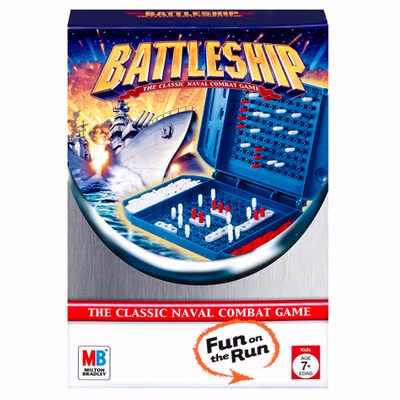 In Travel Battleship, each player takes on the role of a Fleet Admiral (presumably) and commands a fleet of warships. Each player is hunting down their opponent and attempts to hit their opponent’s warships, sending them to rest on the ocean’s floor. This is the same game as the non-travel sized Battleship and plays exactly the same way. However, because it is small, light, and travels easily, you can take this family classic game with you on overnight trips, long getaways, or just keep it in the car to help the little geeks kill time during your morning and afternoon commute.

This game is comprised of 2 small player grid boards, 10 ships (5 per players), and a whole mess of white and red colored pegs (used to identify “hits” and “misses”). All the components are made of durable plastic and fit snugly on the game boards. All the game pieces fit easily in one or both grid boards for easy set up, clean up, and travel.

To set up the game, each player takes one of the two grid boards and opens them up. The grid board sits on the lap or table in the same way as a laptop top computer. The  bottom portion of the grid board is for the player to arrange their five battleships. The battleships can be arranged in any pattern the player wants. At no time can a player rearrange their ships when the game starts. It is therefore in the player’s best interest to be as random as possible with their ship placement.

The top portion of the grid board is for the player to keep track of their “hits” and “misses”. Once the players have arranged their fleet on their grid board, place the white and red pegs in a space where each player can easily reach them. Optionally, you can separate the pegs and have them contained in the grid board storage tray. This provides each player their own pile of pegs to use. Each player should sit opposite of one another and arrange themselves so that their opponent cannot see the top or bottom portions of their grid boards. The game is now ready to play.

On a player’s turn, using the top portion of their grid board, calls out a grid coordinate. This is done by calling out a row letter followed by a column number (for example, “B9”). Where the row and column intersect is the point on their opponent’s bottom grid that is struck. One of three possible outcomes can occur at this point:

Game play continues with each player declaring one grid coordinate at a time and marking down the results with either a red or white peg. The first player to loose all 5 of their ships looses the game.

Since this is a travel game, I would be remiss if I didn’t mention how to clean up the game. Each player places their 5 battleships on their bottom grid. The pegs can be placed in storage trays to the left and right of the bottom grid. The grid board itself snaps shut, securing all the game bits. All that remains of the game are two slightly larger than a wallet sized game boards that fit easily in a backpack, purse, or even back pocket.

The non-travel version of Battleship is already a bit hit in my family. My oldest little geek and I have gone head-to-head at the kitchen table a number of times. It will come as no surprise to me that the travel version should be just as popular. When my sons saw the game in the kitchen when they came home from school, they immediately recognized it for what it was and were fascinated by its compact size. When I told them it played exactly like the larger version of the game, they were very excited with the idea of bringing it with them on camping trips or playing it in the hotel. They even wanted to go play with the game in their rooms! Silly, considering they had the larger version on the game shelf available to them, but one cannot defy the awesome pull of something new.

When I asked them what they thought of the game and how it would play, my two little geeks had the following to say:

Oh, if only we could somehow tap the excitement that comes from children and force it through a piston of some kind to run a large engine. Imagine the unlimited potential of continued energy!

As I said earlier, Battleship is already a favorite of my oldest little geek and fast becoming a favorite for my middle little geek, too. The three of us have spent a good deal of time at the kitchen table playing the deadly game of “cat and mouse’ that is Battleship. The travel version of the game arrived with perfect timing with summer approaching quickly and the last days of school now visible on the distant horizon.

Our family travels a lot and we do most of our traveling by vehicle. Many of our trips are just day trips. We like to travel to the Twin Cities and go to the zoo, the Mall of America, the Childrens’ Museum, or just go play “tourist”. We also love to go camping and hiking as we are very active in the Geocaching scene. Having activities for our little geeks in the car is essential to keep a Zen like atmosphere in the cramped quarters of our van. Failure to do so always results in the shortest of trips becoming long dramatic episodes. Having travel games at the ready is a fantastic way for our little geeks to keep busy, interact with each other, and not disrupt said Zen. The travel version of Battleship works particularly well in the car as my two oldest little geeks sit in different rows in the van. Since Battleship is a game played by talking to each other, there is no need for them to sit next to or even be within close proximity to one another to play. Additional, because that game is so small, they can easily play it on small surfaces such as on a table in the motel room, on a picnic table, or a chair tray on airplanes.

But smallness does have its cons. This is particularly true when it comes to the game bits. They are very small, especially the pegs. While not a problem for most players, your little geeks might have the occasional issue of keeping them in the tray, accidentally spilling them on the ground. Because they are so small, the game bits do pose as a choking risk and caution should be taken to ensure that all the bits are accounted for if you have tiny little geeks around the home. In our family, we have addressed this possible issue by placing the entire game in a large Zip-Lock freezer back. Everything in one place makes it easier to transport and keep track of.

If you are in need of a fun classic game this summer, or whenever, do give this game a try. If Battleship is not your game of choice, Hasbro has released a number of games under the “Fun on the Run” title of small compact games. Odds are there is one or more of these games that is perfect for your family.