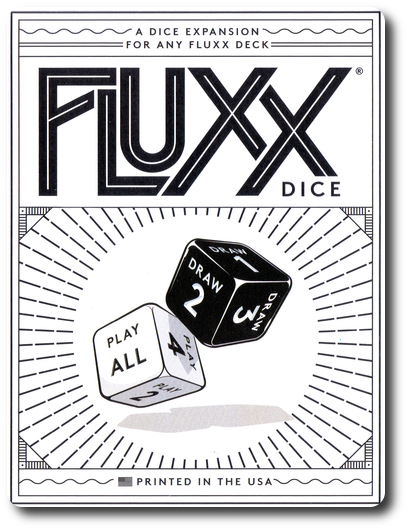 American author Barry Ritholtz said, “You can blow on the dice all you want, but whether they come up ‘seven’ is still a function of random luck.” Random and continues change are the trademarks of the Fluxx card games. This expansion introduces more randomness to your randomness, enticing players to push their luck even further.

Fluxx Dice is a game expansion that can be used with any Fluxx card game. The game expansion comes with 2 dice and 5 cards that are meant to add a new twist on the already very twisty Fluxx game. The cards are made of the same material as the other Fluxx game cards and the dice are large custom six-sided die. Caution should be taken before adding the cards to your favorite Fluxx flavor, as there are no marks on the cards to suggest they are part of the Fluxx Dice game expansion. 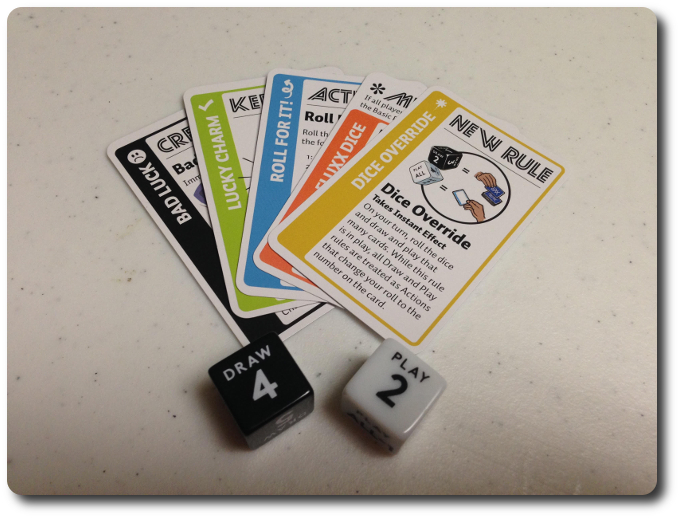 What you get in the box

To use Fluxx Dice, set the 2 dice to one side of the game playing area and place the Dice Override card and the Meta Rule card next to the Basic Rules card during game set up. Then shuffle the 3 remaining cards that comes with the game expansion with the Fluxx game cards.

Pretty easy, but how does this new game expansion work? I’m glad you asked…

The Role of Dice

The game expansion comes with 2 custom six-sided dice: the Draw die (black) and the Play die (white). The Draw die determines how many cards the player will draw during their turn if it’s in use. Number values range from “1” to “6”, meaning a player could draw a lot of cards or hardly any.

The Play die determines how many cards the player can play on their turn if it’s in use. Number values range from “1” to “4”, as well as having a “Play All” (with allows the player to play all their cards) and “Play All -1” (which is the same as “Play All”, but the player must keep one card in their hand).

The Dice Override card and the Meta Rule card describe how the dice are used during the game, including what happens when the cards are not in use. 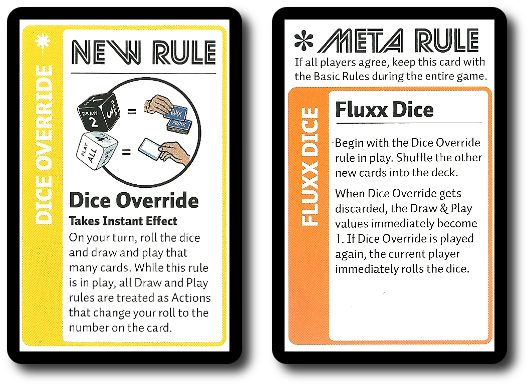 More Action for Your Roll

The new “Roll for It!” Action card allows the player to roll the Draw die, even if the dice are not currently in use. The Action card is played as normal and the player rolls the Draw die, resolving the action’s effect based on the rolled results. Possible outcomes include: 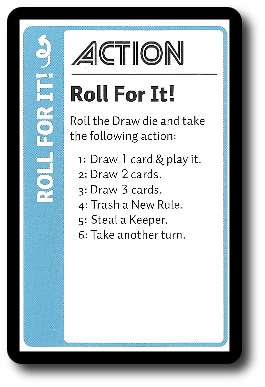 The new “Lucky Charm” Keeper card will not help a player win the game, unless the Goal card in play suggests that victory can be won by simply having “X” number of Keeper cards. Instead, the Keeper card in Fluxx Dice is a useful tool that can be leveraged to offset the random results of a die roll. Very handy and it will make the player who owns it a target. Everyone will want this Keeper card if the dice are in use. 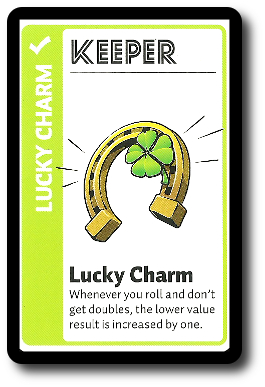 The new “Bad Luck” Creeper card cannot stop a player from winning the game, but it sure can make it difficult. If the player is unlucky enough to randomly draw this card, they are stuck only playing 1 card per turn and can only ever roll the Draw die. However, if any opponent ever rolls double “1’s” when using the Draw and Play dice, the Creeper card is given to them as a “reward”. If the player ever draws or takes the “Lucky Charm” Keeper card, they can protect themselves from bad luck. 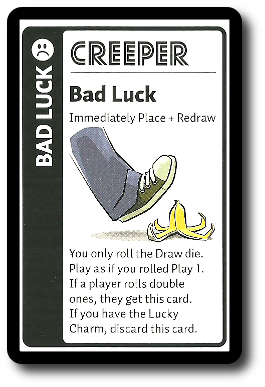 Ending Whatever Game You Are Playing

Fluxx Dice does not change the victory condition or provide a new Goal card. Your Fluxx game will end in accordance to the Goal card currently in play.

To be brief, those who already enjoyed Fluxx card games enjoyed Fluxx Dice, but not completely. According to one Child Geek, “I like that we roll dice now, but now I hate the dice instead of the cards”. Indeed, players have traded one sore point for another with the addition of the game expansion. A Parent Geek said, “I don’t understand why they made this. The game was already random. I guess they just wanted to play with dice.” Very possible. Finally, a Gamer Geek said, “Incredible! I didn’t think it was possible, but they went and actually made Fluxx even worse. That’s a rare feat!”

The Child Geeks, despite their initial confusion about the dice, came to really enjoy using them in their games. Most of the Child Geeks thought the dice improved the game play, and by “improved”, I mean made the game even crazier. The same cannot be said about the Parent Geeks. The dice were seen as an unnecessary component to a game that wasn’t in need of anything. They enjoyed games with the dice, but were undecided if they should be used, resulting in a mixed level of approval. The Gamer Geeks never once gave the game expansion a serious look. A few of the Gamer Geeks enjoyed Fluxx games, but none of them found the game expansion to be worth their time or use.

Most game expansions either address a shortcoming or expand on a strength. Fluxx Dice does neither. If feels completely unnecessary. All it does, both literally and figuratively speaking, is add more randomness. I can only imagine the intent of the game expansion was to add dice and change-up the game play a bit. Which it did. So, in that respect, the game expansion succeeded marvelously.

But not for the better. The expansion didn’t expand the game or add any depth. If just added more stuff that didn’t do anything to improve the game. It’s still Fluxx, but now with dice. Dice, I might add, that are not always used. So now you have these dice that start in play, but can be removed from play. So why use them in the first place if they are as susceptible to being removed from play as any card?

Because this is Fluxx, that’s why, and in Fluxx, players learn that everything is in a state of change. It’s fitting that a game expansion meant to randomly modify outcomes be just as unstable as the rest of the game.

What we are left with is a game expansion for a game that didn’t require it. One could place a value on such a thing based purely on needs and wants, in which case, Fluxx Dice is of little value. But let’s not be hasty. Fluxx games appeal to players who are looking for casual games that are never the same game twice. Fluxx Dice furthers the appeal of any Fluxx game by adding heaps and heaps of additional randomness. Instead of a flip of the card, a roll of the die now determines outcomes and actions. This is a game expansion for those who just want another way to enjoy the game. If you are such a person, do roll these dice and see if you like the results.