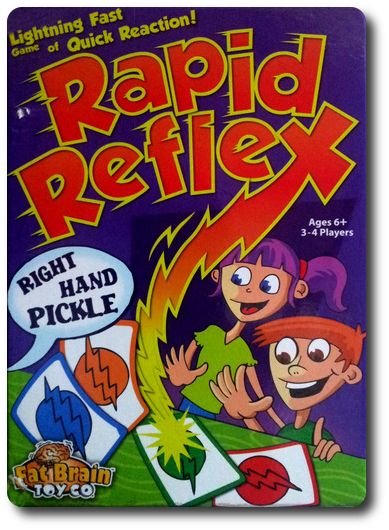 Michio Kaku said, “The human brain has 100 billion neurons, each neuron connected to 10 thousand other neurons. Sitting on your shoulders is the most complicated object in the known universe.” I think a close second is the United States federal tax code. Seriously, it’s a mess. However, if given enough time and study, even the most complex can become simplistic. Ironically, the most simplistic can become exceedingly complex if no time is allowed for the human brain to think it through. In this game, you’ll be asked to do something very simple very quickly. Expect a challenge.

Rapid Reflex, designed by Peggy Brown and published by Fat Brain Toys, is comprised of 80 Action cards and 32 Reflex cards. Both card types are durable and are as thick as your standard playing card. The Reflex cards are slightly bigger than the Action cards (which are your standard card size). The quality overall is about average for most small box Card games.

To set up the game, first separate the two card types into different decks: a Reflex deck and an Action deck. The card types are different sizes making this a quick and easy exercise.

Second, sort the Reflex deck into 8 different stacks. Each stack will contain 4 cards of the same color. The colors are red, orange, blue, yellow, green, brown, white, and pink. Organize the stacks so that all the players can reach them from their sitting positions without difficulty. The game suggests 2 rows of 4 stacks each. This works, but feel free to organize the stacks in any way you like as long as the players can reach any of the cards without issue.

Third, shuffle the Action deck and pass it, face-down, to the first player.

That’s it for game set up! Time to test your reflexes!

Rapid Reflex is played in turns with no set number of turns per game. During each turn, one player will be the “Reader”. All the other players will be participating at the same time, making Rapid Reflex a Real-Time game. The goal of the game is to collect the correct cards faster than your opponents by slapping cards, which makes Rapid Reflex an Action/Dexterity game, as well.

A typical turn is summarized here.

The Reader draws the top-most card from the Action deck. The Reader SHOULD NOT reveal the card to any of their opponents.

Each Action card lists a hand (right or left) and an object. The Reader should now read the card quickly and clearly out-loud. For example, “Right Hand Pickle!” The Reader SHOULD NOT state the color. 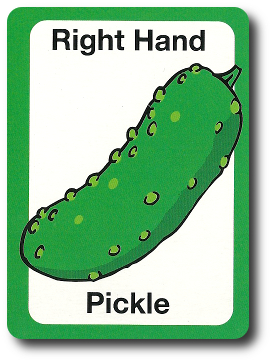 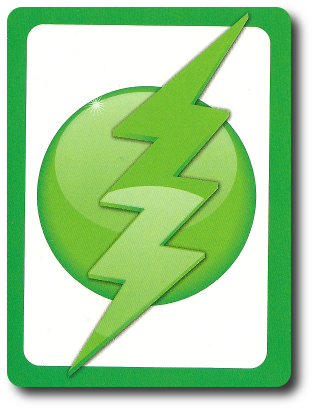 There are a few exceptions to this rule…

The Reader now places the played Action card at the bottom of the Action deck and passes the deck to the player to their left (clockwise). This player is the next turn’s Reader. This ends the turn and a new turn now begins starting with step 1.

The game ends when a player collects one Reflex card of each color (8 in total).

You can play the game with 5 players if you designate one player to always be the Reader. This works out great if you have a group of Child Geeks and only 1 Parent Geek.

Like most Action/Dexterity games, speed and accuracy is everything. This oftentimes means that strategy and tactics are not present since both require time and planning. Throw in the Real-Time game playing, and Rapid Reflex is very much like Slap Jack. This will most likely appeal to the Child Geeks who have always enjoyed games that can be played fast and have very simple rules.For the Parent Geeks, I think we’ll see a positive endorsement if the game is well received by their Child Geeks, but I doubt they’ll suggest that Rapid Reflex is a game they would want to play with their peers. The Gamer Geeks will undoubtedly reject Rapid Reflex faster than the game is actually played.

Teaching Rapid Reflex is best done with a few quick examples. When teaching the game, make sure all the players understand that they SHOULD NOT slap Reflex cards if they already have that Reflex card color. Other than that, just make sure they use the correct hand and beat their opponents to the Reflex card. It’s that simple. Note that the Reader does have to read the card, but any Child Geek who cannot read can skip this role in the game without issue. This gives the Child Geeks an advantage, since they are always playing and the older players have to take turns not playing. It actually works out pretty well, making Rapid Reflex a game that only requires its players to know the difference between their right and left hand. Individuals who are color blind will not be able to play this game. And so, after teaching the game to my two oldest little geeks, I asked them their thoughts on the game so far.

“I just need to make sure I remember which hand to slap with!” ~ Nyhus (age 6)

If you are playing with Child Geeks who hesitate when you ask them to raise a specific hand, I suggest the Reader first say the hand, pause for a second or two, and then say the object. This gives the Child Geeks a very short (but oftentimes important) few seconds to remember which hand to use.

The Child Geeks all enjoyed Rapid Reflex. The older Child Geeks did better than the younger Child Geeks not because they were faster, but because they had more confidence. They also knew more about the objects stated in the Action cards. For example, very few of our younger Child Geeks could remember what color a ruby was. This gave the older Child Geeks a clear advantage, but not a big enough one to make the game one-sided. The younger Child Geeks gained confidence and quickly closed the gap between them and their older peers. According to one Child Geek, “This game can make you crazy. I totally forgot what color an igloo was!” Do expect your players to suffer analysis paralysis at times as they quickly scan the table for the color that they suddenly realize they forgot. Another Child Geek said, “Slapping the table doesn’t hurt. Slapping a color you already have does.” Yes, the Child Geeks often became so excited they slapped Reflex card colors they already had, resulting in them losing the card. When all the games were over, the Child Geeks rapidly agreed that Rapid Reflex was a good time. 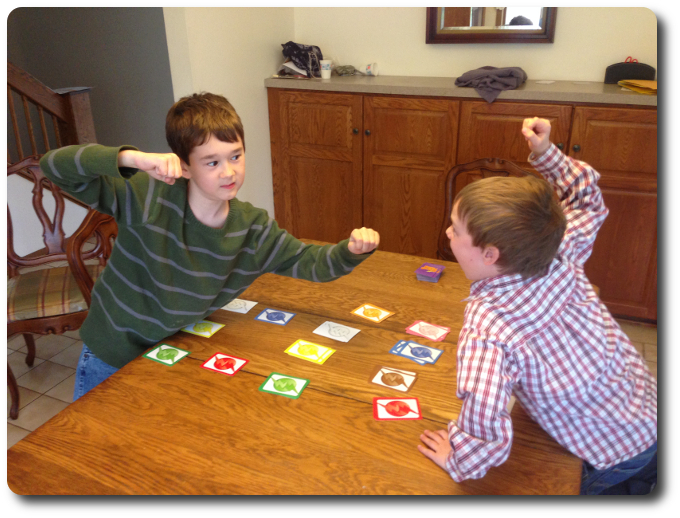 My little geeks can be very competitive….

The Parent Geeks enjoyed their time with the game, but only when they played it with their Child Geeks and family. According to one Parent Geek, “The game is fine, but it’s a bit boring. My kids can play it pretty well, but I find myself just going through the actions.” Another Parent Geek said, “Great game for the kids. Not a game I would want to play with adults.” In the end, all the Parent Geeks voted to approve it as a family game.

The Gamer Geeks played the game, thought it was “dumb” and moved on. A few Gamer Geeks cared enough to give me a few quotes. According to one Gamer Geek, “Great game for kids. Kids. I cannot stress that enough. This game is for kids.” On that point, all the Gamer Geeks agreed. Well, that and rejecting the game.

Rapid Reflex does two things right. First, it’s a great exercise to teach your Child Geeks the difference between their left and right hands. Players MUST be able determine which hand they need to use and quickly. Second, the game does a great job of focusing a player’s thinking. When the Reader says the object, a mental image will flash in front of the player’s eyes. The player must then quickly match a color and slap it. Game-wise, it doesn’t sound like much is happening. At a neuron level, there’s a lot of activity going on. That’s great stuff for a young developing mind.

For older minds like mine, the game is pretty bland. Clearly, this is not a game for older and more experienced players who are looking for a challenge. However, I’m sure I’ll find this game devilishly hard when I’m in my 80’s. Until then, it remains a game I enjoy playing with my kids because my kids are playing it with me. It’s not the game I am enjoying, per sa. Rather, it’s the activity and the company I’m with. If you are looking for an easy to teach game that will keep your Child Geeks engaged, look no further than Rapid Reflex.