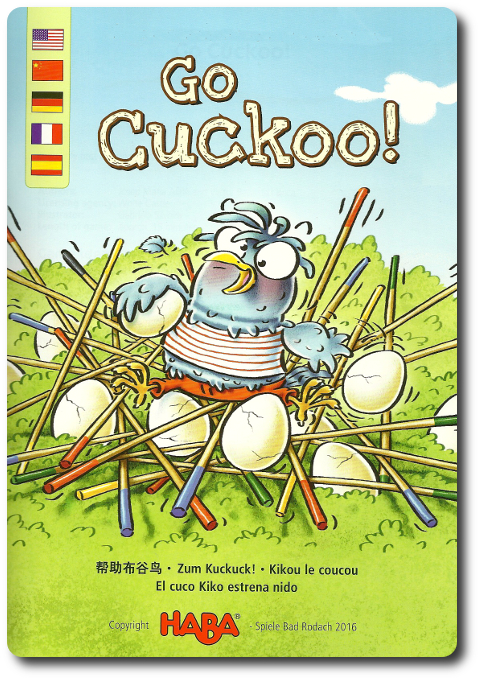 The cuckoo bird is a marvel of evolution. It is, by all accounts, dumber than a box of rocks, clumsy, and prone to accidents to the extreme. This species of bird should have long since disappeared from the face of Earth, but it continues to thrive for reasons that no scientist can explain. In this game, you’ll be helping this awkward bird build one very unsafe nest.

Go Cuckoo!, designed by Josep M. Allué, Víktor Bautista i Roca and published by HABA games, is comprised of 1 Kiki Cuckoo figure, 70 wooden sticks, and 20 Cuckoo eggs. The game is contained in a can which also acts as the “nesting site” of the cuckoo during the game, making it an integral part of the gameplay. Like all the HABA games I have seen, the components are very high quality.

To setup the game, first place the lower half of the game can in the middle of the playing area. This is the “nesting site” of the cuckoo bird.

Second, take all the sticks into one hand and place them in the nesting site can, releasing them so they remain in the can, but spread themselves out. 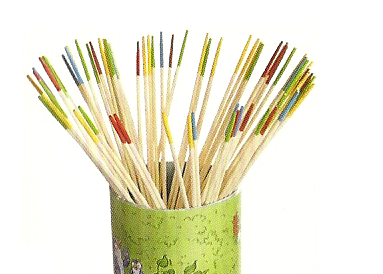 Third, distribute the Cuckoo eggs so each player has the same number of eggs. Any leftover eggs are removed for the duration of the game.

Fourth, place the Kiki Cuckoo figure next to (not in) the nesting site can.

Go Cuckoo! is played in turns with no set number of turns per game. A player’s turn is comprised of sequential steps which are summarized here.

The player must again pull another stick from the nesting can. The top color of the stick MUST match the bottom color of the previous stick pulled. The below image shows a visual example of three sticks pulled by a player on their turn.

The player now sets their pulled sticks (as few as one or as many as three) horizontally across the nesting site can. This creates a thatched-like pattern and provides a supporting base for the cuckoo eggs.

If the player was able to pull a stick with two matching colored ends before their third and final try, they can place one Cuckoo egg over the top of the nesting site can, using the horizontally placed sticks as a support. The goal here is to place the eggs so they do not fall into the can or out of the can.

It’s also very possible that sticks placed to create the horizontal portion of the nest will fall to the table. If this happens, the current active player must pick up the sticks, add them back to the nest, and their turn immediately ends. 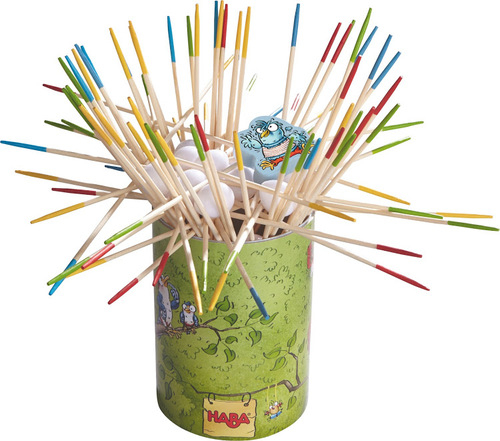 The Child Geeks loved this game. Loved. It. Especially the younger Child Geeks and the non-gamers. According to one such Child Geek, “The game is so much fun and so hard, too! I can’t stop dropping eggs!” A gamer Child Geek said, “Good game because it challenges you to think ahead and to have a steady hand.” All the Child Geeks understood how to play the game and could play it on their own without adult supervision. The biggest complaint heard is that 6 or more players couldn’t play at the same time. Other than that, the Child Geeks had a great time and they collectively voted to fully approve the game, finding it to be the perfect mix of dexterity and fun.

The Parent Geeks also enjoyed the game, but were not as vocal or as hyperactive about it. According to one Parent Geek, “A great game for the family and with friends. I like how you have to build the nest and then balance eggs on the nest. Gives you a real incentive to build the best you can, while not building too well or you’ll help the competition.” Another Parent Geek said, “Oh, this game is just too much fun and really frustrating, too. I can’t help but groan out loud when my egg falls or cheer when it stays in place!” Like the Child Geeks, the Parent Geeks quickly learned how to play and had no problems playing the game without continuously referring to the rules. When the games were over and all the eggs were safe (or broken), the Parent Geeks voted to approve Go Cuckoo!

The Gamer Geeks really wrestled with this one. At first, they just thought Go Cuckoo! was a variant of Pick Up Sticks, a dexterity game we all have played at one time or another as children. This didn’t interest them in the slightest. When they started to play the game, they quickly saw that it was Pick Up Sticks, but more. Much more. According to one Gamer Geek, “I wasn’t digging this game until I started playing it. The game is more than just dexterity. You have to think through you moves and set yourself up for success and setup you opponents for failure. Really fun, but exceptionally light game.” Another Gamer Geek said, “I’d actually play this with my geek elitist friends. I know, right? I’m as surprised as you are. I think it would do really well as a filler.” What really appealed to the Gamer Geeks was the hidden complexity of the game that lies just below the seemingly light dexterity game at its surface. The game surprised the Gamer Geeks with its depth, tactics, and strategy. When the Cuckoo was safely nested, the Gamer Geeks voted to approve the game.

While I am not surprised that the Parent and Child Geeks enjoyed Go Cuckoo!, I am surprised at how much the Gamer Geeks enjoyed themselves and the game. I did not expect them to approve it, but I did expect some of them to like it. I was delighted to see the gaming elitists have so much fun with such a simple game. They found at the game’s core exactly what they are always in search of: an entertaining challenge.

As for me, I really enjoyed the game with family and friends. Yes, it’s light and yes it’s pretty straight forward (4-year-olds can play this game, for goodness sake), but like the Gamer Geeks, I really enjoy the challenge of attempting to be the first to safely nest all my eggs and place the cuckoo bird. Much like Jenga, the game has a way of entrancing you as you remove sticks, carefully place them, and then balance eggs with strong hopes of not upsetting the nest. As the game progresses, the stacks get hire and the tension grows. When the game ends, it ends on a high note and you are left feeling like you want to play the game “just one more time”. HABA has a fun game here and it provides enough depth and challenge to entertain gamers of all ages and skill levels. Do try this fun game when the opportunity presents itself.

This game was given to Father Geek as a review copy. Father Geek was not paid, bribed, wined, dined, or threatened in vain hopes of influencing this review. Such is the statuesque and legendary integrity of Father Geek.Save