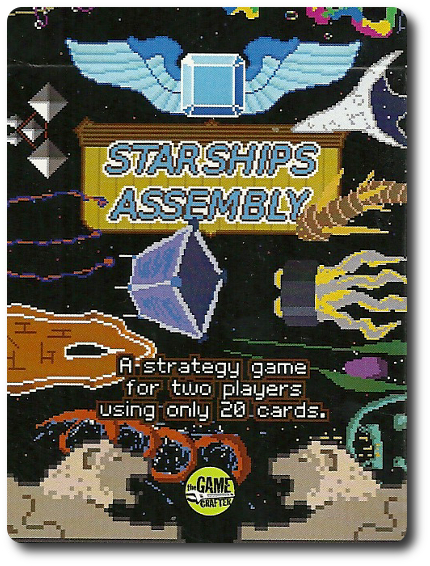 In the future, mankind will roam the stars in giant spaceships the size of contents. The captains of these ships meet to negotiate terms of peace, while at the same time plotting to crush their enemies. You are one such captain and you have formed alliances with others. Will you offer the olive branch of peace or fire the laser disintegrator pistol of war?

Starships Assembly, designed and self-published by James C. Jenista via the Game Crafter, is comprised of twenty cards. The cards are as thick and as durable as your standard playing card. The rules are not included withe the game and must be downloaded (for free) from the game’s official website. The artwork, also by James C. Jenista, has a very stylized look and feel.

To set up the game, first have the two players sit across from each other.

Third, deal four cards face-up in between the two players to create a row of cards.

Game setup is now complete. Determine who will go first and begin.

Of Captains and Spaceships

Each card in the game represents one captain and their spaceship. The end of the card used depends on what stage of the game is being played and how it was deployed. When the game first begins, the card end with the Captain is used. When the peace treaties inevitably breakdown, each captain returns to their ship and the Spaceship side of the card is used. 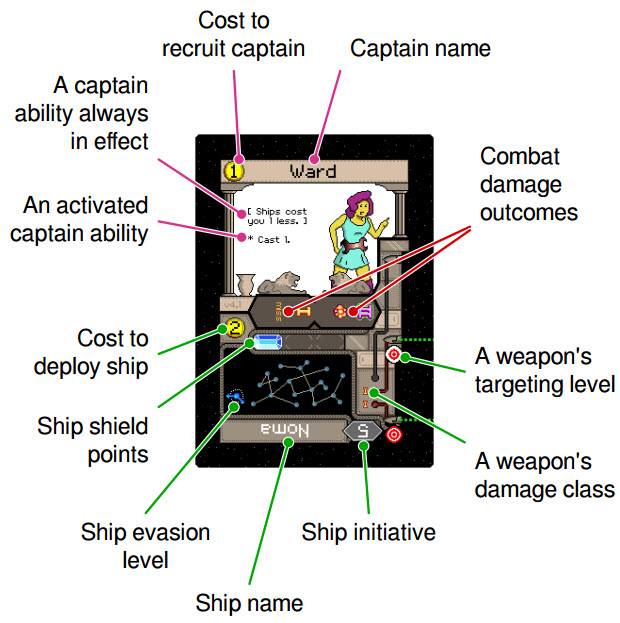 In Space, No One Can Hear You Debate

Starships Assembly is played in phases and turns. In total, there are 3 phases to the game: Lobbying, Assembling, and Open Warfare. Or if you like, the start of the peaceful negations, the eventual breakdown, and the inevitable fighting that ensues. In this game, you cannot talk your way out of war. You can only stall for time.

The first player must now make a choice. They can either take one face-up card of their choice or draw one face-down card, adding the selected card to their hand.

Players now reveal their cards and must select only two to keep. All other cards are “released” (discarded) and are placed face-down on the bottom of the draw deck.

Cards in the player’s hand can now be played as a captain or as a ship. Captains give the player abilities they can use during their turn, while the spaceships will provide the player firepower when war is declared.  A card cannot provide both a captain and a spaceship.

The top three cards from the draw deck are drawn and placed face-up. These cards represent the “agenda” and can be selected by any player on their turn. There are always three cards in the agenda.

When a player has a captain in play they can cast a vote. Votes are the equivalent to currency in the game and allow the player to pay the cost of a captain or deploying a spaceship.

During this phase, war could be declared. If either player has five spaceships in play, the last card in the draw deck is drawn, or war is announced via a player’s captain’s special ability, all hell breaks loose.

The cards are now reshuffled and used to track damage instead of votes. Players take initiative turns (noted on the spaceships) targeting each others spaceships and blowing them to space dust. Targeting levels and damage class is used to determine the outcome. Not every ship can target another ship, meaning it’s impossible for some spaceships to fire upon others.

The player who eradicates their enemy wins the game and gets to celebrate their victory in the cold vacuum of space.

For more information on Starships Assembly, visit the game’s webpage on the Game Crafter.

The Child Geeks immediately caught on, having played other games similar to Starhips Assembly in the past, and got right to declaring war. I swear they only wanted to fight, but I cannot blame them. According to one Child Geek, “The first part of the game is OK, but it gets really fun when you start blowing each other up!” Fun and fast, too. Space combat in Starships Assembly is pretty brutal. Point, click, boom. Another Child Geek said, “I really like it. It’s small enough to play with your friend at lunchtime, but it can be a bit long sometimes.” Long? You bet. If the players take their time amassing their forces, a game could take close to an hour. But a Child Geek game never lasted any longer than 20 minutes. They were thirsty for war. When the battles were over, the Child Geeks voted to approve the game.

The Parent Geeks found Starships Assembly to be a fun one to play with their kids, but it feel a bit flat when playing with just adults. According to one Parent Geek, “I think it has more to do with me than it does with the game. I like to play against more than just one person.” Another Parent Geek said, “A fun game and surprisingly more involved than I originally thought. I’d play this with my kids or a co-worker over a lunch break.” The Parent Geeks were not fans that the game didn’t come with rules, however. As one exasperated Parent Geek said, “Why do I have to complete the game for the game designer by printing off the rules? Shouldn’t those be included? That’s like not including the steering wheel in a car when you buy it.” The Parent Geeks gave Star Ship Assembly a mixed level of endorsement.

The Gamer Geeks found Starships Assembly to be pretty straightforward, but not overly easy. According to one Gamer Geek, “There’s more to this game than you first realize. I was surprised and pretty happy with it.” Another Gamer Geek said, “A solid game that was obviously designed by someone who took their time. It’s not really light, though, nor is it heavy. It plays too long for a light game and is not deep enough to be a heavier game. It strangely works, but is a bit awkward at the same time.” None of the Gamer Geeks were happy with the fact that the rules were not included with the game, finding it to be a pretty cheap move and one they did not agree with. As one Gamer Geek put it, “If you design a game, you design and release all of it. Give players their rules or give their money back.” The Gamer Geeks voted to give Starships Assembly a mixed leve of approval.

Starships Assembly is a fast and fun game, but it falls terribly on its face right from the start. Unfortunately, the instructions for the game are not included with it, meaning the player must go download them if they want to learn how to play the game. Worse yet, the instructions, once printed, are too big to put in the game’s very small box. This gives the game an incomplete feeling and immediately turned off a lot of our players. A real shame, as the game itself is pretty good.

What I like most about the game is how streamlined it is and the multiple levels of consideration you have to put into it. Never to a point where you are overwhelmed by the minutiae of the game’s details, but you can’t be sleepwalking, either. You have to put some real thought into how you want to recruit and deploy your spaceships, act and react to your opponent’s moves. Really, it’s a game of chicken, where each player is subtly moving closer to war. You know how it’s going to end, but not when.

Other than the mess with the rules, I rather liked the game and suggest you play it when you get a chance. I’ve played enough independent games to know that producing them is not cheap and every step possible is taken to reduce the cost to the player. There are just some thing you shouldn’t skimp on, however. The rules being the most obvious in my mind.