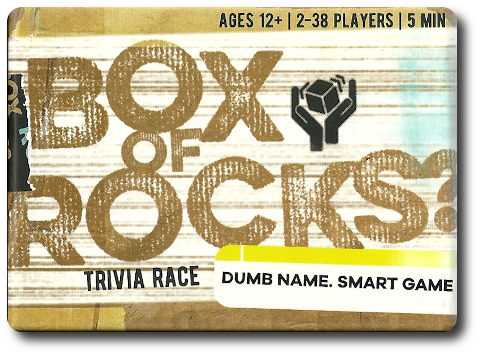 The phrase “dumb as a box of rocks” suggests that the individual is lacking a great deal of common sense, wisdom, intelligence, or any combination of the previous. In this game, your goal is to be smarter than a box of rocks. If that sounds easy, you haven’t met the rocks in this box. Prepare to be humbled as the smartest rocks you’ll ever meet take you to school.

Box of Rocks, designed by Joe Herbert, Dave Herbert, and published by the Haywire Group, is comprised of 100 Trivia cards (300 questions in total), 3 Numbered rocks, 1 Human pawn, 1 Rock pawn, and 1 Game Path card. The rocks are actually fake, but you wouldn’t know it until you look really hard at them. The cards are as thick and as durable as your standard playing card. No artwork to speak of other than the typical minutia that accompanies most Trivia games.

To set up the game, first set aside the Rock and Human pawns, as well as the Game Path card.

Second, shuffle the Trivia cards, making certain that the answer side is face-down. Place the deck in the middle of the playing area. This is the draw deck for the duration of the game.

Third, place the Game Path card next to the draw deck and place both the Rock and Human pawns on their starting positions.

Fourth, leave the Numbered rocks in the box.

That’s it for game set up. Get ready to feel stupid.

Between a Rock and a Dumb Place

The game is played in turns and everyone is on the same team. In this game, all the players will either rise above the intelligence of the rocks or sink to bottom. One player draws a Trivia card, selects a question, and reads it out loud. The answer to the question is on the back of the card and SHOULD NOT be looked at until later in the turn. All the players can now discuss the question and must agree upon an answer. There is no time limit, but players shouldn’t take the game that seriously. 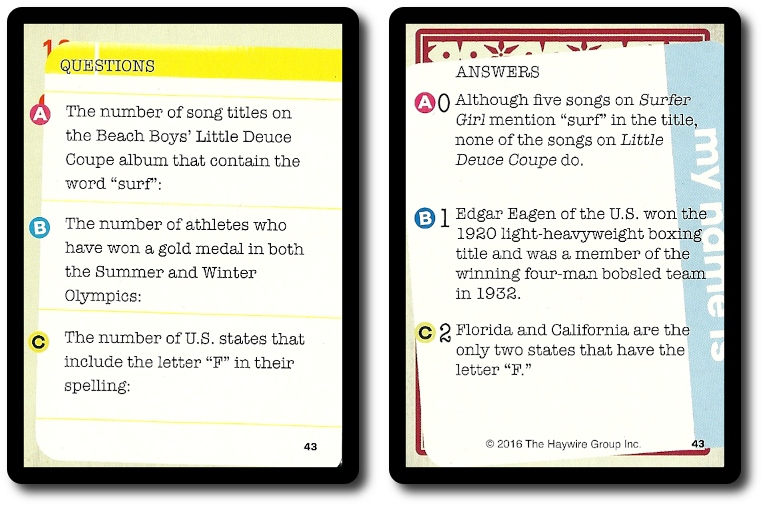 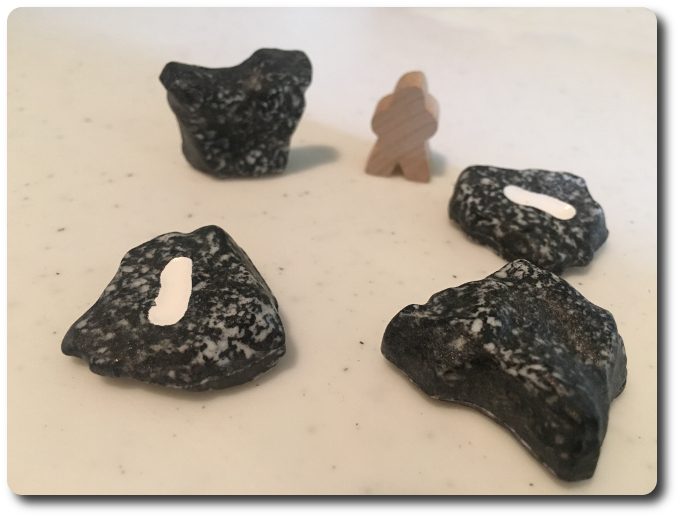 The Rocks and the Meeple the Rocks destroyed

The Trivia card is then flipped over and the answer is read out loud.

This ends the turn. The Trivia card is discarded and the Number rocks are returned to the game box. A new player now takes a Trivia cards and reads it out loud.

If the players win, they have proven to all that they are not as dumb as a box of rocks. If the players lose, it’s best they don’t tell anyone about it.

To learn more about Box of Rocks, visit the publisher’s webpage.

The Child Geeks loved that they were competing against rocks. Even more so when the rocks starting winning the game. According to one Child Geek, “At first I was all like, WHAT?! NO WAY?! After a few games, though,  you start to really respect those rocks.” Another Child Geek said, “Stupid rocks. I hate them.” Love, hate, respect, or recoil, the Child Geeks all learned that Box of Rocks was a one way ticket to Dumb Town if they didn’t work together and really try to answer the questions. Although, I’m pretty sure there were a few who purposely sabotaged the group because they found it fun. I concur. When the games were over and new-found respect for rocks was learned, the Child Geeks voted to approve Box of Rocks. 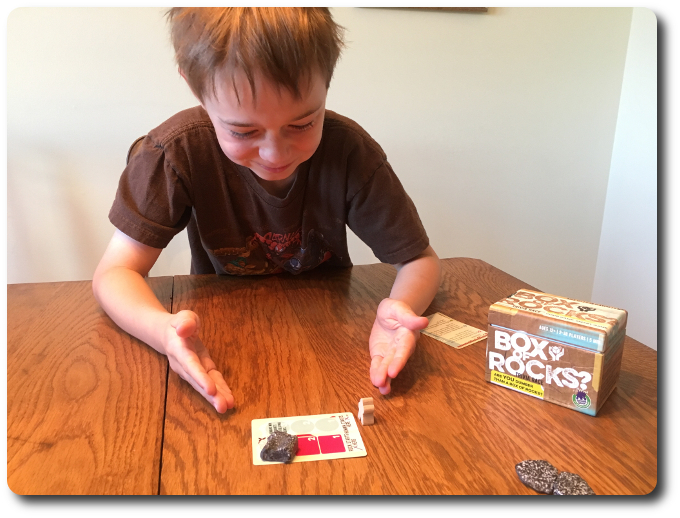 A solid victory for the Rocks! The Human meeple didn’t move once during the game. Stupid meeple…

The Parent Geeks were also highly enthused with the game. According to one Parent Geek, “This game has a lot of wit and humor, but the joke is always on us, the players. How droll.” The Parent Geeks found the game to be perfect for the family and for larger crowds, being able to play with large groups just as easily as smaller groups. As one Parent Geek put it, “The only difference between a 2-player game and a 20-player game is the noise level. That and the number of people who feel stupid.” While many Parent Geeks hesitate to bring out a Trivia game to play, all of them agreed they wouldn’t hesitate to slap this box of rocks down in front of anyone. When the votes were in, the Parent Geeks approved Box of Rocks.

The Gamer Geeks found Box of Rocks to be both amusing and well designed. According to one Gamer Geek, “Brilliant. It’s so simple and elegant, and yet I know I could never come up with it.” All the Gamer Geeks found the game itself to be nothing special. That is, the players answered questions and made points. Very simple. What they found to be outstanding was how the game competed against the players by randomly deciding its own answer, thus creating a very real force of tension and competition. As one Gamer Geek put it, “I never thought I’d live to see the day where an A.I. made out of rocks beat me bloody.” Sticks may break your bones, but stones will make you feel stupid. When the games were over, the Gamer Geeks approved Box of Rocks, finding it to be perfect for game fillers, light entertainment, and endless amusement.

Words cannot describe how creepy these rocks are. I know they are just being rolled to provide a random number, but it’s uncanny how many times the rocks are right. I’ve played the game with 2 people and 15. In both cases, everyone couldn’t believe the luck the rocks were having. If you win the game, it’s because you really know your stuff. If you lose, it’s because you are taking too long. The rocks, being rocks, believe in slowly crushing their opponent. If you give them enough time, that’s exactly what they’ll do.

Of course, players aren’t really competing against the rocks. The Rock pawn acts as a very clever sand timer of sorts. It advances the game play in a way that builds tension, introduces a very strong feeling of competition, and adds comedy. It is, in my opinion, the best thing about the game. Everything else about Box of Rocks is exceedingly ordinary. From the Trivia cards to the team work necessary to answer them.

But such a little thing as a rock made the game outrageously entertaining, propelling Box of Rocks to one of my favorite Party and Trivia games. There were so many funny moments that no one spent any brain power attempting to learn anything from the experience. It was easier and more fun to just laugh at ourselves. This is a light game with teeth that wants you to feel stupid. And it does, because the answers are easy, but the questions are hard. People over think and the rocks just roll. In the end, the real lesson learned is that it’s easy to have fun if you don’t take yourself seriously.

I enthusiastically encourage you to try Box of Rocks. Most Trivia games require players to think in their own head, but not this one. This is a team activity, where everyone at the table will be laughing, talking, debating, and swearing underneath their breath. The focus is fun and this game delivers. Despite literally being a box of rocks, this is not a dumb game. Easy to play, challenging, and thoroughly enjoyable, do play Box of Rocks when time permits. Win or lose, you’ll be smarter for your efforts.