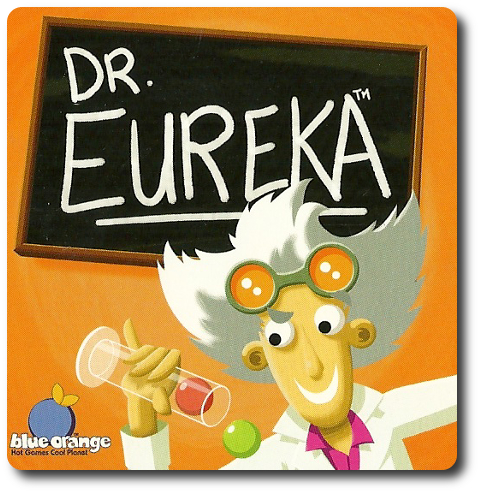 Emmy-nominated host of the television show Brain Games, Jason Silva, said “Creativity and insight almost always involve an experience of acute pattern recognition: the eureka moment in which we perceive the interconnection between disparate concepts or ideas to reveal something new.” In this game, creativity must be pushed by the need to shout EUREKA first!

Dr. Eureka, designed by Roberto Fraga and published by Blue Orange Games, is comprised of 54 Challenge cards, 24 Materials (8 green, 8 purple, and 8 red balls), and 12 Test Tubes. The Materials are colorful plastic balls about the size of a gumball. The test tubes are made of plastic and have a base that allows them to stand on a flat surface. The challenge cards are as thick and as durable as your standard playing card.

Welcome to the Lab

To set up the game, first give each player 3 empty Test Tubes. These are placed in front of the players. 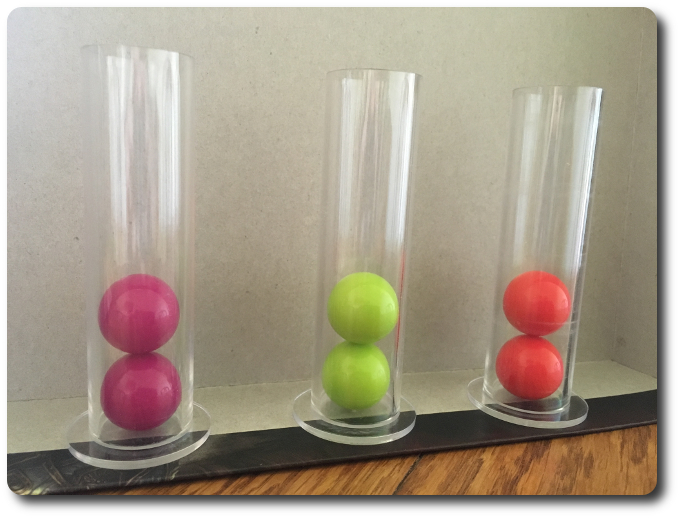 Third, shuffle the Challenge cards and place the deck face-down. This is the draw deck for the duration of the game.

That’s it for game set up. Time to see if we can discover something new.

The Science of Chaos

When all the players are ready to go, the top-most Challenge card is drawn from the draw deck and placed face-up for all the players to see. The revealed Challenge card shows 3 Test Tubes with specific colored Materials in a specific order. This is what each player must now attempt to duplicate from their seated position using their own Test Tubes. 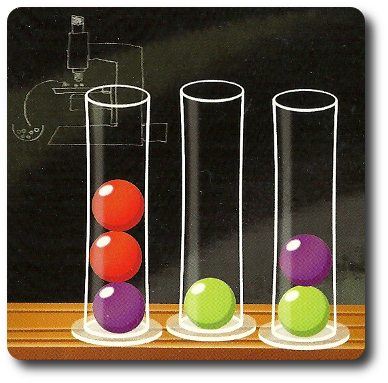 How is this done? Simply put, by mixing and matching the contents of the Test Tubes until the player achieve a match that duplicates the Challenge card image. Transferring the Materials  must be done without touching them. This means the players must “pour” them from one Test Tube to another. Caution and a steady hand must be had, however, as the Materials have a tendency to miss the Test Tube opening and go rolling away.

Spilling the Materials or prematurely announcing the completion of the challenge without accurately duplicating the Challenge card image disqualifies the player for the rest of the round. This forces them to sit out, but they get to enjoy watching the chaos and frustration from afar.

A player must line up their Test Tubes so it matches the Challenge card, but from their seated position. Players can also decide if the Test Tube should be placed with the opening face-up or face-down (in which case the table is holding the Materials in. Test Tubes can swap position as many times as the player likes, as long as they don’t lose or touch the Materials.

A new Challenge card is now drawn and a new round now begins. Players begin the new round with the Materials in their current positions in the Test Tubes. Players never reset their Test Tubes.

The game continues as described above until a player has collected 5 Challenge cards. This player is the winner of the game.

A few game variants are provided for those who like to alter the game play. They are summarized here.

As if the game wasn’t difficult enough, players can make Dr. Eureka even more challenging by forcing the players to hold all 3 Test Tubes at the same time. Players can only place a Test Tube down when they are ready to complete the challenge.

After the Challenge card is revealed, players reflect on its difficulty and then go around the table stating how many moves it’ll take to complete it. Players cannot call out the same number as a previous opponent. The player who provided the lowest number goes first. If they can successfully complete the puzzle in the number of moves they stated or less, they win the Challenge card. If they fail, the player who had the next lowest number takes a crack at it.

The Child Geeks either really enjoyed the game or really, really didn’t. As one Child Geek put it, “This is the most frustrating game I have ever played. These balls won’t stay in their tubes!” The Materials do tend to roll around causing a lot of mischief and delay, as their owning player chases them down. Another Child Geek said, “The game is hard, but it’s a lot of fun, too!” Child Geeks either enjoyed the challenge of mixing and matching or found the process tedious and exasperating. There didn’t appear to be any middle ground when it came time to the vote. Child Geeks were quick to praise Dr. Eureka or turn it down. The end result is a mixed level of approval from the Child Geeks. Clearly, this is a game a child will or will not like based on their temperament. 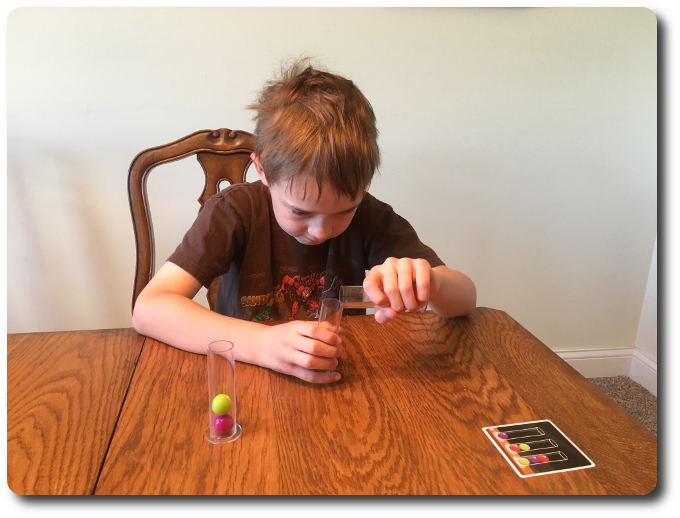 Not the case with the Parent Geeks. Each of our older players had a great time with the game, finding it to be challenging and engaging, with just the right amount of humorous and frustrating moments. According to one Parent Geek, “The is colorful, engaging, and best of all, challenging. I’m really having a good time.” Another Parent Geek said, “I can see why some of the kids didn’t like the game. You really have to think through some of the puzzles, temporarily moving a ball and back again just to move a single color.” One Parent Geek event likened the game to a Rubix’s Cube, but with test tubes. When all the puzzles were solved and Materials secured, the Parent Geeks voted to approve the game.

The Gamer Geeks were highly skeptical, but their worries were quickly forgotten after the game was played a few times. According to one Gamer Geek, “What appeared to be a simple dexterity game at first is anything but. The colors and components make the game compelling and interesting right from the start. The game play is straightforward, but highly involved. This is a great puzzle game.” A few of the Gamer Geeks even mentioned that playing Dr. Eureka with just adults would be a lot of fun, as the challenge level goes up when you have more experienced players. Some of the Gamer Geeks even suggested that Dr. Eureka would be a game worth playing as a filler. In a surprising turn of events, the Gamer Geeks voted to fully approve this game, teaching me once again that one can never assume with the gaming elitists.

I’ll say this for the game, it’s got character. Every aspect of the game is rememberable and strangely remarkable. Everything works very well and when you add in the speed and dexterity necessary to play and win the game, the already less than easy task of solving the puzzle becomes a true challenge for the mind and nerves. It’s this aspect of the game I like the most. Since players have to go fast, they must think fast and have a steady hand. The game is asking a lot from the players right from the start and one never really feels comfortable playing it. Truly, the game challenges your nerves, testing each in turn to master their calm and tighten their focus.

And yet, this is most certainly still a party and family game. Yes, highly competitive players will have a blast, but the competitive component is just part of the game’s equation. It doesn’t mater how fast you are or how steady your hands might be if you cannot solve the puzzle. The only time all the players start at the same point is the beginning. From there, each player has a different starting pattern to work from each round of game play. While this might be overlooked by many, it ensures that none of the players have a starting advantage except through happenstance or dumb luck. Both of which are rare.

Dr. Eureka is a game for all ages. It takes steady hands, a sharp mind, and a lot of tenacity. Players must push themselves to a point where they are in serious danger of letting their Materials  fly around the room, but this push is necessary in order to win. Slow and steady does not win the race, but nor does reckless and rash. Do play Dr. Eureka when time allows. It’s the perfect mix of skill and fun that creates an excellent puzzling time.