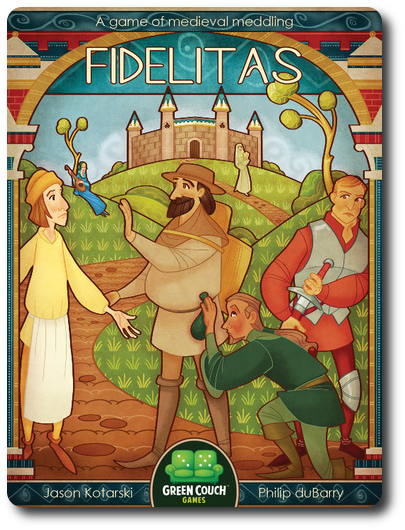 American scientist and inventor, Edwin Land, said “The most important thing about power is to make sure you don’t have to use it.” In this game, the player will be manipulating powerful guilds and its members, while staying in the shadows. The goal is to control the City, but there are others who want the same thing.

Fidelitas, designed by Philip duBarry, Jason Kotarski and published by Green Couch Games, is comprised of 5 Location cards, 1 Castle card, 1 Harbor card, 20 Missio cards, 50 Virtus cards, 1 Starting Player token, 8 Manu Forti expansion cards, and 3 Reference cards. The cards are as thick and as durable as your standard playing card and are of excellent quality. The illustrations by artists Jacqui Davis and Darrell Louder are superb, capturing the different personalities using a style that reminds me of many Disney movie characters I have seen in the past. 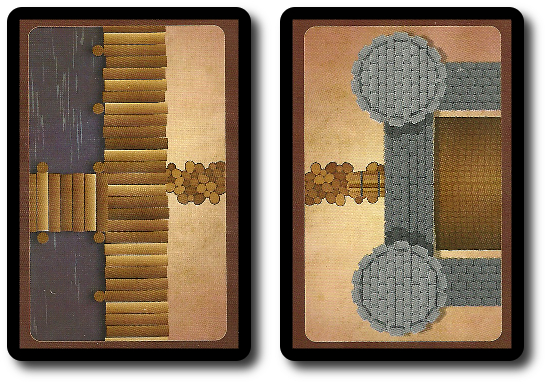 From left to right: Harbor and Castle

Third, shuffle the Missio cards and deal 2 to each player face-down. These cards assign the player a secret goal they attempt achieved during the game. Obviously, players should keep their Missio cards hidden at all times. Place the remaining Missio cards face-down and next to the Virtus draw deck. This is the Missio draw deck for the duration of the game.

That’s it for game set up. Determine who should go first and give them the Starting Player token.

Fidelitas is played in turns with no set number of turns per game. A player’s turn is summarized here.

Each Virtus card represents a member of the City that has power, influence, or information the player needs in order to successfully take the power away from the politically elite. Virtus cards are played to Location cards. The Commerce Guild, Artisan Guild, Judiciary Guild, and the Academic Guild all have secure control over the 5 Locations in the City, or so they think. If a player plays a Virtus card to a Location that matches the Location’s Guild symbol, the effect described on the card immediately takes place. If a previous card was placed in that Location, place the played card on top of it and make certain all of the Guild symbols are showing (necessary for quick scoring). 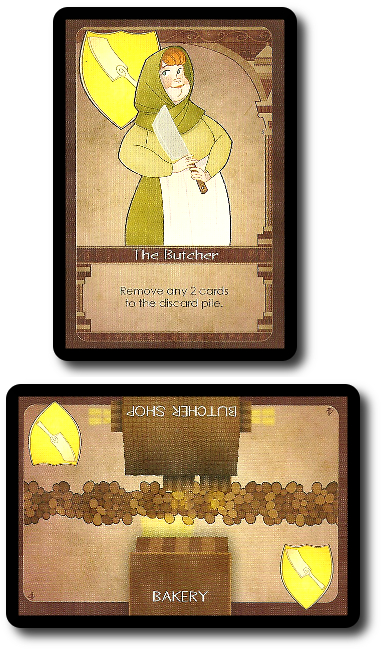 The Church Guild, Harbor Guild, Military Guild, Miscreant Guild, and Entertainment Guild do not have official holdings in the City, but still have influence. These Virtus cards can be played to the different Locations unless specifically restricted or specific requirements must be met. When played, they also trigger an effect. 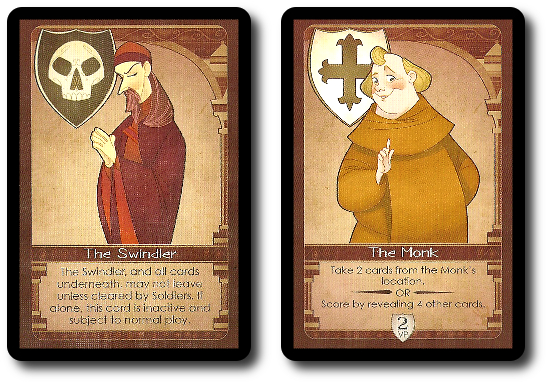 The “Tavern” Location card is a special area of the City where members of the different Guilds can all meet. If a Virtus card is played to the Tavern, the card’s ability is ignored. Instead, the player discards 1 of their Missio cards to the bottom of the Missio draw deck and then draws a new Missio card. Each time a Virtus card is played to the Tavern, the top-most Virtus card from the Virtus draw deck is place on the other side of the “Tavern” (no one wants to drink alone). The only time the Tavern ability is not triggered is when Virtus cards are moved there through an effect. 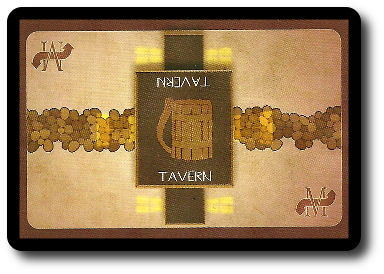 A player may score one or both of their Missio cards during their turn, but only if the conditions to score the Missio cards have been met after a Virtus card has been played. The scored Missio card is placed in front of the player, face-up. 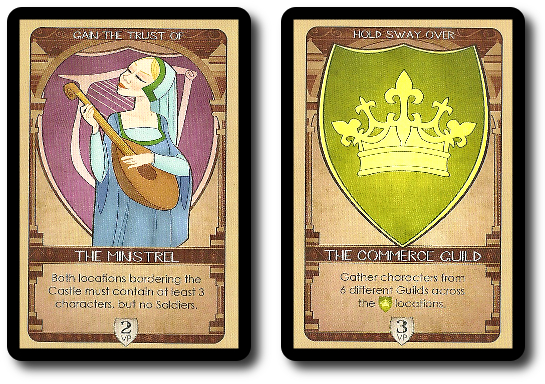 This completest the player’s turn. The next player in turn order sequence now goes starting with step 1 noted above.

The game can end one of two possible ways:

Points are now tallied and the player with the most points wins the game. Ties are broken by counting the total number of Missio cards scored, with victory going to the player who scored the fewest.

The game comes with an expansion and 3 different variants. Each is summarized here.

This game variant allows 4 players to split into teams of 2. Team members sit opposite of each other and table talk is allowed as long as none of the players provide specifics regarding Missio objectives. After a Virtus card is played, the player and their team member may both score 1 to 2 Missio cards. The game continues until either the second Virtus draw deck is exhausted or to 8 points.

Fidelitas can be played with only 1 player. The Tavern is removed during game set up, reducing the available Locations. When the “Thief” Virtus card is played, the player is forced to discard 1 Virtus card if they have more than 2 in their hand. The game ends when the Virtus draw deck is exhausted the first time and points are recorded. The goal is to beat the total number of points earned during the last game.

To learn more about Fidelitas, visit the game’s web page.

The Child Geeks enjoyed the game a great deal. They saw it as a Puzzle game, where the Missio cards detailed the way the puzzle should look when it was done. According to one Child Geek, “I really like this game. I know what I have to do from the very start. I can also mess with other players, which is a lot of fun.” Players can mess with an opponent, but without much in the way of knowing if their energy is being spent wisely. Since all Missio cards are hidden, a player needs to observe the behavior of their opponents and make educated guesses on how best to hinder an opponent’s progress. Not an easy task. As one Child Geek put it, “All I can ever tell from another player’s cards is that they are interested in that specific Location, but I don’t know why.” What was not in question was the love of the game. All the Child Geeks voted to approve Fidelitas. 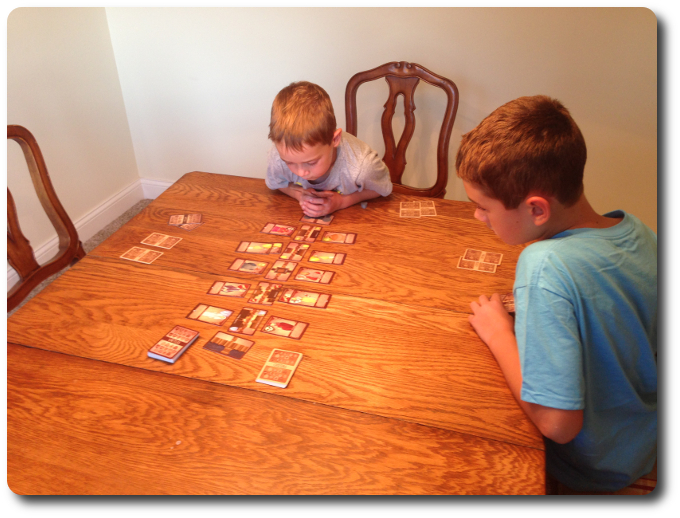 The Parent Geeks also enjoyed the game, finding Fidelitas to be an excellent casual game with just the right amount of tactical and strategic play. According to one Parent Geek, “This game does a great job of challenging you to keep on task with your Missio cards, but you also have to work to stop your opponents. That makes each turn something to ponder. Do I work on my own missions or do I take the time to stop others?” Of course, there is a little bit of chaos in the game, with card effects and random card placements at the “Tavern” Location card, but that didn’t bother the Parent Geeks. As one Parent Geek put it, “The best part of this game is oddly the amount of time you have to put into reacting to other cards. I really enjoyed myself.” All the Parent Geeks voted to approved Fidelitas, for both their families and their peers.

The Gamer Geeks found Fidelitas to be a “so-so” game. It had its moments of strategic and tactical fun, but it was also found to be rather random. The Gamer Geeks did agree that the game play was engrossing enough to make it worth their while, but they also found the game to be lacking enough depth to be something of long-term interest. According to one Gamer Geek, “This is a solid game, but not one I would want to play a lot.” After many games, the Gamer Geeks agreed that Fidelitas was worth their time and perfect as a filler game, but little else. As one Parent Geek put it, “The game has all the trappings of an elitist’s game, but fails to fully deliver when on the table. For what it is, and what it offers, I think it’s a great game filler.” All the Gamer Geeks voted to approve Fidelitas. While not a game they would readily play all day, they loved playing it once or twice at their gaming table.

Fidelitas is a fun game, but we must first define the “fun” it provides. Each player is given 2 hidden goals they must attempt to complete. These Missio cards describe the condition that must be met. Meet it and you score. This means the player will be moving cards and playing them at just the right time to collect points. In theory, that’s not too hard. When you add in the influence an opponent has on the City, be it directly or indirectly targeting the player’s Missio cards, the object of the game becomes much more difficult to obtain. This is where the fun begins, but also the frustration.

Players who do not care for games where the finish line keeps moving will not much care for Fidelitas. The goal is clear, but the amount of effort to reach that goal will shift. What players need to do is keep their cards close to their chest and their intentions even closer. It’s well worth the player’s time to play cards in other Locations to bluff and misdirect attention, and yet, this is not really a game where bluffing and misdirection is at the forefront of game play. It’s just a tactic that is part of the player’s strategy, but it’s not necessary. A player can, if they so wish, just focus on their Missio cards instead of balancing their own progress with attempts to hinder their opponents.

The end result is a solid game that feels a bit slippery. It’s hard to nail down, if the truth be told. You might find yourself liking it during one moment and thoroughly frustrated by it the next. It’s a game that ran hot and cold with our players, but it always ended up running lukewarm in the end. No one disliked it, but nor did they greatly enjoyed it. The general consensus was that it was “good game”. Good, not great, but they all played it again, so who knows. Playtesters are a funny lot. They can be hard to read. The final vote says it all, though.

If you enjoy card games where the need to give a little and take a little is not always clear, where a player’s choice is defined by hidden objectives and reactions to opponents, and the goal is always the same but never the path, then do play a game or two of Fidelitas. You might find that the most challenging aspect of the game is not the goals, but keeping them insight.

One Response to Fidelitas Game Review