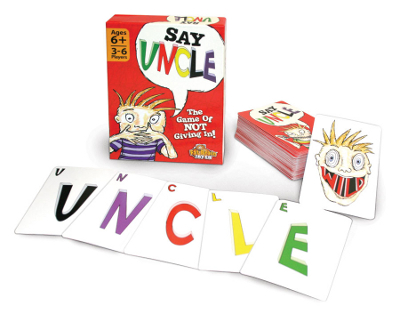 Saying “uncle” is an idiomatic statement meant to express submission. For example, if you were to scream “UNCLE!!!” while being tickled mercilessly or being offered a third piece of pie you really didn’t want, you are telling everyone that you want to stop. In this game, other players will do all they can to get you to throw your hands up in the air and shout “UNCLE!” as quickly as possible!

Say Uncle, designed by Nicholas Cravotta, Rebecca Bleau, and published by Fat Brain Toy Company, is comprised of 40 Letter cards, 36 Action cards, and 4 Wild cards for a total of 80 cards. The cards are made of typical thick card stock commonly used in card games and the illustrations are minimal. Emphasis is put on colors and letters.

To set up the game, first take all the cards and shuffle them together to create one big deck.

Second, deal out to each player 5 cards, face-down. This is the player’s starting hand that should be kept hidden from their opponents at all times.

Third, place the deck of cards in the middle of the playing area. This is the draw deck. Leave enough room next to it for a discard pile.

The game is played in turns with no set number of turns or rounds in a single game. On a player’s turn they will complete the following steps.

Step 1: Play a Card or Discard a Card (and Then Draw a Card)

The cards available to play are summarized here.

These cards come in 4 different colors and represent any letter the player likes (other than the Letter cards already showing). Like the Letter cards, only one can be played during the player’s turn. The only restriction for the Wild card is that it can only be played on an opponent if they have 4 or less Letter cards showing.

There are two types of Action cards. These are “Discard” and “Move”.

Each “Discard” Action card will either allow a player to discard any Letter card of a specific color or a specific letter of any color that is in front of them. Not the player’s opponents. All discarded Letter cards and the Action card used are sent to the discard pile. The player now goes to step 2.

Note that Wild cards can represent any Letter, but the color on the Wild card is used when moving or discarding specific color types. 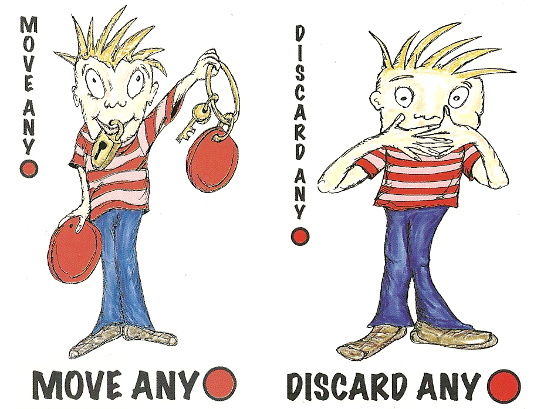 Once the player is done, they draw a new card from the draw deck to bring their hand back up to 5 cards. Optionally, the player can simply discard any card they have in their hand and then draw another one from the deck.

The player now checks to see if they have been eliminated from the game. If the player has the word “UNCLE” in front of them, they are eliminated. Note that you do this AT THE END OF YOUR TURN.  If the player is eliminated, all the cards in their hand and any Letter cards that are in front of them are sent to the discard pile. They can scream “UNCLE!” if they like, but most of the time, the player will simply just frown in frustration. Maybe even swear. My 9-year-old exclaimed “Crud!” a lot.

If they are not eliminated, their turn is over and the next player in turn order sequence now goes.

The winner of the game is the last player remaining who has not been eliminated.

Say Uncle is a very straight forward and somewhat chaotic game of luck and timing. It’s also a child’s card game. Taken as a whole, I doubt very much the Gamer Geeks will show any interest in it. The Parent and Child Geeks should both endorse it. Emphasis on the “should”. There is nothing in the game to suggest it will automatically get rejected. It’s simple to learn, challenging enough to keep players engaged, and very casual. All three are important to the Parent and the Child Geeks. What will be the determining factor is how much fun they have. If the cards are going to be as random as I think they will be, both the Parent and the Child Geeks might become exasperated and start to lose interest.

Teaching Say Uncle is not difficult and should only take you about 2 to 5 minutes. Players will need to know how to read and how to spell, but only at a first and second grade level. Child Geeks who cannot yet read can easily play this game with a partner.

After teaching Say Uncle to my two oldest Child Geeks, I asked them their thoughts on the game so far.

“Very simple game of spelling a very simple word. Should be simple to play.” ~ Liam (age 9)

My 6-year-old is correct. I wrote down the word “UNCLE” on a piece of paper for him so he could play the game using pattern matching instead of reading. I also made sure he could identify and tell me the difference between the two action card types. I don’t think he’ll have any problems playing the game. I’m curious to see if I’m right.

The Child Geeks were mixed when it came to their final approval of the game. For the most part, all the Child Geeks understood how the game was played and played it to the best of their ability. It was the lack of being able to play well that got them frustrated, however. A player is dependent on the cards they have in their hand, and if they don’t have a good hand, they can’t interact with the game. This happened rarely, mind you, but it left a rather negative impression on the individual players who were unfortunate enough to have to discard and draw several times in a row or were unable to address any Letter cards played to them. According to one Child Geek, “This game feels like you are going up and then down a hill, over and over again. Sometimes I can play quickly, and sometimes I feel like I can’t play anything at all.” When the games were over, the Child Geeks were unable to come to a consensus regarding their endorsement. It would appear that their love of the game was totally based on their ability to play the game with the other players. If they had bad cards, they simply couldn’t. As a result, some of the Child Geeks had almost nothing to say that was positive, while others basked in their glorious victories and highly praised the game. 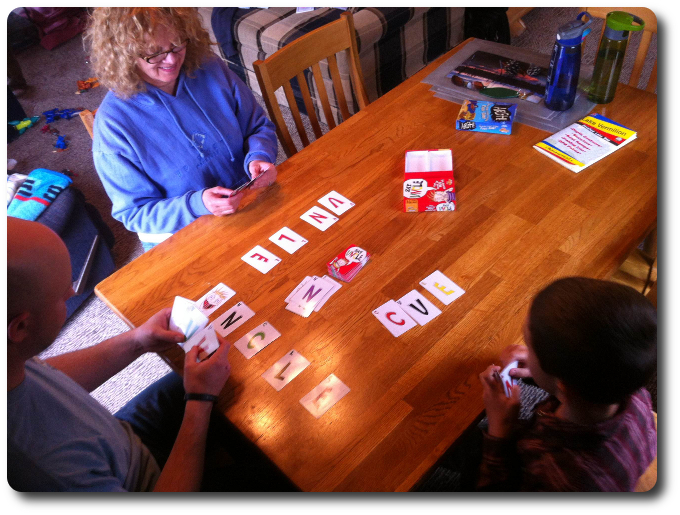 The Parent Geeks enjoyed how easy and casual the game was to play with family and friends, but felt the same level of frustration as their Child Geeks when they were suddenly stuck with cards that couldn’t be played or they couldn’t remove cards in front in them. Unlike the Child Geeks, the Parent Geeks understood why this was happening and adjusted their play accordingly. None of the Parent Geeks felt that the random card draws were overly negative or caused the game to fail. They found the end of the game to be rather unimpressive when only 2 players were left, which most often just resulted in a quick and somewhat one-sided beat down. Overall, however, they found the game to be a good one to play with their family and voted to approve it. At a peer level, Say Uncle failed to impress.

The Gamer Geeks thought the game was a silly one, but did recognize that it required some logical thinking when it came to hand management. But that’s about it. All the Gamer Geeks agreed that the card game was best played with non-gamers, Parent Geeks with Child Geeks, and with the Child Geeks. Never with the Gamer Geeks. Oh, goodness no. The game was rejected by the elitists.

The game does suffer from lack of excitement at times when players are forced to discard and draw new cards. This is especially true when there are only 2 players left and they don’t have the cards necessary to either move, discard, or play a Letter card. When they do, and since there are only 2 players left, it just becomes a punching match where each player exchanges blows. The ending of the game can be a bit anticlimactic as a result. The game also feels a bit longer than necessary for those who are eliminated early, but rarely overstays its welcome. It’s been a hit with our children and continues to be fun to play at our family gaming table.