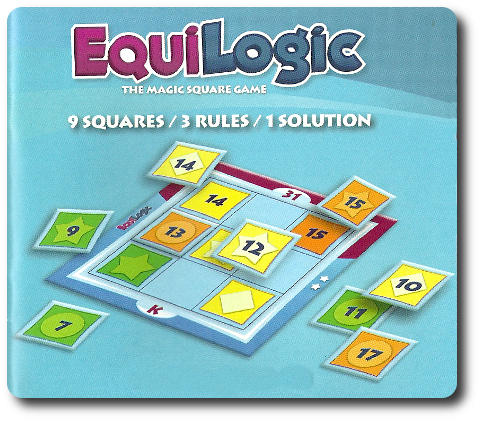 Albert Einstein said, “Do not worry about your difficulties in Mathematics. I can assure you mine are still greater.” Math is hard, and don’t try telling me it isn’t. It’s also wonderful. Thanks to math and mathematicians, we are able to explore our world, our galaxy, and define things we cannot even see. And it all starts with “1 + 1”. In this Puzzle game, logical thinking and simple math is all that’s required, but that doesn’t mean it’s an easy challenge.

Set Up, Play, and Get a Nosebleed

There isn’t much to EquiLogic, to be honest. To set up the game, the player dumps out the Number tiles, organizes them the way they want, and selects a Magic Square puzzle to work on. The Magic Square puzzles have 2 sides. One side (noted with a single star) is supposedly easier than the other side (noted with a double star), but I don’t see it.  This is, after all, just math. And not the complex kind, either. No archaic algorithms or long-winded formulas are used.

Using the above, the puzzle solution is slowly worked out. But, really, the only way you “get this game” is by looking at the solution of the very first puzzle and working the logic backwards. Let’s take that journey together, shall we?

Sometimes the best way to determine how to get from “Point A” to “Point B” is to go backwards. This is especially true for EquiLogic.

As you can see from the image, the puzzle is completed. Each row, column, and diagonal equals the Magic Number “51”. The Magic Center number is “17”, which is 1/3 the value of “51”. All three colors (green, orange, and yellow) only appear once in each row and column. A quick inspection also reveals that each number in the Magic Square puzzle only appears once. According to the rules, the puzzle is solved. 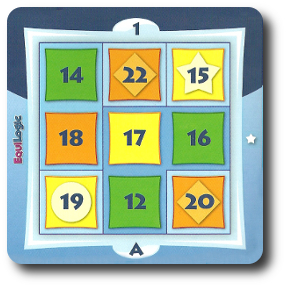 EquiLogic comes with 69 Number tiles that come in “square”, “rectangle” and “L” shapes. Square Number tiles will have symbols in addition to colors and numbers. Symbols include circles, squares, diamonds, and stars. Rectangle and “L” shaped Number tiles do not have any symbols (an important clue when attempting to determine which Number tiles to use to solve the puzzle), but do have the colors. There are no restrictions on the number and types of symbols a Magic Square puzzle can have. They are only used as hints.

A Magic Square puzzle will always show some sort of hint. These hints are meant to provide the puzzle solver a starting point. Hints can be as helpful as number values or Number tile shapes, symbols, and colors. The initial Magic Square puzzle to be solved looks like the following image. 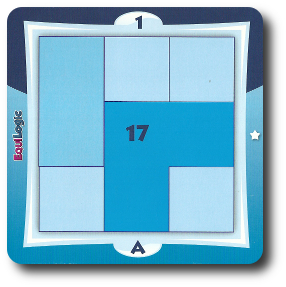 Right off the bat, the puzzle solver knows the following information:

That’s a great deal of information IF the puzzle solver understands the information they have been provided. All that’s needed to go forward is math and logical thinking.

Going Solo or Taking a Friend

To learn more about EquiLogic, visit the game’s web page.

I have a number of players in our three groups that enjoy a good puzzle. Seldom do I hear anyone say they enjoy math. The level of logical thinking required to play EquiLogic isn’t going to be tolerable to anyone other than the most hardcore of puzzle lovers. Add in the math and that list of possible individuals who will enjoy the game is further reduced. Note that the required math in the game is addition, subtraction, division, and multiplication. Using math, the puzzle solver will be able to work through the logic and calculate the solution.

For the Child Geeks, I think we’re are going to see EquiLogic bomb. Interesting puzzles? Certainly! Lots of math? Without question. Put together, I don’t think our Child Geeks will find the Puzzle game to be fun. I’m pretty sure they’ll approach it in the same way they do their homework. Some Child Geeks enjoy the work while others do not. Either way, I think EquiLogic is going to stress-out the Child Geeks.

The Parent Geeks, on the other hand, are going to like what the Puzzle game is all about. It is, after all, very educational. It strengthens logical thinking and math skills. I bet if I put this game in front of some teachers, they’ll very much enjoy what it’s about. From a player’s perspective, the Parent Geeks might not be that excited about it. If EquiLogic is approved by the Parent Geeks, it’s going to be based on the Puzzle game’s use as a tool and means to help their Child Geeks with math. Not necessarily because they think it’s a fun game to play with their family and peers.

The Gamer Geeks normally reject Puzzle games because they can only be played (i.e. “solved”) once and no longer provide a challenge forever afterwards. Gamer Geeks like games where they must use logical thinking, critical analysis, strategy, and tactics to shift and shape the game’s outcome. EquiLogic only uses critical thinking, which isn’t going find much Gamer Geek love.

Teaching EquiLogic is best done as I demonstrated above. Start with the solution and work your way backwards, showing “why” the Number tile was used. The rules never change, but each Magic Square puzzle has a different solution and provided hints. Understanding what the hints are suggesting and where to go from there is all important.

And so, after I introduced and taught EquiLogic to my oldest little geek, I asked him his thoughts on the game so far.

Yeah, he’s not big on math. He is more than capable of doing it and does well, but he always approaches math as a chore instead of a challenge. Let’s play EquiLogic and see if the Puzzle game provides fun or mental fatigue. Possibly both.

A number of the Child Geeks did very well with the puzzles, but none of them enjoyed the “game”. According to one Child Geek, “This is just math and that isn’t much fun.” Another Child Geek said, “I only liked it when I solved the puzzle.” As predicted, none of the Child Geeks voted to approve EquiLogic. They demonstrated some excellent math and logical thinking skills, but not once did I see resounding joy in their eyes or behavior. 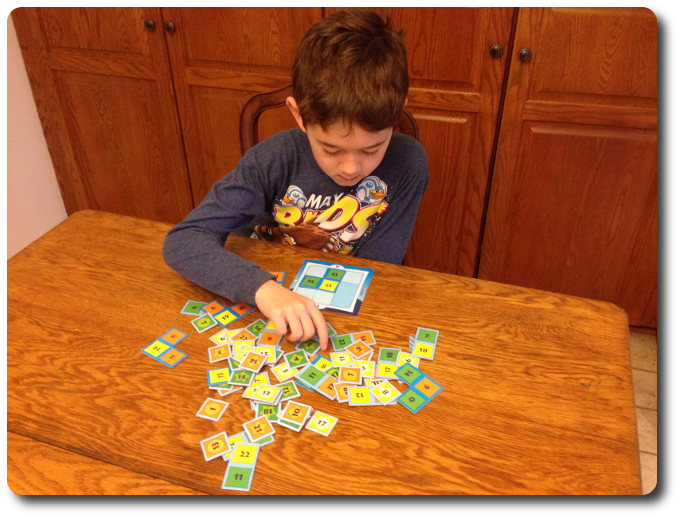 The Gamer Geeks, as predicted, enjoyed the logical thinking necessary to solve the puzzles, but rejected the Puzzle game as something they would welcome at their gaming table. According to one Gamer Geek, “It reminds me of Sudoku, which is fine, but it’s not something I think of as a “game”. It’s a puzzle and nothing more. Not sure where the game part is.” Interesting and challenging, but not something the Gamer Geeks wanted to play or care about.

This is, by far, the most frustrating and rewarding math Puzzle game I have ever played. I have literally SWORN at the game, shouting obscene and highly offensive phrases at it in a vain attempt to persuade the puzzle to become easier or meet me halfway. All for not as math is incapable of being other than logical and precise. No matter how badly I wanted the Magic Center to be the number I thought it should be, it wouldn’t change. There is only ever 1 solution per puzzle. You know when you have solved it incorrectly, but you don’t get many hints that you are walking down the wrong path. Expect to be almost done and then suddenly stuck. The only option is to backtrack, or do what I do, which is swear to the heavens above and start over.

Would I recommend EquiLogic? I have asked myself that very question many times throughout the process of reviewing this game. I would recommend it, but only to those who I know like match puzzles. For anyone else, I would tell them to avoid it. There are many Puzzle games available, and EquiLogic is a good one. Heck, it can be a real brain burner and that’s exactly the kind of thing you want out of your Puzzle game. You don’t want it to be easy. You want to work hard for the puzzle’s solution and enjoy that euphoric feeling of being “awesome” after you do. But, EquiLogic is very “mathy”. As in, it’s all math. This makes it a very specific type of Puzzle game. If you don’t like math, you won’t like EquiLogic. It’s that simple.