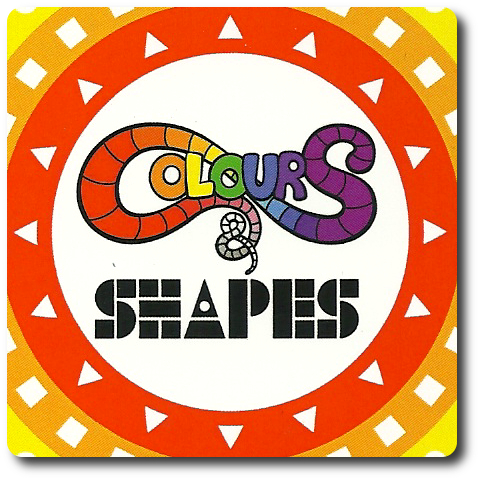 Colours and Shapes, designed by John Posey, III and to be published by Products for Robots, will reportedly be comprised of 4 Character cards, 4 Scorecards, and 90 Game cards. The illustrations by Chris Goodrich are very clean and minimal. As this is a review of a game prototype, I will not comment on the component quality. I do want to note that the current design of the game takes into account that not every gamer sees colors in the same way. Each Game card has the color it represents, has the name of the color, and a shape that is only used for that specific color. Using one or all of these identifiers, those who have difficulty seeing colors, reading, or recognizing shapes can still enjoy the game. Not included with the game, but might be necessary to play, is a pen or pencil and a pad of paper to keep track of players’ scores.

To set up the game, first give each player 1 Scorecard and randomly deal 1 Character card to each player. Any Character or Scorecards not used are returned to the game box.

Second, shuffle the Game cards and deal 7 to each player, face-down. Players should look at their cards, but keep them hidden from their opponents.

Third, place the Game card deck face-down in the middle of the playing area. This is the draw deck for the duration of the game. Leave room next to the deck for a discard pile.

Fourth, determine which game mode will be used. Each game mode is summarized here and defines the game’s victory condition. The one exception is the Team game mode that alters the games rules slightly.

Of course, the 4 different game modes listed above are suggestions only. Players are welcome to create their own game modes, mix and match, and do whatever they like if it makes them happy.

Colours and Shapes is played in turns with no set number of turns per game. A player’s turn is summarized here.

The player draws 1 Game cards and adds it to their hand. If the player is unable to draw a card, the game is over.

The player may now play 1 matching set if they want to or 1 “Black” Game card (described below). This step is always optional, but players are penalized if they have cards in their hand when the game ends.

A match set is 3 or more Game cards of the same color. The number of points a match set is worth is based on the number of cards it contains. Match sets are played out in front of the player. Once played, they cannot be added to by the player or the player’s opponents. The number and type of Game cards in the game are listed here primarily for the benefit of you card counters…you know who you are… 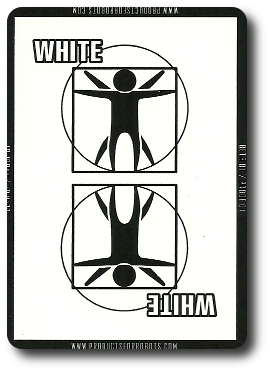 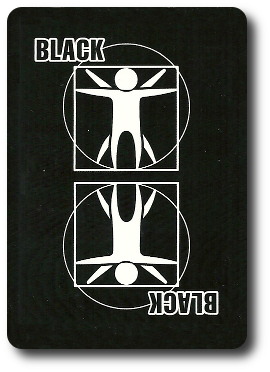 Recall that I said that a played match set could not be added to by the player or the player’s opponents. I said nothing about messing with it. You cannot see it, but I have a smug look on my face right now.

Step 3: Pass and End of Turn

If the player played a match set or a “Black” Game card, their turn is now over.

If the player played their last card in their hand, the game is now over (depending on the game mode).

If the player decided not to play any cards (or couldn’t), they simply state “Pass”.

The next player in turn order sequence now takes their turn starting with step 1 noted above.

Each Character power is summarized here.

If playing in Team game mode, these Character powers are available to both players on the team.

Depending on which game mode was selected during game set up, a winner will be determined after one game or several. Games end when 1 player has no cards left in their hand or cannot draw a card from the draw deck. Regardless of the game mode used, the winner or winners (if playing on a team), are the players who scored the most points or have scored a certain number of points first. 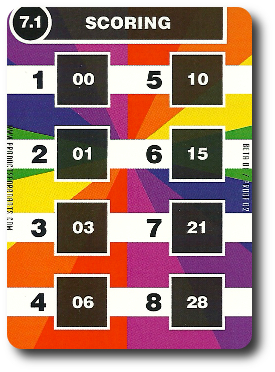 To learn more about Colours and Shapes, visit the Kickstarter campaign.

The Child Geeks understood how to play the game without issue. Colours and Shapes is one of the easier Rummy style games they have played and much of the game’s rules and subtleties were not lost on them. We did have some issues remembering that a match set must contain 3 or more cards and some of the Child Geeks had a problem holding their hand of cards. This is especially true when the Child Geeks kept holding lots of cards in hopes of playing a big match set. According to one Child Geek, “Fun game! I like using my shape power to mess up my opponents!” Another Child Geek said, “The only thing I don’t like about the game is losing.” All of the Child Geeks enjoyed themselves to various degrees and eagerly wanted to play another game when given the opportunity. We attempted to play Colours and Shapes with Child Geeks as young as 5-years-old, but the game wasn’t able to keep their interest. For those who did play the game, they all voted to approve it. 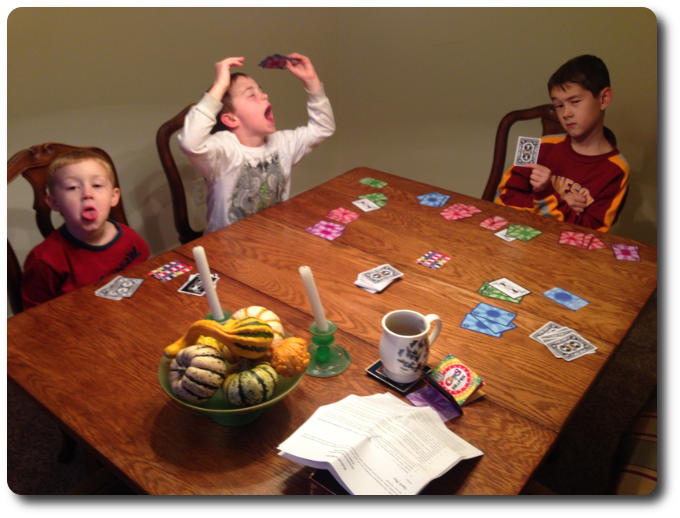 The Parent Geeks also enjoyed themselves. One Parent Geek said, “This game doesn’t look like much, but it sure is fun to play.” Another Parent Geek said, “I think it’s a marvelous game. Easy to learn, easy to play, but it still requires you to think about how you are playing.” Terms like “fast” and “easy” were thrown around a great deal, but not much was said about the Character Powers. When I asked a Parent Geek about their thoughts on the powers they said, “I don’t know. They are fine and can be fun, but the real game is getting your cards on the table as fast as possible, regardless of what color they might be.” When all the games were over, the Parent Geeks voted to approve Colours and Shapes.

The Gamer Geeks were not impressed with this colorful game. According to one Gamer Geek, “This is one of the easiest games I have ever played. I think I just played the last game on autopilot.” Another Gamer Geek said, “This is a great game for kids and families, but I don’t know why any game elitist would want to play a color matching game this easy.” The Gamer Geeks did appreciate the variable Character powers and how they could be used, but they all found the amount of decision making to be exceedingly light and the depth of play fairly shallow. One Gamer Geek took me aside later and said, “I don’t want to rag on the game or the game designer – this is a good game. It’s just not a game I think Gamers are going to enjoy, that’s all.” All the other Gamer Geeks agreed and Colours and Shapes was rejected by the gaming elitists.

To be fair to the game, there are decisions to be made, but to the Gamer Geek’s point, there aren’t many to ponder over. There is no hand-size limit, so players are welcome to hoard cards, but this puts them in jeopardy of having a lot of negative points at the end of the game. Of course, the gamble here is that the player will be able to play a huge match set for some big points. And it’s not like the player isn’t going to see the end of the game coming. The number of cards in the draw deck and the number of cards in the player’s opponents’ hands gives the player a good bit of information regarding when the game will end.

And herein is where I diverge from the Gamer Geeks. I rather like how light the game is. It’s casual game play is coated with a very thin, but potent layer of logical thinking. I won’t go so far as to state Colours and Shapes is full of strategy and tactics, because I don’t think there is much to be had, but players need to think through their decisions. For example, if I were to keep a lot of cards in my hand, I’m putting myself at risk since another player might go out before I do. Or, I could keep my hand filled with as few cards as possible in hopes I go out before my opponent’s score big points, but I won’t score big points either. The number of choices a player has are few, but important, and that was enough to keep the vast majority of players interested and engaged.

As for the Character powers, I could take them or leave them. I personally found the Character power that allowed for another turn to be out of balance with the others. A player can do a lot in a turn. Overall, they were found to be interesting, sometimes bothersome, and oftentimes completed with little fan fair. They did serve as the proverbial “carrot”, so to speak, for our younger players who always tried to trigger their Character power. So, if nothing else, they provide guidance and were only rarely seen as a nuisance.

Overall, a very enjoyable card game. It’s light, has just enough logical thinking to keep you engaged, but will leave any player looking for a deep game disappointed. This is a card game meant to played casually with friends and family at the table. Hardcore gamers should look elsewhere for their game fix. For everyone else, Colours and Shapes is sure to be a good time.