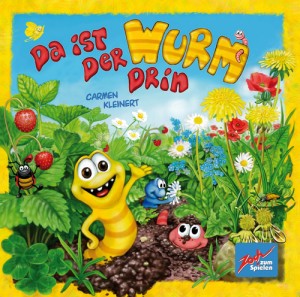 Da ist der Wurm drin (“There’s a Worm Inside”) was published by Zoch Verlag in 2011 and nominated for the Kinderspiel des Jahres. It gives a gentle twist to the standard roll-and-move race game.

The fully-assembled game board consists of three layers of thick card, creating 4 tunnels through which the worms will race. Most of each tunnel is covered, but there are 2 slits at about one-third and two-thirds of the length of the track, to assist in estimating the worms’ progress. The first checkpoint is marked by a daisy patch, the second is marked by a strawberry patch.

Each player picks a worm and pushes its cardboard head into its tunnel. In clockwise order, players take turns to roll a six-sided die on which appear six colors (blue, orange, purple, yellow, green and red). The colors correspond to cardboard worm sections of different lengths, from 1 to 6 centimeters. The player selects a worm section of the same color as his die roll and pushes that into his worm’s tunnel.

Each player also has a daisy marker and a strawberry marker (both are 3 cm long). On his turn, he may also use these to place a bet on which worm will be the first to get to these checkpoints, by simply placing the appropriate marker over the tunnel of the worm he is backing. If he wins the bet, he will push the marker into his tunnel, thus advancing his worm another 3 cm. (If he loses the bet, there is no penalty.)

Not surprisingly, the winner is the one whose worm crosses the finish line first.

I purchased this game, and the other 2 Kindespiel des Jahres nominees, through Amazon.de. I was extremely relieved to find that this German-published game came with multilingual rules including English! I was not expecting to derive much enjoyment from a game pitched at 4 year olds, although at least it seemed to be a mercifully short game.

As my children as used to playing more complex games, I was not sure how much they would enjoy this one. I was interested to see how they would handle the betting, the only discretionary aspect of the game.

As I had predicted, I found this a rather mind-numbing exercise, but not in an unpleasant way. The artwork is very colorful and appealing; my children were very taken with all the components.  The hidden progress of the worms is the saving grace of this game, providing (if nothing else) a topic of conversation as players speculate on which worm is leading and which is most likely to win.

We found in our games a tendency for all players to place the same bet, resulting in no net benefit for any player. While there is no reason to place a bet early, it is important not to wait until the opportunity is lost. If I judged that my worm was considerably behind the others, I would try to place my bet differently to other players, figuring that that would be my best hope of catching up. That strategy has not worked for me yet, by the way, but I do not think my children grasped this concept of “tactical betting”.

My children loved this game and, after their first play, they had no trouble playing it without adult supervision. They also enjoyed playing with it as a toy rather than a game, lining up all the colored worm sections along the length of the dinner table. Although I shall not be suggesting this game very often, I am happy to play it occasionally (after all, it plays quickly) and it is a game that I would encourage them to play with their “non-gamer” friends. 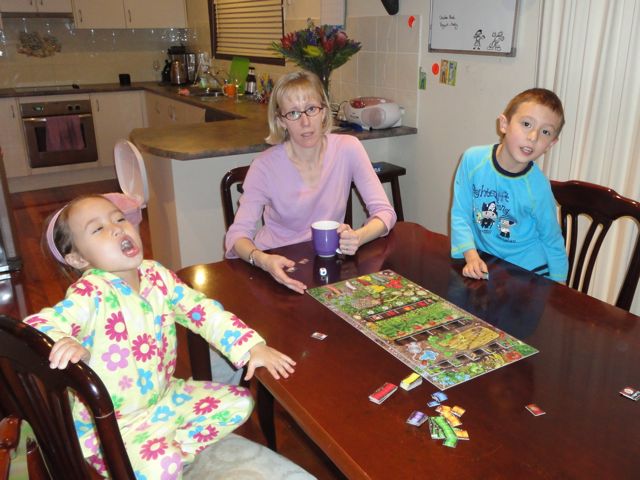 Two players are thrilled, one less so