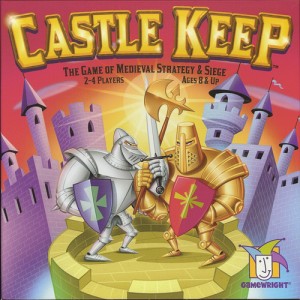 Castle Keep, designed by Richard Reece and published by Gamewright in 2005, is a race to complete construction of your castle, or destruction of someone else’s.

A completed castle consists of 9 tiles placed in a 3×3 grid: 4 towers (the corners), 4 walls (the sides) and 1 keep (the center). The game consists of 90 tiles, including:

Players begin the game with a hand of 4 tiles. In clockwise order, players take turns consisting of:

Instead of building, a player may choose to make a single attack on one opponent by playing a wall tile that matches exactly (in color and shape) one of the walls in the opponent’s castle. That target tile and any contiguous perimeter tiles of the same color are removed. Alternatively, an attack can be made by playing two keep tiles of the same color as the target keep (only one tile is needed to attack if the target keep is the only tile remaining of the castle). Attacks are only possible after every player has built their castle to at least 2 tiles.

I found this game on sale when I was out of town at a convention (no, not a gaming convention, it was work-related). Although I have played many Gamewright titles with my children, and enjoyed quite a few (Forbidden Island being the best so far), I have generally approached these with low expectations. All the better to be pleasantly surprised!

The rules looked simple enough and I was particularly looking forward to a game that my four-and-a-half year old daughter could grasp straight away. My major concern was the potential for one player to be attacked repeatedly by the others, resulting in an unbalanced game. Or, even worse, the opportunity for payback.

“You might have destroyed my castle last game, but I shall have my revenge!”

At our first sitting, we played 6 games in a row; that probably says more about this game than anything else I can tell you. It took a while for us to recognize towers and walls of matching shapes, but once that is done, the game is very simple indeed. My children were excited about the additional artwork on the tiles (such as sheep, firewood, or weapons depicted just outside or just inside the castle, in the style of tiles from Carcassonne).

There is a little strategy involved, but not much. As there is no limit to how many tiles can be constructed in one turn, there is no huge advantage to building any more than necessary to keep your hand size to 4 tiles, unless of course you are about to win the game. Building more just creates a bigger target for other players to attack. On the other hand, a castle that is too small is a target for elimination.

On the subject of attacks, these did not happen as often as I feared. The trouble with attacking a weak player is that you might be setting up the next player for an easy win if he can achieve total annihilation. Strong players might be attacked to reduce their chances of winning through construction. Even then, building a perimeter of mixed colors limits the destruction wreaked by any single attack, a concept that my six year old son picked up very quickly through observing my play.

I was very happy to find a game in which my daughter can compete on an equal footing. I have been guilty of introducing games that are more appropriate for older children, which are accessible to my son but not to my daughter. She enjoys jigsaw puzzles and I believe that this game scratches that same itch, but in a multiplayer setting. 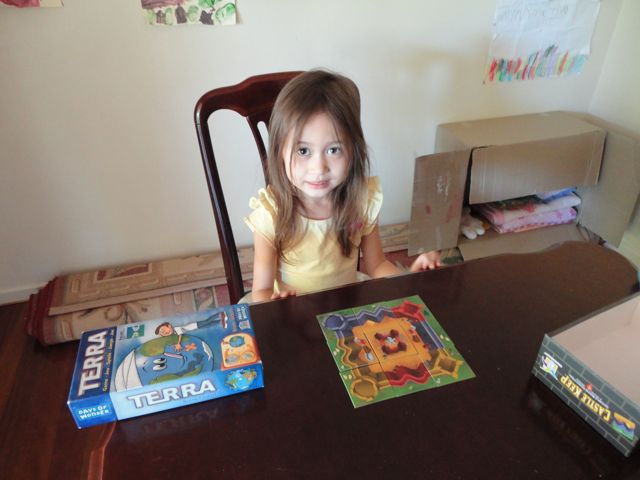