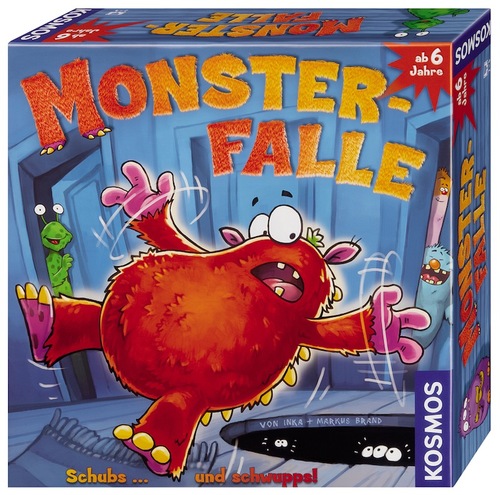 Monster-Falle (“Monster-Trap”), published by Kosmos in 2011, is another Kinderspiel des Jahres nominee.

The game board sits within the box: it consists of a maze with raised walls and two pairs of sliding bars to move the monster horizontally or vertically through the maze. The maze contains 12 empty slots in which are placed monster tokens. There is a central pit (the monster trap) into which the monsters are to be guided. The other components are an orange plastic figure, representing a monster in a sack, 12 monster-eyes tokens (to keep track of how many turns have been played), a 60-second sand timer, and a deck of cards on which are depicted monsters corresponding to the 12 types on the monster tokens.

In a 3 or 4 player game, turns rotate in clockwise order. The active player and the player to his left form a team of two; each will take control of one pair of sliders. The top card of the monster deck is revealed and the monster-in-a-sack figure is placed atop the corresponding monster token in the maze. Then the players call, “Monster, set, go!” and the sand timer is turned over.

The active team uses the sliders to navigate the monster through the maze into the pit. If the monster topples over, it is replaced on its starting space and the navigation begins anew. If the monster is guided successfully to the pit, another card is drawn, the monster-in-a-sack figure is placed atop the corresponding maze token, and again the active team must try to guide the figure to the pit. When the sand-timer runs out, the other players call, “Monster Trap!”, to indicate that the turn has ended. Monster cards from successful trapping are placed in between those two players, representing their tally for the game. A monster-eye token is then tossed into the pit.

The game ends after 12 turns (total, not 12 turns per player). There are two scores to be counted: the team and the individual scores. The winning team is the one that has caught the most monsters. Individual players also add the scores of both teams for which they played. The player with the most points is the individual winner.

There is also a 2-player version in which players play alone, controlling both pairs of sliders simultaneously. Each turn lasts two sand timer cycles and there are only 6 turns in the game.

I ordered this game through Amazon.de and, unfortunately, the postal packaging was grossly inadequate. This resulted in considerable damage to the game box (irrelevant, I know, but it was an extremely disappointing experience and I feel better for sharing). The rules are in German only. I needed 15 minutes with Google Translate in order to understand how to play. If I were more patient, I could have asked our German-speaking nanny to translate them for me instead.

The simplicity of the rules has great appeal. The pairs of sliders bring to mind the energy streams from Ghostbusters’ proton packs. The theme and play of this game sounded very suitable for my 6 year old son, but I was less certain that my 4½ year old daughter would be able to keep up. In particular, I was concerned that any collaboration between the two of them would inevitably lead to the elder child barking instructions at the younger one. I also wondered whether adults would have a distinct advantage over children in the dexterity stakes (this does not hold for all dexterity games. For example, in Gulo Gulo, younger children have a clear advantage over adults).

It took just  a minute for my children to learn how to play the game. After that, the physical and visuospatial challenge of navigating the maze had them enthralled. I was very impressed at their focus on the task and in particular by how well they worked together (my son has a tendency to be bossy when excited).

You might think that the game encourages competition between players, but we found that we were much more interested in  setting a “personal best”. My son and I managed to trap 8 monsters in one minute, and there was much rejoicing. The game keeps all players on the edge of their seats throughout, even those not controlling the sliders. I suggest the players not controlling the sliders should manage the sand timer. This will allow the active players to focus and eliminate downtime for all.

One flaw is that movement of the sliders is not perfectly smooth. We all found this awkward at times, my daughter especially so. I find it hard to imagine, though, that the quality of this mechanism could be much improved without a significant hike in production costs. An alternative would be to use two pairs of chopsticks to move the monster around, but then it would be difficult to enforce the two pairs remaining perpendicular to one another. Despite this, my daughter grasped the visuospatial aspects very quickly. Even if the sliding mechanism had been smoother, I would have considered this appropriate for ages 5 years and up.

The 2-player version is less exciting, lacking the cooperative and communication aspects, but it is still on a par with many excellent children’s games. With 3 or 4 players, the additional dimension of cooperating with your neighbor makes this game a rare gem and one that deserves to win the 2011 Kinderspiel des Jahres. My children have played Monster-Falle 9 times already this weekend (and we’re not done yet), so at the very least it wins the Father Geek award, which is just as good. 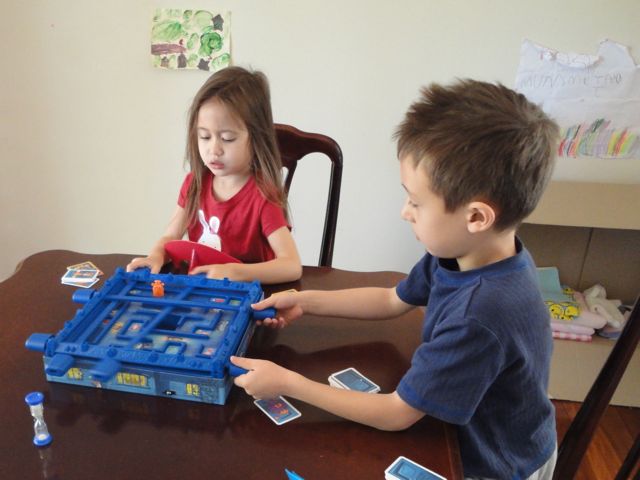 No, they haven’t forgotten to brush their hair, they’re going for that “Egon Spengler” look