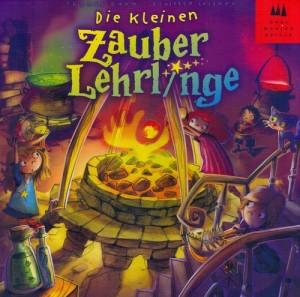 Box art for the first edition

Magician’s Kitchen, published initially in 2010 as Die kleinen Zauber Lehrlinge (“The Little Magician’s Apprentices”) by Drei Magier Spiele, is the third and last of the 2011 Kinderspiel des Jahres nominees subjected to the rigors of a Father Geek review.

As with Monster-Falle, the game board sits within the square box: it has a pit (cauldron) in each corner and a central circular fireplace. Immediately in front of each cauldron, and at four points just in front of the fireplace, are “tipping points” (my term), at which metal located underneath the playing surface will cause the magnet-laden apprentice pieces to tip forward, unloading their cargo. These tipping points are marked clearly with purple stars.

At the beginning of the game, the board is shaken gently so that four mobile metal pieces underneath the playing surface (ball-bearings, perhaps) can be assigned to “random” locations, creating four hidden “tipping points” (representing floor-stones that the apprentices stumble over). There are 16 ingredient marbles in four colors, one orange-swirled fireball marble and 4 wooden pieces bearing pictures of the apprentices, with a slot on top to carry marbles and a rocker-bottom with a magnet at the front.

On their turn, a player places a magic ingredient (red, yellow, blue or green marble) in the slot on top of their apprentice piece. they then uses the magic wand (small wooden ball on the end of a short dowel) to push the piece towards the cauldron whose color matches the ingredient carried. When the wooden apprentice piece reaches the cauldron, the magnet will cause the piece to tip forward, launching the marble towards the cauldron. If it does not land in the cauldron, then the player takes back the marble and will have to try again on a future turn. Either way, the player’s turn is over and play passes clockwise.

After a player has placed all four ingredients correctly, on the following turns they load the apprentice with the fire-ball marble and attempts to land that in the center of the fire-pit. The other players who have yet to finish loading their ingredients are given a chance to catch up: they are permitted to carry two ingredients simultaneously (and will attempt to dump both into a cauldrons matching the color of one of them).

First player to place all four ingredients and the fire-ball marble, wins!

Once again, I was grateful that this game came with rules in 5 languages, including English. I was impressed by the extremely attractive full-color rules booklet. At first blush, though, this seemed to be a very simple basic dexterity game, albeit one with high production values. I was not convinced that the gimmick (the magnetized apprentice pieces) could transform the game into something more substantial.

I underestimated the difficulty of this game. The magnetic tipping of the apprentices catapults the marble forward with considerable force, often causing it to fly well over the target, usually off the edge of the table and onto the floor, much to the amusement of my two children (aged 6 and 4½ years). After some trial and error, we found that we could push our apprentices fairly quickly, once we learned to avoid the hidden tipping points, to about one inch from their destination. Then, a series of very small nudges leads to a much less vigorous tipping and a better chance of the marble landing in the desired location.

Once we had that figured out, the game seemed to me a relatively dull procession in which essentially the same task is attempted again and again. Not that my children found it dull: marbles go flying frequently enough that there are laughs aplenty. All aspects of the game are aesthetically appealing, and I was especially grateful that the box was delivered undamaged, even though the vendor did a lousy job of packing.

Superficially, this game and its fellow Kinderspiel des Jahres nominee, Monster-Falle, might be thought to share the same strengths and weaknesses. Whereas Monster-Falle  forces players to work together and has hardly any down-time, Magician’s Kitchen lacks any real player interaction and can be considered a form of multi-player solitaire. That does not mean that it is a bad game, just that it falls short of being a great game. There is enough meat here for children, but not quite enough to keep adults engaged. In the future, I expect that Magician’s Kitchen will be one of those games that I’ll agree to play, but will rarely suggest. 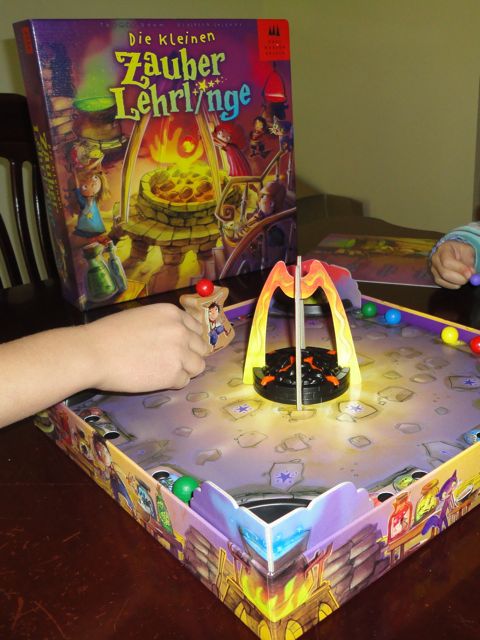