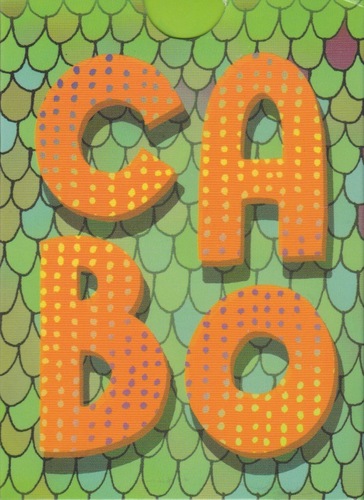 Cabo is a cute little card game that incorporates elements of memory, basic math, and risk taking, but there is also a deeper strategy to the game that the simple, easy to learn game rules would not have you otherwise believe. Players in the game manage a face-down hand of 4 cards to try to reduce their score to as close to zero as possible before another player calls “cabo” to end the round of play.

A round of play takes about 5 minutes to complete and consists of 2 basic actions, of which only one can be taken on the player’s turn:

If a player believes they have fewer points than any other player, they can call “cabo” on their turn. The player must use their entire turn to do so, meaning they cannot draw or swap cards. Once “cabo” is called, all the other players are given one additional turn. Once all the players have had their last turn, the round ends.

This game would be a snoozer if it stopped there, but the designers (Melissa Limes and Mandy Henning) threw in a vital “fun” element. Here is how they did it.

There are 3 types of special cards, referred to as “Choice Cards”, that have a special ability in addition to the number value of the card itself. These choice cards are:

When a player draws a choice card from the face-down draw deck, the special ability can be invoked immediately but at the cost of discarding the special card. All three of the special abilities are intended to inform the player what cards are available and assist the player with the “swap” action. This game element is why the Cabo is both challenging and fun.  Now players have to pay close attention to what the other players are doing and the player interaction, memory, and strategy get taken to a new level.

Another strategy players have at their disposal is the ability to “kill” cards from their hand.  This not only helps to reduce what a player needs to remember, but also will decrease (i.e. improve) their potential score.  To kill a card, the player needs to have a set of 2-, 3-, or 4-of-a-kind matches in their hand. For every match discarded, the player replaces the set with a single card drawn in the normal fashion, regardless of the number of cards in the match.

One final twist to spice things up, a player can try and “shoot the moon”, so to speak. This is called a “Kamikaze” and is achieved if the player ends a round with two 12’s and both 13’s. If the player manages this, all the other players receive 50 points for the round (in addition to whatever points they might receive otherwise) and the player who successfully Kamikazed is awarded zero points for the round.

At the end of the round, points are accumulated and added to the previous score. The game continues with a new round until a player exceeds 100 points in total. There is a last ditch effort where if the player scores 100 points exactly, they can reset their total score to 50. In the end, the winner of the game is the player with the least amount of points.

This game is a lot of family fun. One of those hidden gems I would have never known about if I did not attand Origins 2011. What is not apparent is that even my 4 year old has fun playing the game, although he lacks the strategic prowess to ever really do well. The mechanics of the game are simple enough that he can draw a card and recognize if it’s a choice card or not to perform the special action.  He also understands the rules well enough to swap out one of his cards, although it’s somewhat arbitrary. Because the basic actions are simple to do, he has a blast playing it. In addition, he has the attention span to follow along because each round is so short.

I do modify the game a bit when playing with younger kids. There is no real need to keep score; just play a few rounds until everybody wants to move on. I had to make a rule that he is not allowed to call “cabo” until he has made at least 4 card draws, which I loosely track for him.

The game is great for teaching early math and counting skills. Cabo provides me with a perfect opportunity to teach my son basic addition as we add the numbers of his cards together.

I do not have girls, but I wonder how they would take to the artwork. The card art is beautifully hand drawn, but is clearly “girly”. I suspect girls would be attracted to it like ants to pie. I find the card art cute, although my boys don’t seem to care about it at all.

Another huge bonus to the game is that it passed the mother-in-law test over the 4th of July holiday weekend. My mother-in-law only likes quick word games, has the gaming attention span of my 4 year old boy, and will completely glaze over if game explanations take more than 2 sentences. Even in this basic game, I did get a bit of this, but once we played a few rounds, she immediately asked for more. For the first time ever in my 7 years of marriage, she actually asked me to bring over one of my games when we came for dinner. Wowzers!!

My only criticism of Cabo is one easily remedied. I do not like the aspect of the game where if you hit 100 points you can reset your score to 50. It can put a random time extension onto a game that just doesn’t need it. It is just more fun to start another game rather than dragging out the current one.  There are official alternate game rules available  that state you can modify this rule to reset to a different number.  I would favor either not playing with this rule or resetting the player’s score to something like 95.

I thoroughly enjoy playing this family-oriented game. It is easy to explain, fun to play, and yet rewards those that concentrate on what is going on. It has a depth of strategy that is not immediately apparent and offers much replay-ability. I can envision this appealing to a very wide audience and is currently only held back by word-of-mouth. For this reason, Cabo can be difficult to acquire. Lucky for you, if you head over to the official game web site, PlayCabo.com,  you can purchase a deck for yourself.

This game was given to Father Geek as a review copy. Father Geek was not paid, bribed, wined, dined, or threatened in vain hopes of influencing this review. Such is the statuesque and legendary integrity of Father Geek. Father Geek receives no additional endorsements or payment as a result of product sales.