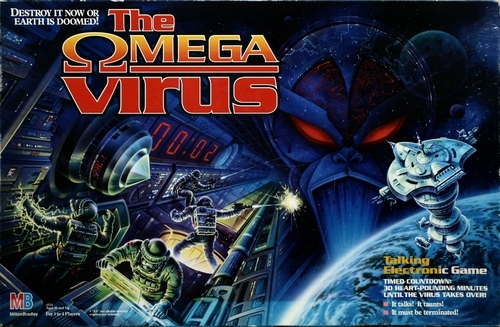 I won this game in a giveaway on Board Game Geek. I had never heard of it before, but the name intrigued me. On a whim, I entered and won it. Serendipity, I owe you one!

Published by Milton Bradley in 1992, and sadly out of print for the foreseeable future, The Omega Virus is a paragon of board game production value. The plastic throughout is sturdy and the art is vibrant. The rulebook is very clear and well-written, and the first few pages are a comic book that explains the back story. The figures that you move around the board are two-inch tall action figures called “commandos” that have backpacks on which you clip sculpted plastic pieces of equipment.

The game board itself is huge. When it’s all expanded, it measures about 4 feet across. The outer edges are player boards and rule references that have slots to hold the different access cards you can acquire. The inner square of the game board is the space station itself, with rooms and corridors of specific colors, all brightly colored and easily distinguished. The artwork on the game board conveys the atmosphere sufficiently.

But the crown of the game is the Command Center: a plastic housing case that contains the computer that runs the game, as well as slots for holding all those extra pieces that you don’t need right away. The computer has 4 buttons, labeled 0, 1, 2, and R, and it is a very mean computer.

The goal of the game is to eliminate the Omega Virus by collecting 3 anti-virus devices, finding the virus, and then defeating it in battle. The players have to do this before the time runs out. The time limit is set at the beginning of the game based on the number of players and the skill level the players choose. The game is competitive. Only one player can defeat the virus, but if no player manages to do that before the time runs out, everybody loses.

Turns are fairly straightforward. A player moves their commando to a room, enters that room’s code in the computer, and listens to what happens. A player might find one of the anti-virus devices, or their probe (a robotic buddy that can search rooms like the player can), an access card (allowing the player to enter other parts of the space station), or a trap. All players have a little clue sheet to keep track of what they find in each room. Use it, because if the player should ever lose something, they can go back to the same room to reclaim it.

If the player wants, they can attack other commandos or their opponent’s probes in an attempt to slow the other player down or steal one of their anti-virus devices. The computer gives the players the result of each attack.

Finding the Omega Virus is where the deduction comes into play. At the start of the game, each player gives the computer a secret two digit code. After the player explores a room on their turn, the computer announces two numbers. If those numbers are the player’s code, they know the virus is there. The code is only valid on the player’s turn. If another player hears their code on another player’s turn, it is ignored.

I really enjoy this game, and my kids do, too. The computer’s voice drives the game and mocks you as it does so. It tells you what you find in the different rooms (some of them are trapped), runs combat (you push buttons to choose your target), announces the time remaining, and even starts shutting down sections of the space station toward the end of the game. When a section is shut down, you mark it by folding the player board for that edge inward, over the board itself. The folded over board hooks in to the Command Center and provides a physical reminder that the section is closed off forever.

The ending is usually tight and variable game difficulty levels ensure that it will continue to be so. There is a good deal of randomness in the combat and searching of rooms, but in a 30-minute game, that’s no big deal.

The only thing that can mess things up a little is when you accidentally push the wrong buttons on the computer. In some cases, you can “undo” your mistake, but in others, you just have to keep going. This could break the game a little, by letting you explore a room you aren’t in or attack somebody you didn’t mean to, but it usually isn’t a big deal.

Younger children can play this game with some coaching, and we usually play fully-cooperative in that case. The game is a little more difficult that way because we don’t allow ourselves to attack another commando that has something we need, but it’s still possible to win.