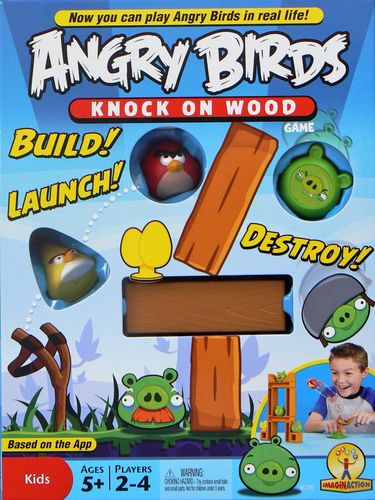 Much like the video game, Angry Birds: Knock on Wood requires player to launch their “birds” at various structures consisting of plastic blocks, pig figures, and bonus items to earn points. The first player to 1000 points wins the game. 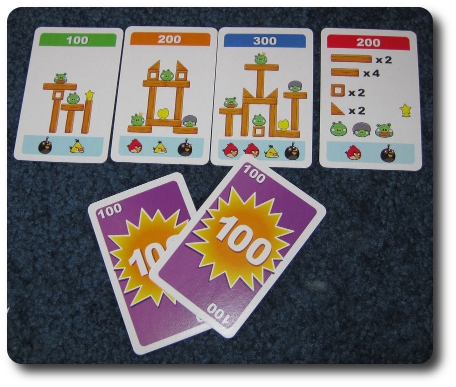 After a player chooses the mission card, the structure is built by an opposing player. This can be a problem if adults are playing with kids under five years of age. My 4.8 (yes, I wrote 4.8) year-old daughter had little trouble with level 1 mission structures, but there was some problems with level 2 and 3 structures. The main problem I saw was that my daughter did not quite understand the concept of balance and counterbalance. The picture of the level 3 mission card below is a prime example of how parts need to be built in certain order to stabilize the structure before more can be added. At first, my daughter tried to add the king pig before placing the “T” structure. This obviously caused it to fall and became the source of frustration, but this also presented a good opportunity for me to teach the concept of counterbalance. She understood it somewhat, but after some other accidents related more toward dexterity or agility, she asked me to finish it which was fine. There were some incidents where I did see her adjusting the blocks in order to stabilize it, so some knowledge was gained, and I only expect her to get better as we play it more. 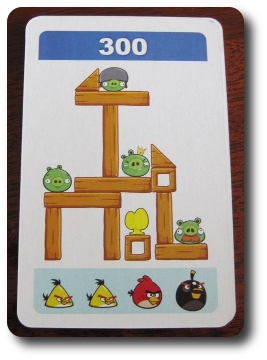 After the structure has been built, the player who selected the mission card gathers the various birds shown and begins to launch them at the structure. If the player knocks all the pigs down using all or some of the allotted birds, they get the card and corresponding points. If there was a bonus item that was also knocked down, they take that as well, provided all the pigs were also knocked down. No points are awarded for knocking down the “wood” pieces. 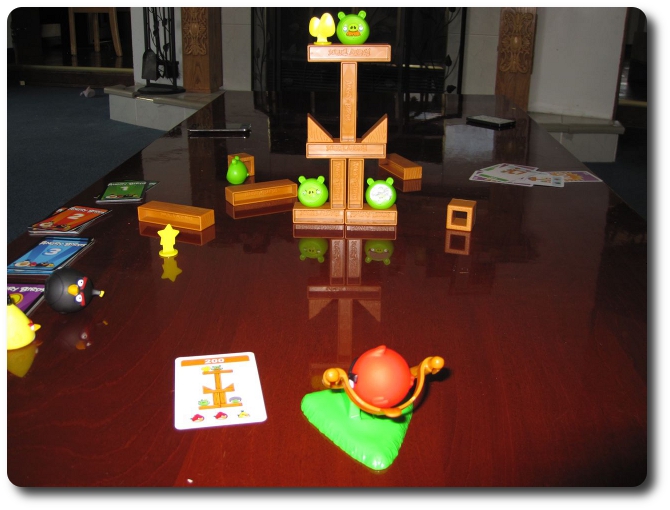 The game can play quickly or drag depending on how good the players are. In our initial games, we went several rounds without someone knocking the structure down. In this case, I gave my little geeks some extra shots. After awhile of getting used to the launcher, they improved.

The necessary playing surface for this game requires about 2.5 feet, as the minimum distance to take a shot is 1 foot. The bird launcher did not have a problem with distance. I recommend the game be played on a hard, level surface in order to build a stable structure.

All game components are of excellent quality and look great. The pigs and “wood” pieces are made of hard, sturdy plastic. The “birds” are made like a rubber duck or a dog’s chew toy (note to pet owners and children who are teething, your dog/child might take a liking to them). The birds that come with the game are the small red one, pointy yellow one, and the black bomb bird. Unfortunately, weight is the only difference among them. No explosions are caused with the bomb bird.

I originally purchased this game for my wife as she is a huge Angry Birds video game fan on our iOS devices. Like the video game, this board game adaption is very much a solitaire experience and there is minimal interaction among the players. Does this qualify the game as a Euro-game?

My kids were well acquainted with Angry Birds and I knew some level of fun would be had by all. Surprisingly, the game is much deeper than most kids games because the game provides options that carry risk along with it. That said, the game is still simple enough that a three year-old could play with supervision. Little geeks at the younger end of the age spectrum will likely need to be given more opportunities to fling the birds or frustration might ensue and the fun will end quickly. But don’t expect the game to be a piece of cake for adults. I’ve played about five games and I have not yet mastered the slingshot. Having different weights for the birds increases the challenge.

I don’t recommend this game be played with more than two players due to the amount of downtime necessary to build the mission structures. This downtime quickly results in bored little geeks. Lack of player interaction could be another contributing “bore” factor, too. I have not yet completed a two-player game with my 4.8 year-old because, after 20 minutes of play, she wanted to do something else. My 7 year-old has played a bit, but prefers other games instead. Regardless, 20 minutes of fun with my little geeks, completed game or no, is time well spent. 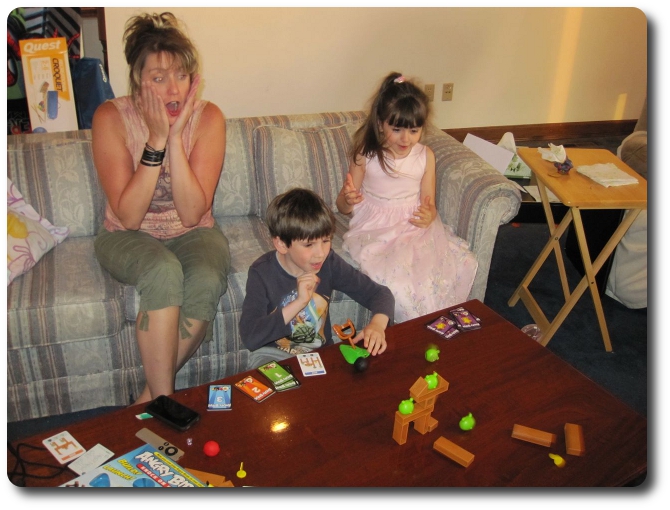 The designers of the Angry Birds: Knock on Wood game have created a fun translation from the video game and kept the theme intact. The components are well made for the age group and it has provided a decent level of fun for my family. I recommend this to anyone with little geeks who are also familiar with the video game or are looking for a worthwhile action/dexterity game.