Unless you have not been paying attention, you know very well by now that Father Geek is all about sharing our geeky passions with our children. We have also said, time and time again, that it is never too early to start doing so. Be it playing with Transformers on the ground, reading comic books on the sofa, looking at pictures of dinosaurs in the backyard, or building with LEGOs at the kitchen table, you can begin these activities with your children almost immediately. Granted, you won’t get much in the way of cooperative play with the very youngest of your little geeks (the last time we checked, newborn children just kind of loafed around the house), but that doesn’t mean they are not watching, learning, and enjoying your company. Interaction is everything.

Case in point, my recent visit to see my family in Washington. My little niece, younger than 5 months old when the below photo was taken, was right there in the game playing action with us. Yes, she couldn’t talk, hold her head up for long, or understand the complexities of strategy vs. tactics, but that didn’t slow her or her dad down. My brother brought his little daughter to the table and she was as much a part of the experience as any other player. 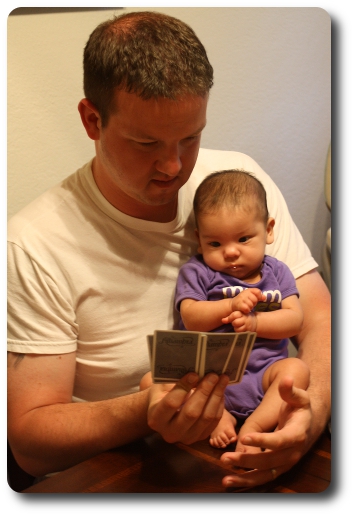 Dad and Daughter devise their strategy...

The game being played here is Alhambra. It has very colorful game components and interesting designs. My niece’s young mind was drawn to the colorful cards like a moth to an out of control chemical fire. When my brother moved the cards, her eyes and head moved to follow. When my brother made a move, he’d whisper what he was doing to his daughter, talk to her, play with her, and cuddle her. He did all this while playing games (which he loves), being a loving and engaging father at the same time. Sadly, he didn’t win the game, but that’s because he’s really not very good at it (a statement my brother will most likely dispute, *snicker*). At being a father, however, he’s one of the best.

Throughout the entire game, not once was my brother’s parental involvement with his daughter a distraction. It could be argued that my brother was setting the bedrock for more complex game theories in her mind. The most basic of geek skills were being shared and a positive experience was had by everyone at the table.

The world has another little geek in the making and I couldn’t be more proud or excited. What you see here is the first of many wonderful father/daughter moments.