Trash-Talk 101 for Your Little Geeks 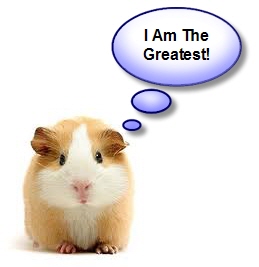 Before I play games with my little geeks, I like to go through my Father Geek checklist.

What was the last game you played with your little geek? Did they win or did they loose?  Regardless of the outcome, do you believe that the game strengthened your little geek’s  emotional coping skills? Did the game have high and low points and offer excitement and fun or was the game just an exercise in game mechanics? Could something else be added to the game experience to spice it up and take emotional coping skills to the next level?

Your game experience with your little geeks could benefit from adding some “personality” to it. This is especially true if the game you are playing involves player interaction and each player can influence their opponent’s game experience, either directly or indirectly. For example, The game Space Hulk is just a miniature combat tactics game, but let’s add some “personality” to it. What are those Genestealers or Space Marines thinking about or yelling to their enemies? These are the questions I ask my little geeks after the game mechanics are understood and it adds a good deal more to their experience.

But “thinking” about what is going on in the board, theme and narrative wise, is only the beginning. I encourage my little geeks to trash-talk at the table, too.

Hold on a minute, everyone. Be advised, when I say “trash-talk”, I do not mean it to be used in a way that puts down your child, promotes swearing, or poor sportsmanship. After all, we are still trying to have fun and create great memories for us and our little geeks. But I argue that adding a small level of boastfulness for a great move or  a little teasing during a competitive game can make victories all the sweeter, the game play more visceral, and allow our children to have some fun with the game pieces, as well. In my own home, we never use trash-talk to put down each other. Rather, we use trash-talk to animate the characters on the board and add color to the game play.

“Trash-talk” is a fun way to help add personality to a game and strengthen a player’s emotional coping skills. A great example is Survive! Escape from Atlantis. This game has been a real hit with my kids, and I am excited that even my four year-old daughter can play it. The game has excellent and sturdy components, so I am not worried about the game taking damaged (within reason). Furthermore, players can have an effect on each other and the game is dripping with theme. While the game is fun to play in itself, there is still room for more fun and teaching my kids that it’s OK to tease in a light-hearted manner, as long as they understand that it may be done back to them. Additionally, I think encouraging them to act out their game play with the board pieces instills some additional confidence in their moves and introduces the concept of confrontation at a low level.

Keep in mind that this is a sensitive area and should be introduced only if you believe your little geek can handle some good natured teasing. I have to say, my four-year old daughter handles our trash-talk teasing within a game much better than my six-year old son. She is less competitive. She even pointed out to me in a recent game of Survive! Escape from Atlantis, that she was keeping the boat at shore for me so one of my guys could come aboard! That said, she was all to happy to move a sea monster to destroy her older brother’s boat containing two people.

The level of “trash-talk” has to be raised gradually, and our little geeks need to be reminded on occasion that we are just having some fun with the pieces and are not attacking them personally. When our children have an opportunity to take out one our pieces, we should let them know the option is there to trash-talk to the parent if they do not recognize it. The trash-talk need not be words, but sounds. When a sea monster attacks, have them shout, “CHOMP!” Explore what other sounds the game pieces can make and ask your little geeks what sort of sounds transpire from attacks. Chances are, they will greatly oblige and laugh, growl, chomp, crunch, and gurgle for the entire game.

In summary, the whole idea behind “trash-talk” with your little geeks is to add some additional theme and personality to games that might otherwise be just another exercise in logic, counting, or tactics. It’s not about putting your child down, it’s about adding additional fun to the game that might even help disguise the fact that they are gaining mental and emotional skills in the process. The act of taking on the role of various pieces in the game urges them to be more vocal – and might add confidence behind their choices throughout the game, too. Your mileage will vary with this additional facet to gaming and so it should be added gradually over time. Your little geeks are in a safe environment to learn advanced emotional coping skills that may result from the low level of “trash-talk” described in this article.

Games are about having fun but are also meant to be challenging. Don’t be afraid to add a little “trash-talk” to your next gaming session with your kids. Over time, you may see developmental rewards from your little geeks and having fun while doing it.

2 Responses to Trash-Talk 101 for Your Little Geeks