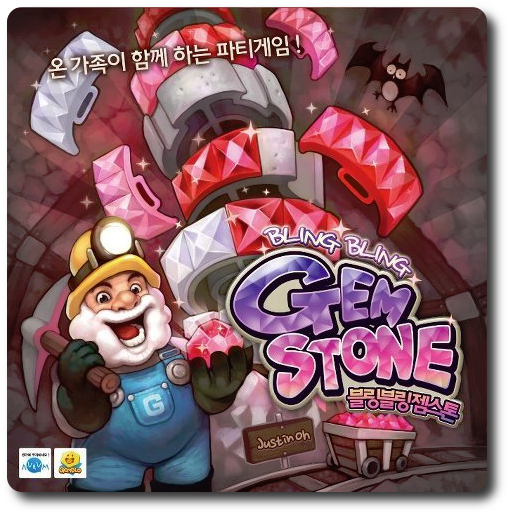 It might be cold, dark, and dangerous in the mines, but that’s where the wealth is. Gemstones the size of your HEAD can be found below ground. It’s easy enough to find them, but the trick is tapping them out of the stone. The mine is unstable and the rock is very fragile. If you want to “strike it rich”, you need to strike softly. Hit too hard, and you’ll be covered in worthless rock.

Bling Bling Gemstone, designed by Justin Oh and published by Mayday Games, is comprised of 9 Stone Pillar pieces, 36 Gemstones (in the colors white, pink, and red), 1 Foundation, and 1 Gemstone Pickax. Every component in this game is made of solid plastic. The Gemstones range from clear (the white pieces) to almost completely opaque (the red pieces). The Pickax is light enough for small hands, but has enough weight to it so individuals will need to put some control into their swing. Overall, a solid quality product.

Note: If you have played Click Clack Lumberjack and didn’t like it, you can stop reading this review now. Seriously. Bling Bling Gemstone is the same game with different scoring rules, theme, and slightly different components. I suggest you just skip to the scoring and the Game Variants section if you liked Click Clack Lumberjack. You might find the differences intriguing. For everyone else, you MUST read the full review. No, not really.

Down Into the Mines

Second, have everyone grab a Stone Pillar piece and randomly slide in 4 Gemstone pieces. If players wanted to make a pillar all one color, they certainly may, but it’s more fun if it’s not. Gemstones slide into the Gemstone Pillar pieces using a simple system of tabs and slots. Once a Gemstone Pillar has 4 Gemstones on it, place the piece on top of the Foundation, stacking each subsequent piece to form a single pillar. 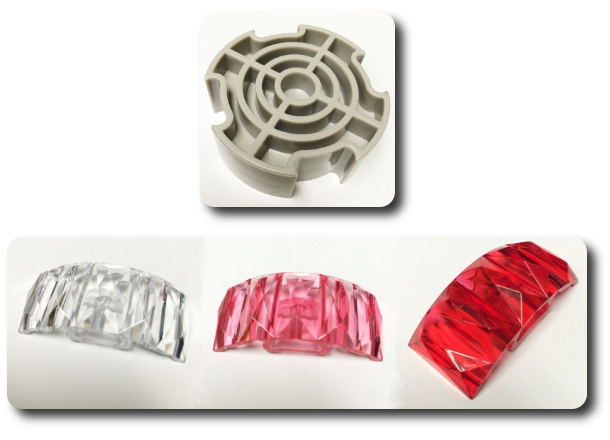 Example of Stone Pillar piece and the 3 different colored Gemstones

Third, determine who will go first and pass them the Pickax. When completed, you should have a very garish looking Gemstone Pillar with so much bling it’ll make your mind hurt. 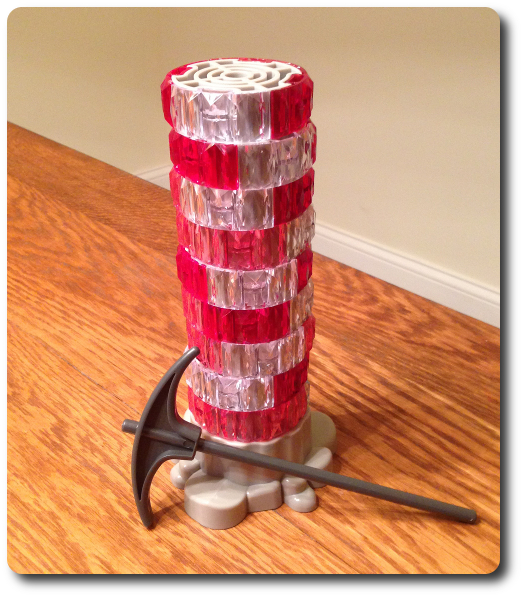 That’s it for game set up. Time to go mining!

It’s All About the Bling-Bling

Bling Bling Gemstone is played in turns with no set number of turns per game. Each turn, starting with the first player, is summarized here.

If any pieces fall or are violently whacked off (play with a 5-year-old and you’ll know what I mean), the player now collects them, both Stone Pillar and Gemstone pieces, placing the pieces to one side so they do not get in the player’s way during their next turn.

This completes the player’s turn. They pass the Pickax to the next player in turn order sequence and the game continues.

The game ends as soon as the last Gemstone is collected. Players now count the number of points they earned and lost.

Several game variants are provided in the rules that are pretty entertaining to play with. Give them a try.

If a player does not collect at least 1 Gemstone on their turn, they take 1 Gemstone they previously collected and place it in a bonus pool. This Gemstone and any others that are in the bonus pool can be won by the next player who collects 1 or more Gemstones on their turn.

If the skill set between players is significant enough to suggest that one player will have a gross advantage over another, you can handicap the “expert player”. And I use the term “expert” loosely here. The expert is restricted to only collecting the “Pink” and “White” Gemstones, leaving the “Red” Gemstones (that are worth the most points) to the novice and inexperienced players.

Each player selects 1 of the 3 Gemstone colors as “their color”. All Gemstones of this color earn the player +2 points. Any other Gemstone colors are worth -1 point. Stone Pillars are still worth -10 points. In a 6-player game, 2 players will be working on the same color!

Once again, the Child Geeks made the crazy claim that this was (and again, I must quote), “THE GREATEST GAME EVER!” I really need to take some of these Child Geeks aside and explain to them what they are suggesting. Until then, the Child Geeks found Bling Bling Gemstone to be a highly entertaining and incredibly frustrating game. They laughed, they screamed, they giggled, and they sighed. The game brought out a lot of emotions and each turn with the Pickax was carried out with careful precision or with a reckless devil-may-care attitude that sent plastic everywhere. Either way, the Child Geeks liked it. According to one Child Geek, “What I like most about this game is how each swing with the pickax feels so important!” Another Child Geek said, “I like playing it, but I like watching my opponents play it even more.” Pretty sure he was referring to how badly things can go for players when swinging the Pickax. If such is the case, yes, it’s always more fun to watch the misfortune of others in a dexterity game rather than experiencing them. Not sure if there is a positive lesson here. When All the games were over, the Child Geeks voted to approve Bling Bling Gemstone. 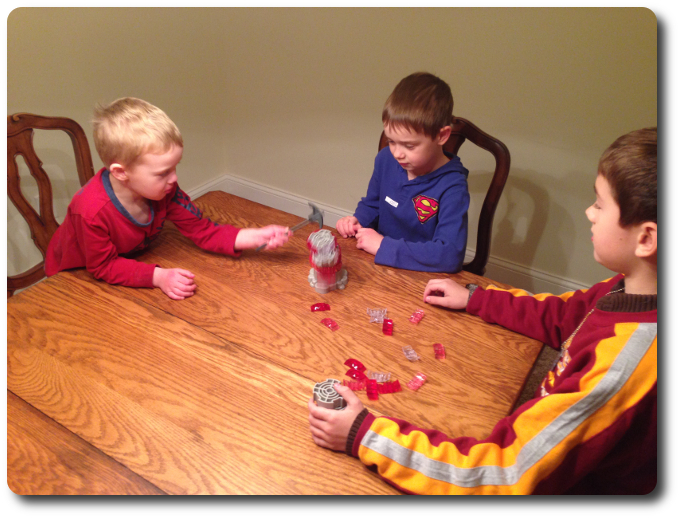 My 5-year-old’s strategy was this: TAKE EVERYTHING!

The Parent Geeks liked the game. Not nearly as much as their Child Geek counterparts, but their enthusiasm for it was still visible. They liked the different game variants and how the colors could be used to create difficulty. According to one Parent Geek, “I like this game version better. I’m not striking blindly. I know what I want and I can see how to get it.” Actually getting it is the trick, however. All the Parent Geeks struggled to find that “sweet spot” that would help them collect the most Gemstones. They never found it, but several Parent Geeks were more proficient than others. One Parent Geek, after a particularly successful tap, said “I like dexterity games. It lets you think about things differently than a board game and the rules are always simple. I’d play this game again without question.” When all the games were over, the Parent Geeks voted to approve the Bling Bling Gemstone.

The Gamer Geeks were mixed when it came time to approve Bling Bling Gemstone. Some of the Gamer Geeks found the game to be cheesy but an enjoyable distraction, perfect for casual game playing before or after more difficult games. Other Gamer Geeks found the game to be a “family game” or a “children’s game” and didn’t think any Gamer Geek would really enjoy it. One aspect of the game they all agreed upon was it was an improvement to Click Clack Lumberjack. According to one rather vocal Gamer Geek, “This is a better game for two reasons. First, the scoring. You no longer have luck determining how many points you collect. Skill now plays a very significant part. Second, with different colored pieces, you can easily create some interesting game variants. Still not a true Gamer Geek’s game, but it’s getting closer.” Some Gamer Geeks welcomed Bling Bling Gemstone at their table, while others didn’t. The end result was a mixed bag from the gaming elitists.

Well, shoot. The Gamer Geek took most of my thunder. This is, indeed, a better game than Click Clack Lumberjack. Visually, it’s more interesting and color tends to please the eye. Scoring wise, it makes more sense with the colored Gemstones and allows players to make decisions that matter before swinging the Pickax. I also like the game variants that are included. Other than the handicap suggestion, the game variants all bring something slightly different to the base game that is entertaining.

Now, admittedly, this game might be something of a money grab. This is, after all, a strikingly similar game from the same company and game designer that brought us Click Clack Lumberjack. The mascot in front of the game is even the same. For many, the response is going to be “so what?”, which is perfectly reasonable. For others, they might feel a little bit kicked and emotional about it. As for me, I’m all kinds of over Click Clack Lumberjack. Bling Bling Gemstone is a superior game. albeit the SAME GAME with a slightly better rule set. Not much difference here, but what differences there are is enough to tip the scales in Bling Bling Gemstone’s favor.

If you are looking for an entertaining, frustrating, exhilarating, and rage inducing dexterity game that can be played by your youngest player to your oldest, do look into Bling Bling Gemstone. I guarantee it’ll make you swear under your breath and pump your fists into the air. If you can get your grandma to do either, HOW CRAZY AWESOME WOULD THAT BE?!?!