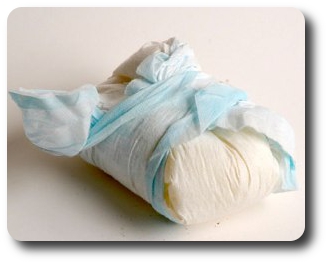 I hate, hate, hate the smell of dirty diapers. This is especially true after my children enjoy a second helping of Burritos at supper time.

My wife and Parenting Battle Buddy has a very weak sense of smell. She has to put her nose very close to my children’s posterior to determine if the little guy is soaking in his own juices. The same could not be said for me. I can smell a fresh dirty diaper 20 feet away, upwind, raging with a legendary head cold.

This almost superhuman power of smell I posses only appears to work when I am around things that really gross me out. Trash, skunks, feed lots, and anything else you can imagine that smells bad makes me gag. This does not make me any less of a man and I will vehemently defend this point as I pinch my nose tightly and debate you ad nauseam.

With three little geeks, I have had to endure diapers on three separate occasions. Thankfully, my two oldest have graduated to underwear and have left their days of self-contained poop packages behind them (pun intended). My youngest is still sportin’ the Huggies like a Boss, however, and fills them several times a day. For reasons beyond comprehension, his diaper deposits seem to be the worst of the three. It’s almost as if he has decided to out do his older brothers in some strange and terrible diaper filling contest. A contest, I might add, he is winning without question.

A Febreze of Fresh Air

Our changing table setup is very much like a surgeon’s operating room. Diapers and wipes are set to one side and easily accessible to the parent with very little effort making diaper changes efficient and quick. To date, I can change a dirty diaper in 30 seconds; my wife can complete a change in 20. That’s good enough for NASCAR, if instead of wheels the cars ran on four diapers.

Since everything is done at the changing table, it stands to reason that the room the changing table is in is also the smelliest. We have used diaper disposal systems in the past and they do keep the odor contained, but after so many hundreds of diapers, whatever odor blocking shield that might have existed has long since disappeared. Since we are on our last leg of our amazingly gross diaper journey, my wife and I will not be investing in a new diaper container and just use what we have. To combat the smell, we’ve been using air fresheners and open windows to neutralize or reduce odor in the room. To date, we have been fairly successful but we are always on the lookout for better alternatives.

When I was approached by Dad Central Consulting to try out Febreze’s new Set & Fresh air freshener, I was happy to do so. As winter approaches in Southern Minnesota, opening a window is becoming a less and less viable option for odor elimination.

The Set & Fresh model is plug free and does not require any batteries to use. This is very useful as we have blocked all of our plugins for safety reasons for the kids, and speaking of kids, having a house with three little geeks means that there is not one single battery that is not accounted for and powering some toy or remote. Therefore, having something so low tech that doesn’t require a power source was an immediate benefit. Best of all, since the air freshener is free from plugs, you can place it anywhere in the house. For example, on high shelves where little hands and curious minds cannot reach it.

The air freshener comes with a stand that is very low profile and the fragrance oil package slides in very easily. There is nothing to cut or puncture. Just slip it in and it starts to work within minutes. You’ll notice the air freshener much faster in smaller rooms but I wouldn’t use it for anything larger than a medium-sized room. In fact, the same suggestion is printed on the back of the product. Looks like great minds really do think alike! Or, at least, my mind and one of Febreze’s marketing gurus.

Design wise, the air freshener is very simple looking. Almost minimalistic in its design. I wouldn’t go so far as to say “blah”, but there certainly isn’t much to it. Not a bad thing when you consider you do not want to draw the eye to an air freshener. The product was meant to please the nose, not the eyes. Besides, it would make a horrible conversation piece at your next dinner party. 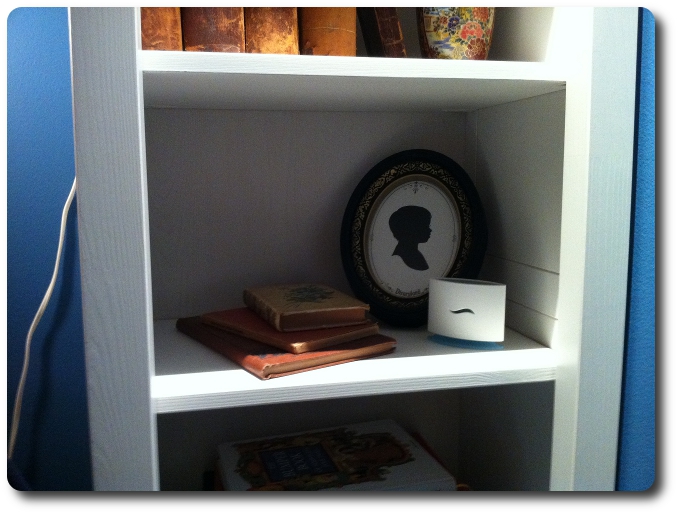 The design is fairly simple which will make it look less out of place on your shelves. Here's a hint: it's that white thing in the corner. Kind of like playing "Where's Waldo's Air Freshener", eh?

The air freshener did the trick and its job without issue. The fragrance oil I received, “Linen & Sky”, was a nice change from the stinky alternative that was usually wafting in the room. Personally, I would prefer a scent that is a bit more strong as I don’t want to be caught by surprise by walking into a stinky pocket of bad air. Yes, in the war on diapers, it is always better to overkill.

As far as air fresheners go, there is nothing particularly exciting to report here. Yes, it works and works as well as you’d expect. There are several different fragrance oils to choose from and I’ll be looking to get different ones in the future. Like I said, I want a stronger fragrance as “Linen & Sky” is just a bit too soft for me. I can smell it, but it doesn’t really mask the odor of stinky diapers.

On a whim, we moved the air freshener to our bathroom off the main bedroom. This is a much smaller room and the door is closed most of the day to keep our youngest from going skinny dipping in the toilet. When I open the door, I was just about knocked backwards by the very strong smell of the air freshener. Super strong, in fact. A great reminder that it was working and you really need to use this in smaller rooms to get the most benefit. Closing the door helped to keep the fragrance in instead of drifting out, of course, but the reduce room size helped greatly.

I’ll move the air freshener around the house as needed, but I expect it to spend its life in our bathroom for now. A good product but just not up to the task of fighting the smell of dirty diapers head on. If chemical warfare is not your goal, I think you’ll find the Febreze Set & Fresh to be a nice and subtle alternative to the many other air fresheners on the market today. Give it a try and see if it is for you. Just don’t expect it to Chuck Norris the strongest odors in the house (yes, Chuck Norris is so awesome you can use his name as a verb, too).

You can learn more about Febreze’s Set & Fresh  by visiting the official product web site.

I wrote this review while participating in a blog tour by Dad Central Consulting on behalf of Febreze and received a Set & Refresh unit plus refills to facilitate my review and a promotional item to thank me for taking the time to participate. Father Geek was not paid, bribed, wined, dined, or threatened in vain hopes of influencing this review. Such is the statuesque and legendary integrity of Father Geek.