Geek Organization: From Chaos to Order 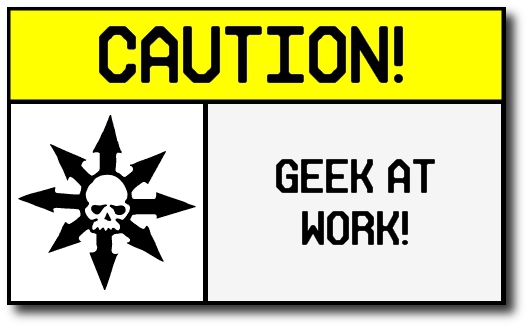 A while back, I posted my shame for the world to witness and laugh at. My game collection room was in complete disarray and in need of serious organization or a bulldozer. I opted for organization as the bulldozer would get mud on my carpet.

One of the items I was going to use to help me win the day was the Brother P-Touch Labeler. This snazzy little device not only created fantastic little adhesive labels for me to stick on anything and everything around the house (including my little geeks), but proved to be a worthy adversary in combat to boot! I fought it with chemicals and flame, but not once did it surrender or go gently into that good night, to quote Dylan Thomas. In fact, it was more tenacious than a snapping turtle with lockjaw. Which, if you don’t know, is pretty persistent.

Anything that can put up with the amount of abuse and still be legible has my vote and support!

I was eager to use the Brother P-Touch Labeler to organize my game collection but was at a loss on how to proceed. I had already purchased shelves from IKEA for the big game boxes and any boxes I was not using were being stored in an overflow closet. What then could I use the labeler for?

I went down into my game room and looked it over. The games on the floor were starting to make their way, slowly, to the shelves as I organized and shifted them into positions that made sense. At first I sorted them alphabetically and then by size. By size ended up working the best but I had a good deal of smaller games that were just too tiny to put on a shelf.

Ah-ha! I had found a perfect job for the labeler!

I have a number of smaller card and dice games that would look silly on the shelf. The perfect solution was to put these smaller games into groups and then put the groups into different boxes. I made a pilgrimage to my local IKEA and purchased several storage boxes that had the depth and the style I was looking for. After building the boxes, I organized my smaller games into logical groups, making certain that they fit in the box as I put them in different piles.

Once those games were in groupings I found to be meaningful, I packed them into the boxes and used the labeler to clearly show what each box contained. Additionally, I created labels for each game and put those on the inside of the box cover. This allowed me to do two things very quickly. First, I could find the type of game I was looking for (card or dice) as labeled on the box front. Second, all I had to do was lift lid of the box and see what games were stored there without the need to go digging through it. 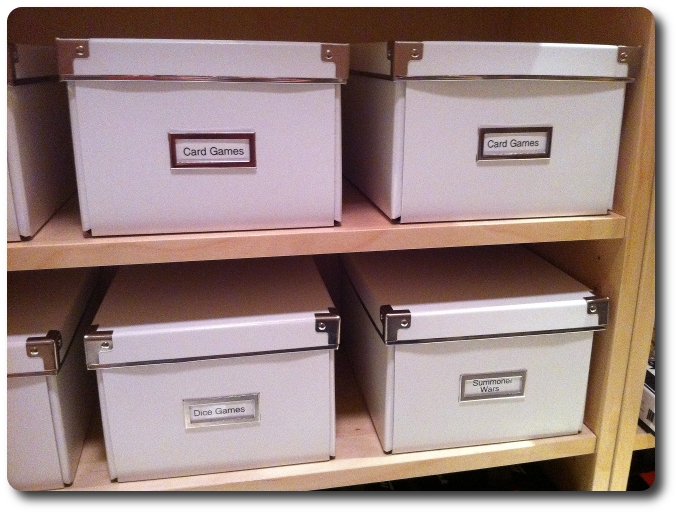 Each box holds about 7 games and makes it easy to quickly get to the game I want to play!

But I didn’t stop there. I also put together groupings of game expansions that were too small to put on the shelf but too big to put in the base game box. I also grouped  card games together, like Summoner Wars which would be way too time consuming (not to mention silly) to put on the game shelf. The end result was a very clean and easy to use organization system that I could continue to add to as needed. The label text made it very easy to quickly see what was in the box and gave the entire solution a crisp, clean finish.

Having solved my big to small game organization problem, I moved on to a side task that was focused on making some of the games more accessible. There are several games in my collection that are loaded with bits and pieces. So many, in fact, it makes storing them back in their original box an exercise in futility and setting the game up a length affair. The only solution is to put all those bits into separate boxes for easy retrieval and cleanup.

Turns out that your big box hardware and home improvement stores have just about anything and everything a Gamer Geek would want. I looked over the tackle boxes and storage trays in the sports departments but didn’t think anything offered would provide me with the best solution possible. I wandered the stores and found myself in the tools section where I came across a slick organization system that had small containers that fit into a larger case for easy transportation. This, I thought, was exactly what I was looking for!

I purchased several of them, which were surprisingly expensive, and spent the next week pulling out game pieces and organizing them into logical groupings. My two biggest games, BattleLore and World of Warcraft: The Board Game, were comprised of nothing more than bits and pieces! These two games took the most time but the end result was fantastic! 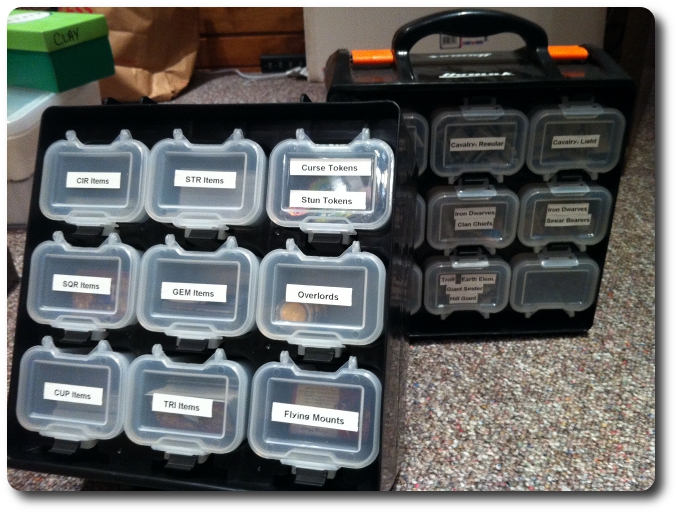 The hardware organizer was perfect for my game's smaller bits and pieces!

The Brother P-Touch Labeler once again worked very well to create labels on all the container tops which made it very quick and easy to scan the box covers and pull exactly what I needed. Now I had super fast access to the little bits and pieces of the games and a better way to store them.

Having an organized game collection room is absolutely fantastic and a tremendous stress reliever. Now I can find the games I want to play with my little geeks quickly and all my games are getting off the floor. The Brother P-Touch Labeler worked brilliantly and helped me craft labels that were sharp and customizable. The labels stuck easily to both plastic and paper, so I never once had to worry about what I was storing my games in. I had used a labeler in the past, but never to this extent. To say I was impressed and pleased with the labeler’s performance would be a gross understatement.

Work continues in the room as time permits. The end goal is to have a clean and enjoyable game collection room where my friends and family can look at and get games they want to play. I am not there yet, but progress is being made in leaps and bounds! The Brother P-Touch is going to be a very useful tool going forward.

Next Up: Geek Organization: Out With the Old, In With the New

2 Responses to Geek Organization: From Chaos to Order