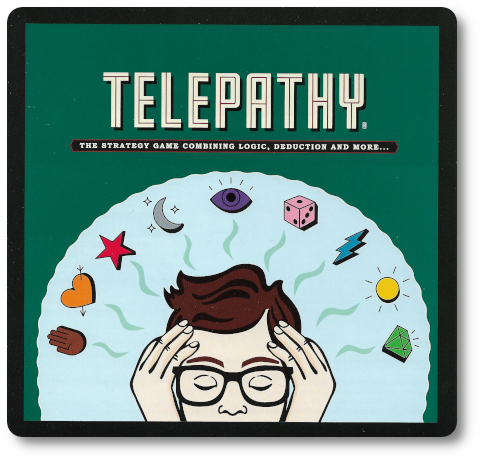 Telepathy is the ability to communicate using the mind, without the other senses. Fiction? Possibly. But then how do you explain the uncanny ability of twins or very close individuals who can communicate without speaking a word or even being in the same room? While science and science fiction may disagree on the authenticity of telepathic powers, you don’t need to be a mind reader to play this game.

Telepathy, designed by Derek Chinn and published by Mighty Fun, is comprised of two Telepathy game boards, two Secrecy shields, two Secrecy shield stands, two dry erase markers, and two dry erase cloths. The shields and game boards are solid, made of thick and sturdy cardboard. Color plays a big role in the game, making it difficult for those who are color blind. However, a key is provided with the color and its name, removing this possible barrier.

Second, each player now secretly selects one of the possible 324 squares on their Telepathy game board. On the Secrecy shield, the player writes down the four attributes that describe that square. Specifically, the row location, the column location, the symbol, and the color. For example, if I were to select the blue sun in row F12, I would update my Secrecy shield as follows (ensuring my opponent doesn’t see it). Note that players do not indicate their selected square on their Telepathy game board. 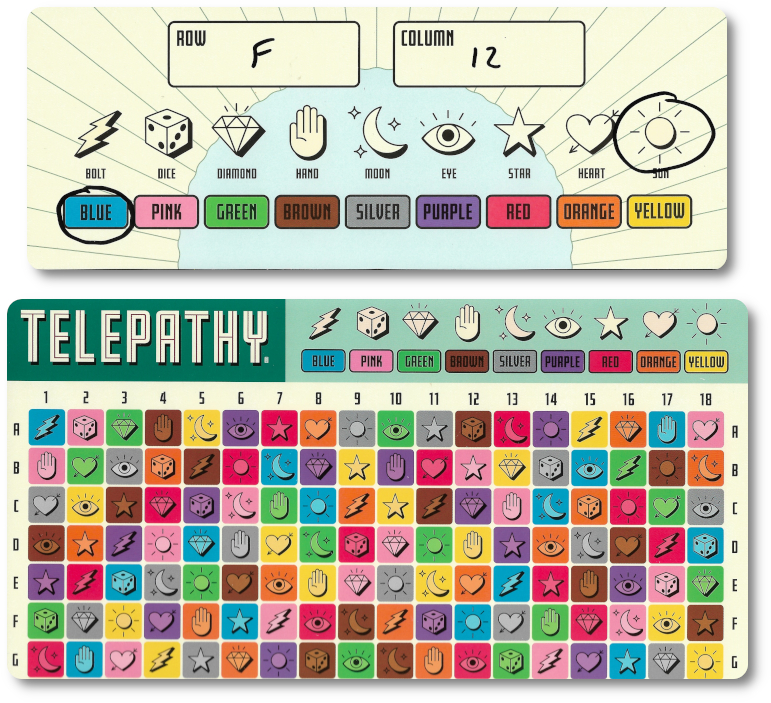 Secrecy shield at top, Telepathy game board at bottom

Telepathy is played in turns with no set number of turns per game. On a player’s turn, they can ask one question in hopes that they learn more information about one of the four attributes of their opponent’s selected square.

The player now knows that their opponent’s selected square is not in the D row, the 12th column, blue, or has the dice symbol. Given the opponent’s response, the player now updates their Telepathy game board with this information (using whatever marks they like).

If the player guesses their opponent’s selected square by chance, the opponent does not tell them. Instead, they respond with a “yes” and the game continues. The player must inform their opponent they are solving the puzzle for the guess to be considered the proposed solution.

This completes the player’s turn. The other player now takes their turn by making a guess based on any previous information they have learned.

I See Your Mind

When the player feels they have all the information they need, they state on their turn they will be solving the secret square puzzle. This must be done before they make their guess, as it indicates that the game is about to end! The player then states the square’s row, column, color, and symbol as they have done in previous turns. The big difference here being that they are not guessing.

Telepathy is primarily a two-player game. You can, however, play the game using teams. Each team should have the same number of players (two versus two, four versus four, etc.). Game play is the same, but a group of people work together to solve the puzzle.

To learn more about Telepathy, visit the game’s web page.

The Child Geeks gave Telepathy a mixed endorsement. While they thought the game was OK, it didn’t grab their attention or spark their imagination. According to one Child Geek, “The game is OK, but I’d rather play Battleship. At least when I guess, I feel like I did something interesting.” Another Child Geek said, “I like games like this. It makes me think and every answer from the other player helps you out.” As you can see, the Child Geeks’ reasons for liking or disliking the game seemed to be based on how the player felt when they received a response. Since Telepathy is devoid of any thematic elements, there is nothing to cling to, imagination wise. This served to be the deciding factor in regards to the Child Geek’s final vote. On an interesting sidenote, all the Child Geeks loved the game when they played it with a team. The higher level of interaction made the game much more entertaining.

The Parent Geeks didn’t mind the game’s lack of theme whatsoever and found the clean board and no-nonsense approach to deductive reasoning to be a breath of fresh air. According to one Parent Geek, “I like games that make the player really think. Not about their next move, but about what they have learned. I think this game does an excellent job of doing just that.” Another Parent Geek said, “The game is great with adults and even better with the kids. It’s a great tool to use to teach my children how to think through and use deductive reasoning.” Very true! As a teaching tool, Telepathy is certainly a good example. Just so happens that it’s also fun to play, according to the Parent Geeks.

The Gamer Geeks, like the Child Geeks, were also a mixed bag. According to one Gamer Geek, “I think the game is very well produced, to the point, and fully empowers the players to go about what the game intends. But is it a game? I don’t think so. More like an interactive puzzle. I don’t think that’s a lot of fun, as all I’m doing is guessing and the other player is telling me info. I’m not out-thinking my opponent. I’m just learning.” Another Gamer Geek said, “Logic puzzles like this are fun to play from time to time. I spend a great deal of energy trying to out strategize and tactically outmaneuver my opponents. Games like this let me slow down and think on another level.” When all the votes were in, there was no guess-work involved. The Gamer Geeks knew exactly how they felt about Telepathy.

The biggest benefit of Telepathy is its minimalism. Other logical deduction reasoning games like Battleship or Mastermind take time to set up. Not the case with Telepathy. Its simple approach gets you right to the reason why you want to play it in the first place. No muss, no fuss. The reason why I even bother to bring this up is that there are a lot of games like Telepathy in the market today. True, if you need thematic atmosphere to have fun (like some of Child Geeks required), Telepathy is going to leave you cold. But in the end, it provides the players everything they need using very little.

There isn’t much more to say about Telepathy, which makes it difficult to go into great detail about. This is a game you are going to like or dislike based purely on your take on what a deduction game should be. If you want just a basic logically deduction and reasoning game without it being watered down, then Telepathy is most certainly for you. If you need theme and narrative to spark your interest or be the reason you come to the gaming table, you won’t find Telepathy of much interest. And since I cannot read minds (yet…working on it), you’ll need to make the final choice yourself.