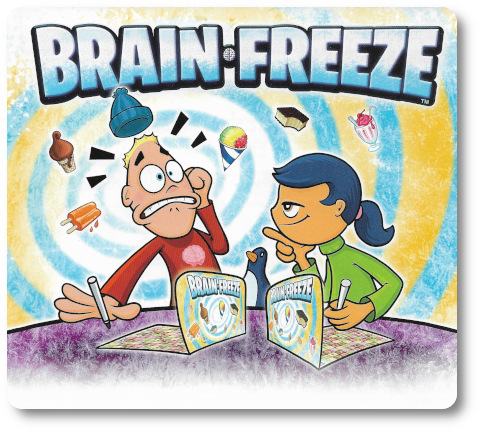 Ouch! Too much ice cream! Don’t you hate it when you do that? Nothing worse than a brain freeze when you are enjoying a cold treat on a warm day. You could always slow down, sure, but you can’t! It’ll melt! It’s a conundrum that science hasn’t solve yet. Come on, NASA! Get your priorities straight! Until they do, you’ll need to slow down and think it through. The same can be said about this game.

Second, each player now secretly selects one of the possible 100 squares on their game board. On the Secrecy shield, the player writes down the four attributes that describe that square. Specifically, the row location, the column location, the dessert type, and the flavor. For example, if I were to select the lime milkshake, I would update my Secrecy shield as follows (ensuring my opponent doesn’t see it). Note that players do not indicate their selected square on their game board. 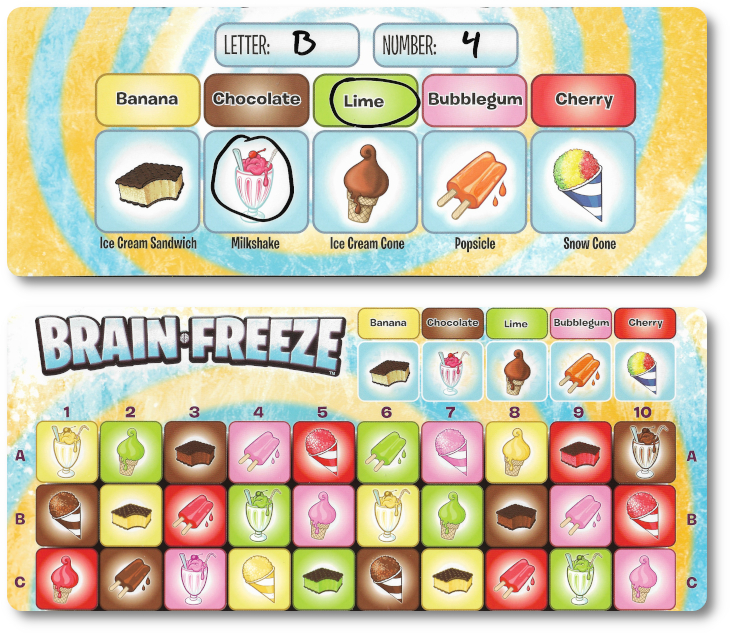 I Scream, You Scream, We All Scream for Guessing Squares

Brain Freeze is played in turns with no set number of turns per game. On a player’s turn, they can ask one question in hopes that they learn more information about one of the four attributes of their opponent’s selected square.

The player now knows that their opponent’s selected square could be in the C row, the 5th column, is chocolate, or is a snow cone. But that’s it! Given the opponent’s response, the player now updates their game board with this information (using whatever marks they like).

If the player guesses their opponent’s selected square by chance, the opponent does not tell them. Instead, they respond with a “yes” and the game continues. The player must inform their opponent they are solving the puzzle for the guess to be considered the proposed solution.

This completes the player’s turn. The other player now takes their turn by making a guess based on any previous information they have learned.

When the player feels they have all the information they need, they state on their turn they will be solving the secret square puzzle. This must be done before they make their guess, as it indicates that the game is about to end! The player then states the square’s row, column, flavor, and dessert as they have done in previous turns. The big difference here being that they are not guessing.

Brain Freeze is primarily a two-player game. You can, however, play the game using teams. Each team should have the same number of players (two versus two, four versus four, etc.). Game play is the same, but a group of people work together to solve the puzzle.

The Child Geeks, as it turns out, like things that deal with sugar. I know. BIG SURPRISE! Oddly enough, they spent an equal amount of time talking about their favorite dessert as they did playing the game. For example, I overheard one Child Geek say to another, “J10, lime snow cone, which I think are the best thing in the world.” One aspect of the game, however, that tripped up the Child Geeks was identifying the dessert. For example, a group identified one of the symbols as a “shake” and a “Sunday”. The “snow cone” was also called an “icee”. All are correct, as we are just talking about symbols, but this caused confusion and delay. Each dessert is spelled out, but the Child Geeks didn’t think of reading or remembering it. According to one Child Geek, “The game is pretty good until you mess up your treats.” When all the games were over, the Child Geeks gave Brain Freeze a mixed endorsement, finding it to be OK, but it didn’t do much in the way of grab their full attention. They did all agree that dessert was the best part of the meal.

The Parent Geeks liked the game and found it to be a good tool to entertain and to educate. According to one Parent Geek, “I think more games should teach our children important skills. Deductive reasoning is very important, as it teaches children to stop and think.” True, but how much fun can that be? As one Parent Geek put it, “I’m not big on tricking my kids, but I think this game does a great job of disguising itself as fun when it is actually helping kids learn.” The Parent Geeks all found Brain Freeze to be entertaining, but really only with their kids. Its obvious focus on the younger crowd made the game itself feels out-of-place when only played with adults. Regardless, all the Parent Geeks approved Brain Freeze, focusing more on its use as an educational and entertaining tool rather than a board game.

The Gamer Geeks found the game to be OK, but not for them. According to one Gamer Geek, “Solid game mechanics and easy rules. Makes for easy set up and game play, but the game feels too kiddy for me. All this talk of treats and such made it too sugary sweet.” Another Gamer Geek said, “Great skills being taught here and I think the game will do well with the younger crowd. As an adult, I don’t need all this jazz about dessert.” It was the game’s obvious attempt to snag its audience with sugary goodness that turned the Gamer Geeks off. No problem with the game’s mechanics. It was how it was being served that caused them to lose their appetite.

To be blunt, Brain Freeze is the “kid” version of Telepathy. It’s the same game. The only difference being fewer possible square choices and sugar is involved, thematically speaking. But that’s it. The game is no less complicated or easy. And this is where I get a bit confused. The game box says the game is for players that are five years old and above, but Telepathy is for players who are ten or older. Why? There is nothing different in the game play. No change in the game’s approach to winning.

Oh, I get it. Marketing.

True, the same Child Geeks who played Telepathy seemed to connect on a deeper level with Brain Freeze, but that allure wore off pretty quick. Images and talks of ice cream treats peaked their interest, but it’s the game the Child Geeks remember. Yes, they wanted ice cream afterwards, but you’d be hard pressed to find any child who wasn’t eager to devour a soft-frozen sweetened and flavored milk fat treat on a stick or in a cone.

If it came to this game or Telepathy, I’d say go with Telepathy. Brain Freeze unnecessarily and oddly reduced its scope, but not its complexity. It just feels off. Of course, if the goal is to lure the Child Geeks to play a game, this will do the trick. But tricking is not the goal. Fun is. Brain Freeze will delivery that, but I suggest you look for more than just a quick sugar hit.