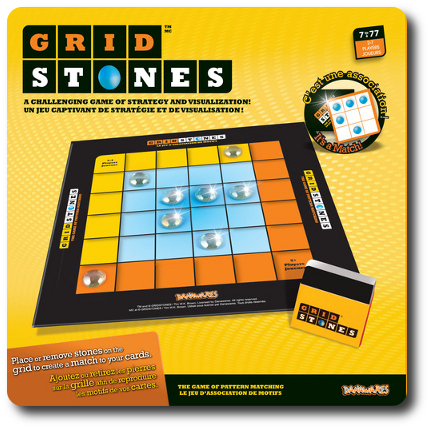 Edward de Bono said, “Creativity involves breaking out of established patterns in order to look at things in a different way.” But a human mind cannot help but look for and establish patterns as part of its process of incorporating information. Cause and effect are two essential principles that help us learn and adapt. In this game, you must find the patterns, but at the same time, break them to find what you are looking for!

Gridstones, designed by Tim W. K. Brown and published by CSE Games, is comprised of 1 game board, 52 Grid cards, 35 stones, and 1 holding bag. The game board is made of thick cardboard and the Grid cards are made of cardstock. The “stones” are small rounded glass beads that are flat on one side.

Second, place the stones in the holding bag and place the bag next to the game board.

Gridstones is played in rounds with each player taking a turn per round. A player’s turn is comprised of 3 sequential steps, which are summarized here.

The first step a player will complete focuses on identifying if the stones currently on the game board grid match any patterns the player has on their Grid cards. The Grid cards can be turned in any direction to help facilitate a visual match. The pattern must be a 1:1 match with a 3 x 3 grid area. The 3 x 3 grid area can be located anywhere within the grid boundaries.

The player is welcome to play multiple Grid cards if they have multiple matches.

Step 2: Add or Remove a Stone

The second step, regardless if the player was able to make a match or not with their Grid cards, is to either ADD a stone to any open space within the game board grid boundaries or REMOVE a stone. If there are no stones to add, the player must remove one. If there are no stones to remove, the player must add one. Players cannot MOVE stones already on the board game grid to another location on the board game grid.

The third step is a repeat of the first step.

The first player to play their last Grid card during step 1 or step 3 of their turn wins the game.

To ensure a 2-player game does not become a stalemate, neither player can remove the same stone that was added by their opponent during their last turn. Likewise, a player cannot add a stone to the same square their opponent just removed a stone from.

Each player starts with 3 Grid cards and plays the game as described above with one exception. When a player makes a match, they draw a new Grid card. The new Grid card can be immediately matched if possible. The first player to make 10 matches wins. If all the Grid cards have been played and none of the players have made 10 matches, the player with the most matches wins.

The game is set up and played as normal with one exception. The game continues to be played until one player is left holding cards. This player is eliminated and a new game is started, minus the player who was eliminated from the last game. The game continues until only 1 player remains. The only player not to be eliminated is the winner. Note that as the number of players change, so too does the game grid boundaries.

To learn more about Gridstones, visit the game’s web page.

Simple Puzzle and Abstract Strategy games can be a mixed bag. For the most part, the Child Geeks enjoy them if the learning curve is easy and they feel like they have control of the game’s outcome during the game play. Sometimes, however, the abstract nature of the game makes it difficult for some of the Child Geeks to superimpose more concrete ideas on top of the game. This is why games with a heavy theme and narrative tend to do better due to the player being able to make a faster and stronger connection between their actions and what it means to the game. Not always, though, and a Child Geek’s mind can be very creative. For example, in the Abstract Strategy game, Rise!, our Child Geeks (and everyone else, for that matter) interpreted the game pieces differently.

For the Parent Geeks, I believe Gridstones will be a welcoming experience at the family gaming table. The game is easy to learn and fits a good-sized number of players. The game play would appear to be very casual and the overall difficulty is pretty slight when we consider how many times the player can move the stones.

For the Gamer Geeks, I doubt we’ll see Gridstones get anything more than an appreciative node. The game doesn’t have enough depth or strategy to be of much interest for the Gamer Geeks. A few of them will enjoy it, no doubt, but not enough to allow it to get the approval endorsement.

And so, after teaching Gridstones to my two oldest little geeks, I asked them their thoughts on the game so far.

“An easy game of pattern building and matching. No problem.” ~ Liam (age 9)

“This is just like a puzzle. I just have to match what I see on my cards to what I build on the game board.” ~ Nyhus (age 6)

Let’s play Gridstones and see if the final pattern reveals an entertaining game.

Gridstones met with mixed levels of success with our Child Geeks. If the Child Geek was patient, they did rather well in the game. Gridstones is won by taking small steps and working on several patterns at the same time. The younger and less experienced Child Geeks tended to focus on just one pattern at a time. This is a mistake and will result in frustration as the stones will be shifting out from underneath the player when it isn’t their turn. The more mature and experienced Child Geeks recognized this and held their own. When the games were over, the final vote resulted in a mixed level of approval from the Child Geek group. According to one Child Geek, “This is a good game, but I found it too frustrating at times. Dad kept moving the stones I needed.” Yes, parents can be problematic. 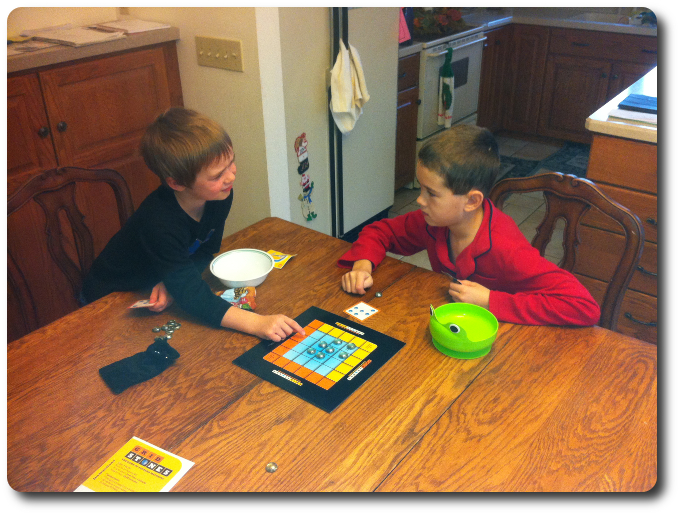 The Parent Geeks rather enjoyed Gridstones, finding it to be a casual puzzle solving game of “strategic pattern making”. That last part is in quotes because that is how one Parent Geek described the game. They said, “I like Gridstones because it allows me to make strategic patterns in multiple areas of the board. I found that oddly entertaining.” As did the majority of the Parent Geeks. The Parent Geeks also really liked how well the game scaled with different numbers of players. A 2-player game with a child or a peer felt just as fun and as challenging as a 6-player game. This is because the overall grid area changes and accommodates more patterns, as well as more stones. The overall difficulty remained the same throughout and the game always felt very satisfying. According to one Parent Geek, “This is one of those games I’d bring out to play with my kids or just play with some of my adult friends over a glass of wine.”

The Gamer Geeks, as predicted, found Gridstones to be a well designed game, but the overall game play did not interest them. A few of the Gamer Geeks, but not nearly enough, enjoyed playing the game and were ready to play it again (a sure sign that a Gamer Geek thinks the game is a good one). According to one of the Gamer Geeks who really enjoyed Gridstones, “What I like about this game is that you have to manage a lot at one time, but you never feel overwhelmed. Patterns are everywhere. The real challenge is simply seeing them.” All the Gamer Geeks agreed, but according to another Gamer Geek, “I agree, but this is a game I can tolerate, at best, and would play only if asked to. I wouldn’t seek it out or request to play it with my gamer friends.” In the end, the Gamer Geeks gave the game their collective thumbs-up, but not their endorsement.

Gridstones is a thinking game. As such, it can get rather slow at times from the perspective of a player who wants their turn to happen “right now” because they see a pattern to claim. This means that players have to be patient with the game, as well as with themselves. Patterns will quickly come and go, but a player always has the ability to create new patterns on their turn. There is a lot of power given to the player, despite it feeling like the game slips out from their realm of control at times.

Gridstones is also one of those strange games that will either become more difficult or easier as the game progresses. For example, I found playing the game with a full accompaniment of Grid cards to be easier than when playing with just one. This is because I found it easier (and more entertaining) to work on multiple patterns at the same time. When I was forced to work on only one, opportunities to find matches became much more complicated. On the other hand, our Child and Parent Geeks who had a hard time managing several patterns at once, found that the game became easier as their total number of Grid cards in their hand were reduced.

I enjoyed Gridstones, but it’s not a game I would want to play with anyone else but my family and Parent Geek peers. It provides a fun and casual challenge, but not enough for me when I want a deep game with lots of strategy and tactics. Gridstones provides enough to keep me engaged, but not overly enthralled or interested. It quickly begins to feel repetitive until you are able to make a match. I would recommend Gridstones to families who enjoy a good Puzzle and Abstract Strategy game. Gridstones will keep your mind busy looking for the patterns in the patterns.

One Response to Gridstones Game Review