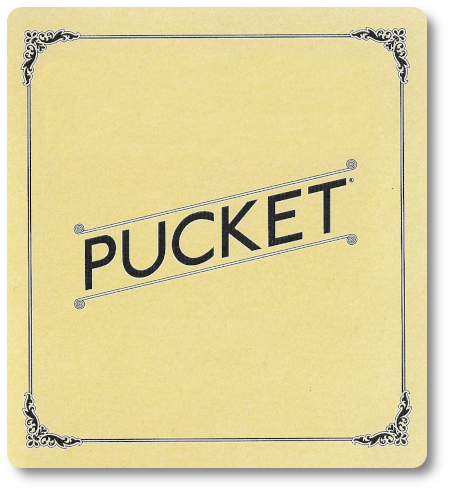 One of the most well-known Italian polymaths of the Renaissance, Leonardo da Vinci, said “Simplicity is the ultimate sophistication.” Activities don’t have to be difficult to be entertaining, and seemingly simple tasks can be surprisingly complex. For example, how difficult can it be to pass a small wooden puck to another side of a board? The answer will surprise you. Wait, no it won’t.

Pucket (based on the French game Table à Elastique), designed and published by ET Games, is comprised of a long wooden board, 16 wooden discs (referred to as “pucks”), two wooden tension pegs, and a cotton bag to hold all the discs and pegs in. The entire board is hand crafted by a team of artisans in Uttar Pardesh, North India who are part of a fair trade program. The natural variations in the different woods used in the game’s construction make every game board unique. Ours is solidly constructed, beautiful to look at, and fun to play on. True gamer craftsmanship.

To set up the game, first place the game board on a level surface and have each player sit (or stand) on opposite ends of the board, towards the elastic bands.

Second, give each player eight pucks. The game board is divided in two by a wooden cross-section with a small gap in its middle refereed to as the “gate”. The open areas between the wooden divide, on their side of the gate, is considered the player’s area. The pucks can be arranged in whatever fashion the player’s like (there are no rules to suggest otherwise), but the most common set up is to place the pucks on the far sides of the player’s area (as shown in the following image). 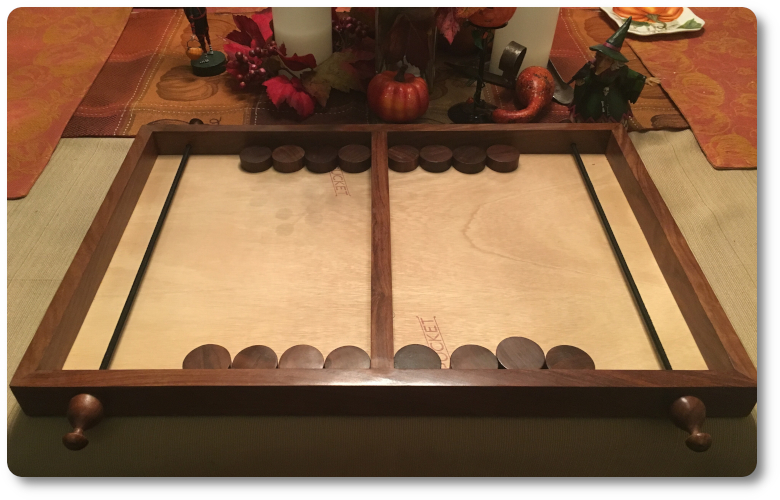 That’s it for game set up. If necessary, give each player a wooden tension peg. These are used to temporarily increase the amount of tension on the elastic band if needed.

Pucket is played in real-time, meaning there are no turns. Players start the game on an agreed upon command and continue to play until the victory condition has been met. What a player does during the game is straightforward in its execution, requiring little thinking.

A player can never move a puck forward without using the elastic band. That is to say, it’s illegal to push or finger flick a disc towards the gate. A player can, however, move pucks to the side of their area to make room and create a clear path towards the gate.

How the player goes about sending the pucks using the elastic band is up to them. The only hard and fast rule is that the elastic band must be the only means in which the puck is propelled. This means a player can use a few fingers, a whole hand, or even both hands (which is legal, but crazy-overkill).

The rule book comes with descriptions of several different techniques. My favorite is “The Garner” which is described as follows.

“Drag a puck back against the elastic and let go, first with one hand and then the other. This produces the highest firing rate but only Mr. Garner himself can combine it with good accuracy.”

No idea who Mr. Garner is, but he had mad skills, yo. This technique is not easy, but if you can get it down, dang. It lets you pass those pucks very quickly, each hand being used on one puck each. Talk about rapid fire! Combine it with accuracy, and you have reached the same plateau of excellence that Mr. Garner is apparently camped on.

If, in the heat of the game play, a puck flies off the board (and it will), the game is temporarily paused. The puck is retrieved, placed in the area of the player who retrieved it, and then the game resumes on an agreed upon command.

The game continues, with players as quickly and as expertly as possible, sliding pucks through the gate and into their opponent’s area. When one player no longer has any pucks in their area, meaning their opponent has all the pucks on their side, the game is over. The player who cleared their area is the winner.

Pucket is a very fast game. As such, it’s not only perfect for short gaming experiences, but also excellent for fun tournament play. To do so, get all your players together and have them play three games per session, with the winner of each session advancing in the tournament. Continue to do this (it’s suggested you use the “ladder” tournament style) until you have a winner. Prizes are optional.

To learn more about Pucket, visit the game’s web page.

The Child Geeks enjoyed the game, and even when it was clear their opponent was a better shot than them, they never once felt overly stressed or pressured. According to one Child Geek, “The game goes so fast, you don’t have time to think. You just have to go, go, go!” Another Child Geek suggested that the game was “Like trying to get ready for school when you are already late”. Which, honestly, sounds stressful, but the Child Geeks all loved the game’s intense focus and energy. This allowed them to zero in on the game’s goal for a short amount of time and then walk away for a quick breather (which was most often in the form of a snack). Despite the game’s level of intensity, the Child Geeks found Pucket to be “relaxing”. When all the pucks were in their place, the Child Geeks applauded the game.

The Parent Geeks also enjoyed the game, finding it to be entertaining to play with their kids and whatever adult friend was within arms length. The only issue they had with the game was it’s overall size. According to one Parent Geek, “The game is very well made, great wooden pits, and solid. Which is all great if I was looking to buy a piece of furniture. I don’t know where I’d put this game in my house.” Available space to play a game (and more times than not, store) is a concern for Parent Geeks, as they see building their collection of entertaining boards and bits to be in direct competition to all the other “stuff” they have to keep. Another Parent Geek said, “Loved the game. Fun. Energetic. Focused. Fast. I like games that are to the point. I wish more people were this upfront with me.” Well…OK. Sure. Man, I get odd feedback. The Parent Geeks all agreed to approve Pucket.

The Gamer Geeks played the game and then put it away. It just wasn’t for them. According to one Gamer Geek, “We played a similar game to this a number of years ago and I thought it was OK. Mostly because how quick it was to play and then put away. This game is just a bigger, heavier, louder version. I wouldn’t want it only because its size outweighs (figuratively) the fun it provides.” Another Gamer Geek said, “I liked games like this when I was a kid. As an adult, I want a game that stimulates me. All this game did was make me feel like I was working hard without gaining much. Zero thinking involved here.” When all the pucks were launched, the game was put away and forgotten by our gaming elitists.

A word of warning. This game can get pretty intense. Players will be moving as fast as possible without much thought of how they go about the shot. The game suggests there is a strategy, but not really. A player wins when they no longer have pucks to chuck. That means this game is more about repetitive speed than accuracy. True, a player who is a crack-shot will spend less time missing, but this game is all about repetitive speed. It’s for that reason you should expect the pucks to fly right out of the box and hit people observing the game. One of our players got hit right below the eye. Nothing to be concerned about, but be aware that pucks move fast, hit fast, and can fly fast.

As for the game play, the game is nothing more than what it tells you up front. “Hi! I’m a game where you do things really fast and don’t have to think about it!” And that’s it. I do appreciate the fact that a player could “think” through their moves, but that isn’t necessary. In fact, I’d suggest a player who “thinks” in this game is holding themselves back. Hand and eye coordination is all that is needed along with nimble fingers. Oddly enough, the Child Geeks had a slight advantage, since they were lower to the table and the puck size was perfect for their little hands. The player who wins, every time, is the one who is the most skilled at repetition. Which I would argue is not much of skill.

Pucket is beautiful to look at and well crafted. It’s something you’d be happy to put on your coffee table, but wouldn’t want it there, because jeepers, it’s big. Measuring in at 54 by 40 centimeters (approximately 21 inches by 15 inches), it takes up a lot of space. The great news here is that the space it takes is filled with fun, and man, is it well made. If you like action/dexterity games, where a fast hand out-beats a sharp mind each and every time, do play Pucket.