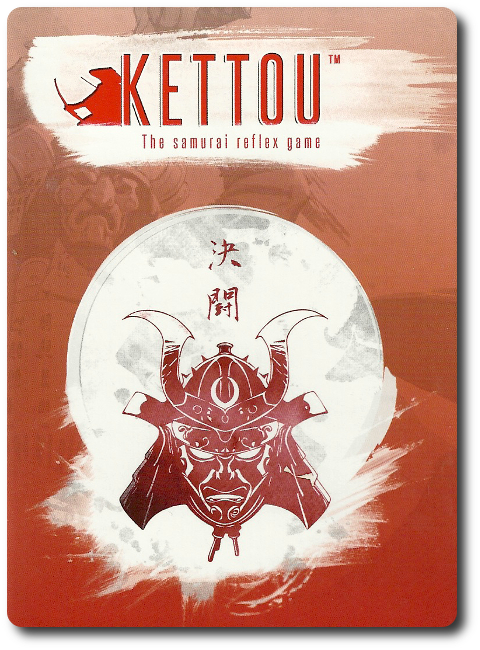 Japanese-American cartoonist and comic book creator, Stan Sakai, said “A samurai should always be prepared for death – whether his own or someone else’s.” To live by the sword is to die by the sword. The way of Bushido is the way of balance, of courage, and sacrifice. It’s time you tested your skill to see if your years of training have prepared you for this moment. Death is assured, but not necessarily yours.

Kettou, designed by Thomas Song and published by Table Forged, is comprised of 36 Combat cards, 21 Bushido cards, 8 Samurai cards, 17 Hit cards, and 6 standard six-sided dice. The cards are as thick and as durable as your standard playing card, minimalistic in presentation, and highly stylized. Artist Cory Trego-Erdner has captured the spirits of the Samurai perfectly. Dark, brooding, and altogether badass.

The Way of Bushido

There are several card types in the game. Each plays a specific role and interacts with the other cards in special ways. The card types are summarized here.

The eight Samurai cards represent the warriors in the game. Each has an Attack value, a Hit Point value, and a Special Ability. The Attack value indicates the amount of damage dealt if an attack is successful. The Hit Point value indicates how much total damage the Samurai can take before it’s removed from the game. Special Abilities are conditional and unique to each Samurai in play, granting the Samurai a bonus or specific tactical benefit. 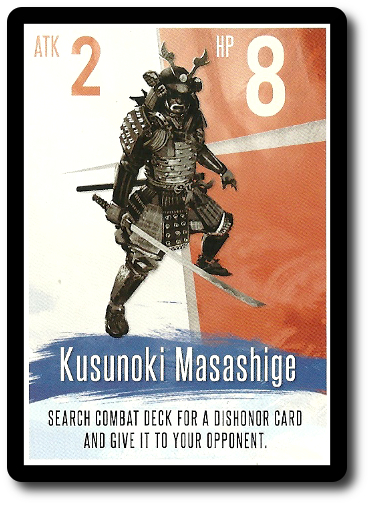 The Bushido cards represent the moves the Samurai take during their duel. As the game progresses, a Bushido card will be attached to a Combat card. 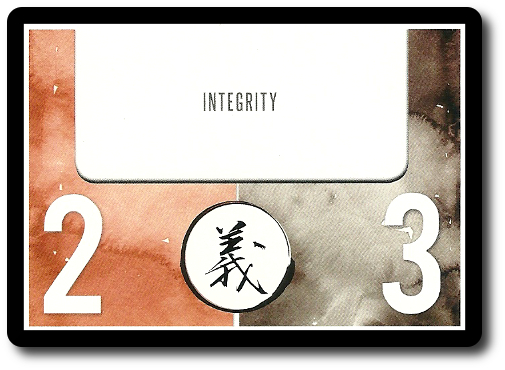 The Hit cards are used as both a Reader and to signify where the attack is being targeted. 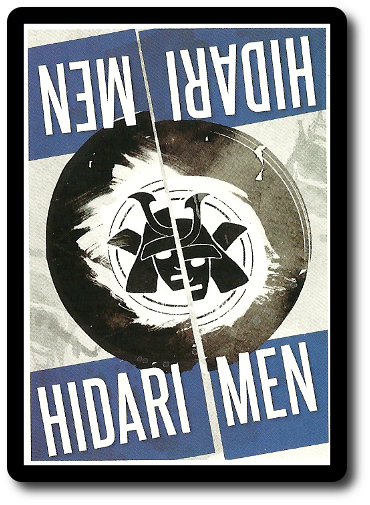 To set up the game, first give each player a set of Bushido cards. Have the players arrange them so the number values run from lowest to highest from left to right in front of them in a row. The last card on the far right of the row should be the “Loyalty” Bushido card.

Second, separate the Hit cards into their two different piles, Reader and Combat (not the same as the Combat cards). The Reader pile will include the “Tsuki” Hit card. Shuffle each pile and place them face-down. Keep track of which pile is for Combat and which is the Reader. Draw the first four Combat cards and place them face-up in the middle of the playing area.

Third, place the Samurai cards face-up off to one side and have each player roll the dice to determine who gets to pick their Samurai first. The number of Samurai cards used is dependent on the game type being played.

Fifth, give each player two dice to keep track of individual Samurai health.

That’s it for game set up. Time to draw your sword.

Kettou is played in rounds with no set number of rounds per game. A typical game round is summarized here.

The two players who are facing off against each other have third-player announce the Reader card. The first player to correctly touch the matching Hit card strikes their opponent and deals damage. If the wrong Hit card is touched, the player is penalized by being forced to relocate their Combat card on their Bushido cards.

Each player takes a turn rolling two six-sided dice and matching the rolled value to their Bushido card. Bonus damage is dealt and reduced as needed. If a Kata is rolled, it’s resolved at this time. If a Samurai is defeated, it’s replaced with a new Samurai.

The game continues until only one player has any Samurai left. The last Samurai standing is literally and figuratively the winner.

To learn more about Kettou, visit the game’s web page.

The Child Geeks slammed the hell out of the table during this game to a point where I was surprised no one walked away from the game with a hurt hand. The Child Geeks quickly realized that victory would go to the fastest player, but also to the player who listened and observed the closest, too. According to one Child Geek, “You need to be fast to win, but you also have to pay attention. If you jump too soon, you’ll lose your chance to strike.” Which is to say, if the players incorrectly touched the wrong card, the penalty for doing so was harsh enough to make all the players quickly learn to listen intently before they acted quickly. Another Child Geek said, “I like the combat the best. The rest of the game – just rolling dice – feels like you are just finishing up the combat.” The Child Geeks all had a great time and voted to approve Kettou.

The Parent Geeks also had a great time and even found that the game was just as enjoyable with their family as it was with their peers. According to one non-gamer Parent Geek, “The game reminds me a bit of Slap Jack, a game I played with my kids. But this one makes a lot more sense why you are slapping the cards.” The importance of being the first to slap a card was not lost on the Parent Geeks anymore than it was lost on their younger counterparts. Like the Child Geeks, the Parent Geeks understood that being the first to strike was important, but they put a lot more time and energy into their Bushido cards with matching Combat cards. As one Parent Geek put it, “Being fast is important, but being skilled and fast will win you the game.” When all the games were over, the Parent Geeks voted to approve Kettou.

The Gamer Geeks immediately liked how the game captured the importance of the first sword strike by using dexterity and speed elements to mimic sword slashes. According to one Gamer Geek, “I always like it when the game designer implements a game mechanic that not only makes sense, but captures the game’s narrative and theme. Using speed and slapping on the table to represent sword strikes is brilliant.” The Gamer Geeks also really liked how they were able to build out their Bushido, drafting the cards they wanted to use to create a balanced warrior, an assassin, or a defensive wall. As one Gamer Geek put it, “Mixing and matching Combat cards with your Samurai’s special abilities allows you to build the warrior you want, emphasising on combat elements you want to take advantage of.” All the Gamer Geeks voted to approve Kettou, finding it to be a great filler game.

The game makes excellent use of dexterity and tactics. The role of dice in the game may make it feel like a random experience, but this is not the case. The individual who wins the combat and gets to strike first is the fastest player. From there, the dice are used to enhance or offset the speed of the game, but never to a point where it completely trumps the dexterity element. If you are the fasted and paying the most attention, you will always win combat. In this way, the game captured the tense moment between two Samurai who are facing each other down, waiting for the other to make a move.

Katas are possible game changers, as some allow the player to rearrange the Combat cards on their Bushido cards or kill the Samurai. This could spell massive trouble for the player’s opponent who could have possibly been building their Bushido cards in conjunction to what the player was building. Of course, since which Bushido card is used is always random, it might not make that much of a difference game mechanic wise. Psychologically, however, it hits a soft spot and starts to bleed the opponent’s moral. Drafting the right Combat cards is going to make all the difference in the long run.

Overall I am very pleased with the game. I thought it captured the feeling of a Samurai duel perfectly, mixing tactical and strategic game play with physical speed and dexterity. Mixing the elements of the mind and the body in a way that felt both natural and exciting. While I was not an overall fan of some of the game play (didn’t care for team play, for example), the game is perfect for lighter fillers and those moments when you want to inject some quick fun into the mix with a burst of energy. The biggest issue you will have with the game is being mismatched with another opponent who is either not as fast or simply faster than you. This makes the game feel very one-sided and it will quickly tank. Nothing can be done, however, other than being either faster or slowing yourself down, which I do not recommend. Victory should go to the fastest player.