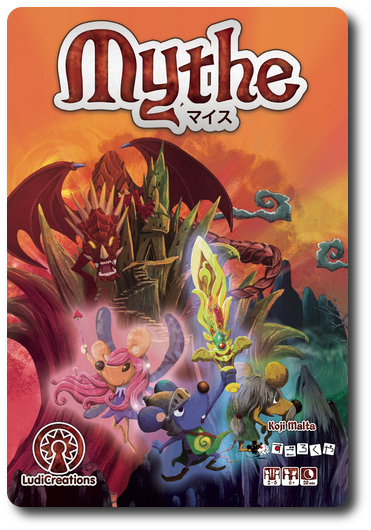 Roman playwright, Plautus, wrote “A mouse does not rely on just one hole.” Mice are survivors and even though they seem to take risks, each is calculated. In this game, each player will be taking on the role of a mouse who is looking for adventure and will ultimately find danger. At the end of the journey lies the greatest treasure a mouse could hope for and a dragon. Will you risk it all to become a mouse hero?

Mythe, designed by Koji Malta and published by LudiCreations, is comprised of 16 Adventure cards, 5 Reference cards (in five different colors), 1 Red Dragon token, 1 Sacred Cheese token, 5 Mice tokens (in five different colors), and 1 pop-up game board (yes, it pops-up). The game is bright and colorful. Artists Yoshihiro Arisawa and Sami Laakso have mixed classical high-fantasy with cartoonish mice, presenting a whimsical world full of humor and danger. The game components are excellent. The cards are thick and durable and the tokens are made of wood. The real story, however, is the pop-up game board that, when unfolded, creates a 3D representation of the fantasy world our mice heroes live in. 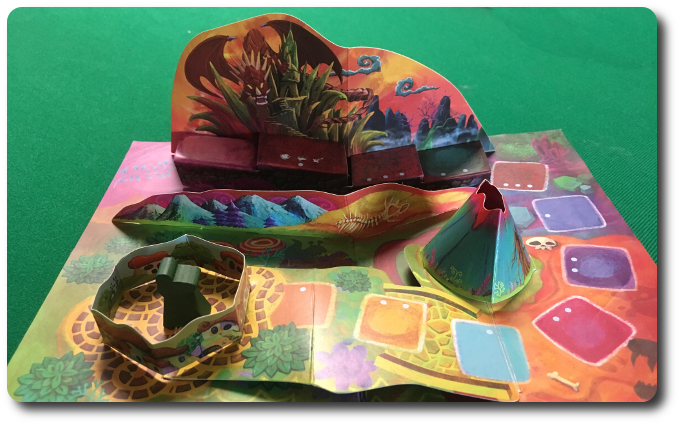 Fourth, remove a specified number of Adventure cards from the game (based on the number of players) and shuffle the rest. Select a first player and have that player deal out all the Adventure cards, face-down. Some players may have more cards than others. Players should look at their cards but keep them hidden from opponents.

That’s it for game set up. Time to go on an adventure of epic tiny proportions.

Mythe is played in turns. A player’s turn consists of two phases which are summarized here.

At the start of every player’s turn, they must draw 1 card at random from an opponent of their choice. The drawn card is placed face-up in front of the active player. 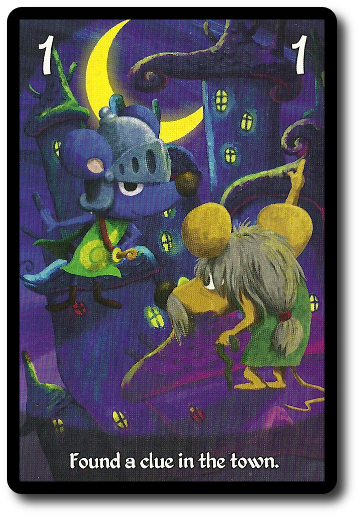 After the mandatory action, the player has two optional actions they can take during this phase.

The first option is to continue to draw cards. This is called “Adventuring”. The active player randomly draws a card from an opponent’s hand of their choice, adding it to any cards already face-up on the table. The player can continue to draw cards as long as they like, but if they draw an “obstacle” (indicated by a skull icon), the current phase immediately ends, continuing to phase 2. This also applies to the player’s first card draw. If the first card drawn is an obstacle, they immediately continue to phase 2. 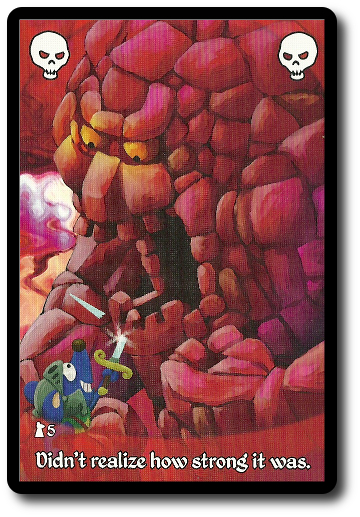 The second option is to Advance, which can be taken before more cards are drawn or anytime afterward as long as the player did not draw an obstacle. The player adds up all Adventure card number values (referred to as “Adventure points”) in front of them. The number of Adventure points earned determines the number of spaces the player’s Mouse token can travel on the game board. Not all spaces are equal, however, and some require more movement points than others to pass through. If the player is unable to pay for the total movement to go through a space, they cannot continue. Additionally, only one Mouse token can ever occupy a space at a time (with the exception of the village space). After moving, the player continues their turn by resolving phase 2.

The player now takes all the cards they drew during phase 1 and adds them to their hand. The active player then decides how many cards they want to give to each player. This could be any number, including zero. The number of cards selected are distributed as evenly as possible among the active player’s opponents, face-down, one by one. Given cards are immediately added to the opponent’s hand. When completed, each player must have at least 1 card in their hand.

This completes the active player’s turn. The next player in turn order sequence now takes their turn starting with phase 1.

Of Mice and Dragons

Eventually, a player will advance far enough on the quest to encounter the Red Dragon and have a chance to claim the Sacred Cheese. In order to enter the Red Dragon’s space, they must have the correct number of Adventure points and a “Legendary Item” Adventure card in their hand (not drawn from an opponent during phase 1). 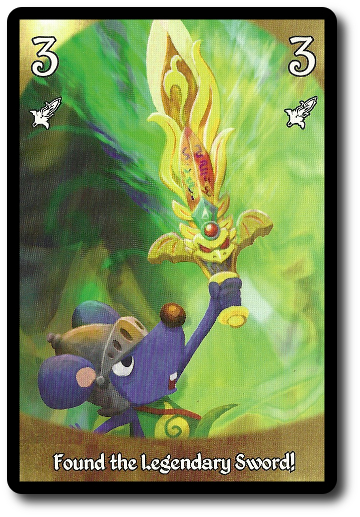 If the player manages to move into the Red Dragon’s space with the necessary Adventure points and has a Legendary Item, they slay the horrid beast and claim the Sacred Cheese, thus winning the game.

To learn more about Mythe, visit the game’s web page.

The Child Geeks loved the artwork and the game’s theme, immediately getting into the game play. According to one Child Geek, “What I like most about this game is the feeling of adventure you get when you get cards from other players.” There is an element danger and risk each time a card is pulled, but also an opportunity for great reward. Mythe is a game that encourages bravery and boldness. Those who take their time and play it safe will be left far behind. According to another Child Geek, “The dragon was easy to kill, but the real challenge was getting there first.” It’s true that the Red Dragon is not an insurmountable obstacle by any means. All one needs is a Legendary Item and the Adventure points to carry them to victory. The real challenge is collecting the right cards and perfecting timing. Luck and tenacity play an equal role, but feel subdued. When the adventures were over, all the Child Geeks voted to approve Mythe.

The Parent Geeks were very impressed with the game’s presentation and how easy it played. According to one Parent Geek, “The game looks so small and harmless. I never would have thought I would be spending so much time considering if I wanted to draw a card or not.” What this Parent Geek is referring to is the decision making in the game. There isn’t much, to be perfectly honest, but what choices there are can make or break a player’s turn. Draw an obstacle and your turn is over, but if you keep risking and pushing the limits, a tiny mouse could find themselves swept away to a grand adventure. Another Parent Geek said, “I think this is the perfect kind of game to teach new players about risk and reward and an excellent reminder to game veterans that you don’t need a big game to have a great time.” When the Sacred Cheese was claimed (and assumed consumed), all the Parent Geeks voted to approve the game.

The Gamer Geeks really liked how the game looked but were lukewarm about the game play. According to one Gamer Geek, “I like the game’s style and presentation. Simply excellent. The game play is a bit dull, though. Your odds of pulling an obstacle keep changing, but I never felt the tension build as a result. Just the need to end my turn.” Another Gamer Geek said, “I think this is a great game for kids, for families, and non-gamers. I might even be persuaded to play this as a filler, but for elitist gamers, there isn’t enough to the game to make it a great time.” To be clear, the Gamer Geeks found the game play just find. In fact, several times during the game sessions, the Gamer Geeks mentioned how smooth the game play was. What ultimately turned the gaming elitists away was the risk-taking element of the game. Drawing cards blindly didn’t do it for them, because the only information they ever learned was that there was one fewer card to draw. But that’s it. More than enough for everyone else, but not enough for our gaming gods. This resulted in the Gamer Geeks giving Mythe a mixed endorsement. They cheered the game, but didn’t think it was for them. They would welcome a game play or two occasionally.

Mythe is a game of risk and reward. Push your luck and adventure far, but you could also just as easily end your turn with a poor selection of a card from an opponent. Since player’s “skunk” themselves, there is never a feeling of being unfairly matched during the game. Indeed, players have a great deal of choice and that is very empowering. What choices the players make with that power is up to them and will lead to their victory or certain defeat. I really liked this and found it to be a subtle reminder to players that risk need not be taken blindly. A lot of information is given to the player, just not clear information. What makes a player finally end their turn is not what the cards are suggesting, but what a player is feeling. You can’t help but feel you are really pushing the limits when you have 5 Adventure cards in play. Pulling one more Adventure card feels a little like swimming with sharks. Sure, you could do it, but the odds of getting bit are pretty huge.

There was some debate on if this game required memory. The only thing to remember during game play is where cards are given during the end of a player’s turn. However, since cards have a great deal of turnover during the game, it became a worthless exercise to attempt to keep in memory where cards were. Not totally, as one could load an opponent up with a lot of bad cards, but the overall game play did not require a lot of memory use.

I enjoyed the game and encourage you to try it. It’s light but fun. The game has enough spice to keep you interested and is fast enough to ensure you are never bored. While it might not seem like an adventure each time you play, you will quickly learn that obtaining the cheese is not a simple task.