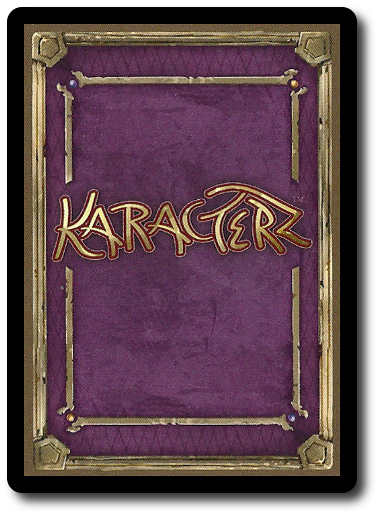 French educator, historian, and founder of the International Olympic Committee, Pierre de Coubertin, said “The important thing in life is not victory but combat; it is not to have vanquished but to have fought well.” For those who have dedicated themselves to learning a martial art form or perfecting the use of a weapon, the ultimate goal is to use the skills they have learned to a high degree of perfection. In this game, you will build your own warrior and strive to perfect the art of war.

Karacterz, designed and self-published by Matt Hall, is comprised of 6 Core cards, 16 “Purple Cards”, 36 Magic cards, 36 Agility cards, 36 Physical cards, 36 Support cards, and 12 Class cards. Not included with the game, but necessary to play, is some sort of method of keeping track of individual damage inflicted. The game boasts 77 unique card artwork from 63 artists hailing from 23 countries. While impressive, the illustrations give the game an unbalanced visual presentation. Some artwork looks to be Japanese anime in origin, while others are much more traditional fantasy artwork.

To set up the game, first separate each card into a separate pile by using the characters and words on the cards’ backs. When done, there will be seven piles of cards (Core, Class, Magic, Agility, Physical, Support, and the rest that are commonly referred to as the “Purple cards”).

Second, place the Core and Class card piles face-up. From the Purple cards, set aside the Phase 1, Phase 2, and the Symbol Guide/Class Requirement cards. These cards are meant for reference.

Fourth, have each player select one Core card at random or by choice. Any Core cards not selected are placed back in the box.

Fifth, use tokens, dice, or some other small item to track damage for each player. These game components are not included.

Each of the cards in the game has a special purpose. They are summarized here.

The Core cards represent the very first building block on which each character is built. In this case, the sex of the character (male or female). In addition, the Core card gives the player a bonus in the areas of Magic, Agility, or Physical. 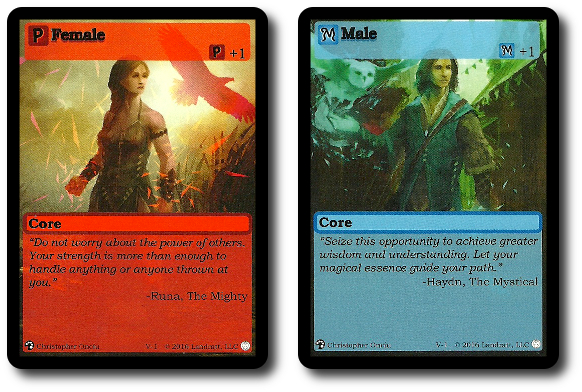 The Class cards represent the area of unique study and discipline the character has taken as their life’s work. These classes are attuned to Magic, Ability, and Physical, making them easy to match or mix with the Core cards. 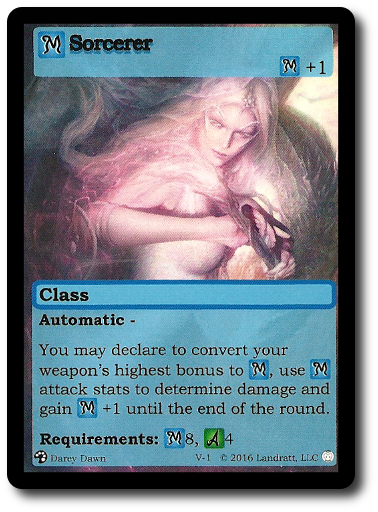 Magic cards represent the mystical and supernatural abilities and weapons that can be used by characters in combat. 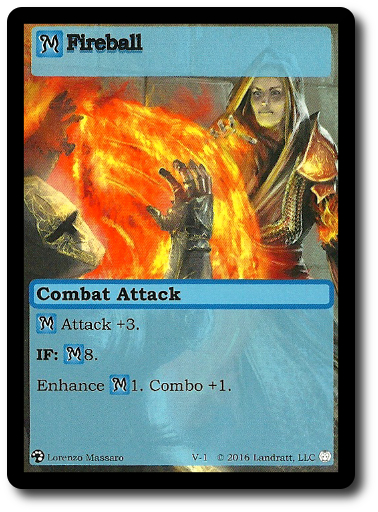 Agility cards focus on precision and timing, making it easier for characters to hit their opponent and to dodge attacks. 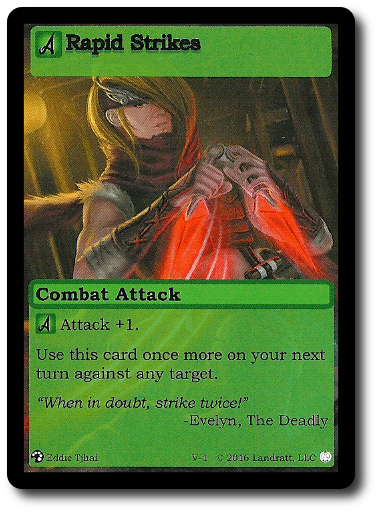 Physical cards are similar to Agility cards but focus more on the use of weapons, allowing characters to inflict powerful blows or block strong attacks. 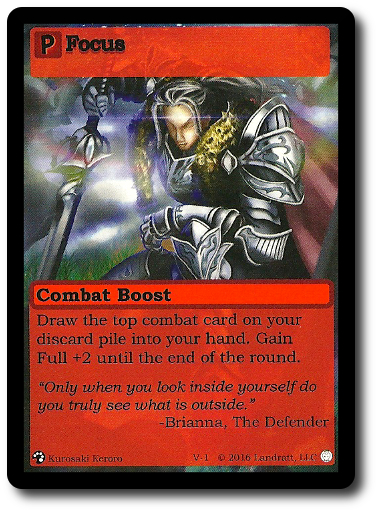 Support cards include magical potions and areas of study, as well as bonuses to a character’s Physical, Agility, and Magic abilities. 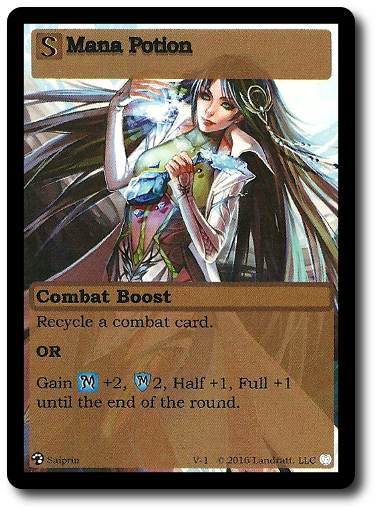 These cards used both for reference and for actions, allowing the player to announce their attacks and blocks.

Karacterz is played in phases, turns, and rounds. Each of the phases is summarized here.

Each player now completes the following actions based on the cards they drew.

The second phase of the game tests how well each player has built their character given the cards they drew. Combat now ensues.

All players draw four cards from their Combat deck (created during Phase One of the game) and immediately resolve any “Automatic” abilities.

All players now play a card as their action for their turn. They also select a target (opponent player). Actions include attacking or blocking.

Some cards allow the player to gain a temporary Combat, Half, or Full Boost. These can be played now face-up in front of the player.

Combat is now repeated until all the players have exhausted their characters by playing all their cards.

A New Round and End of Game

A new round begins after the end of Phase Two. The game ends when all the players have played their Combat cards.

The winner of the game is the player who has the least amount of damage.

To learn more about Karacterz, visit the game’s website.

The Child Geeks really enjoyed the game’s concept and how easy it was to create, mix, match, and mold their character into the hero (or villain) they wanted. To quote one Child Geek, “I really like how easy the game system is. With only four different areas to focus on, you can have a lot of fun creating unique heroes without feeling like you have to work very hard.” Another Child Geek said, “The game is easy, but a bit too long for me to finish. I wish it was only about three rounds of combat.” The game’s length did keep many of our Child Geeks, especially the younger ones, from finishing a complete game in a single session. Luckily, Karacterz is easy to pause and take a break from, allowing the younger Child Geeks to complete the games during two or more days. When the games were done, the Child Geeks gave Karacterz two thumbs way up.

The Parent Geeks enjoyed playing the game with their Child Geeks and were grateful that the game was easy to set aside for breaks. According to one Parent Geek, “I have a hard enough time keeping my kids occupied and on task for 30 minutes. A game that takes two hours to finish is simply out of the question, but this game is easy to pause and restart.” But with their peers, Karacterz didn’t pack the same punch. As one Parent Geek put it, “The game is OK for the first 30 or so minutes and then starts to feel really repetitive. And if you don’t have the right cards, you just get punched in the face repeatedly making it uninteresting and not very entertaining.” Seldom did players have cards that did not benefit them, but it’s worth noting that how well a player does in combat it based on how the player sets their characters up. Poor character creation will result in poor combat. When it came time to vote, the Parent Geeks gave Karacterz a mixed endorsement.

The Gamer Geeks liked the game’s concept and that’s about it. They found the game to be too long for what it provided and too repetitive. According to one Gamer Geek, “The game gets old fast and you feel like you are doing the same actions over and over again, but with new cards. I didn’t feel like the game had much depth and was purely focused on just numbers.” Another Gamer Geek said, “The game is too damn long. Way longer than it needs to be and that’s the major problem with it. It doesn’t grab your interest strongly enough or hold it long enough.” Needless to say, when it came time to vote, the Gamer Geeks rejected Karacterz, finding it to be a game they would rather not play.

The games biggest (and I’d argue only) downfall is the time it takes to play it. With the average game clocking in around 120 minutes (and a typical game taking 150 or more minutes), Karacterz overstayed its welcome and started to drag as a result. This was noted by all three of our groups, but only the Gamer Geeks found it to be an unforgivable flaw. The Parent Geeks and Child Geeks felt they were not up to playing the full game, but did not count that as a game fault. That is to say, lack of time on their part did not negatively reflect on the game as a whole.

As for the game play, it can feel repetitive when you are over an hour into it. The game attempts to reduce this by offering many random cards for the players to review and use. That’s good, but not if you’ve played the game a lot. Since the cards never change, all that remains that keeps players guessing is the order in which the cards are given. Even then, the game (and rightly so) gives the players a lot of control to decide on what to do with the cards. A player who is familiar with the game will quickly discard for Support cards and not even think twice about it. That’s not a bad thing in my book, but when players stop having to think about the game, they tend to stop being interested, as well.

I found Karacterz to be entertaining, but I did feel like it was a bit too long. I would have preferred the game take an hour or less, the combat was tighter, and the game’s level of energy was larger. What we currently have here is a well-designed game that plays well enough, but could use some streamlining and tightening. A quick house rule or two will reduce the time it takes to play the game without changing the game’s overall rules of play. I found games with a set number of damage points to determine victory works best.

If you enjoy fighting games and the ability to craft warriors to fight in your name and deck building, you’ll enjoy Karacterz. Its complexity lies in challenging the player to consider long-term objectives while taking short-term risks. An interesting mix of brutal combat and thoughtful character evolution. Do give it a try when time permits.