The Lady and the Tiger Game Review (prepublished version) 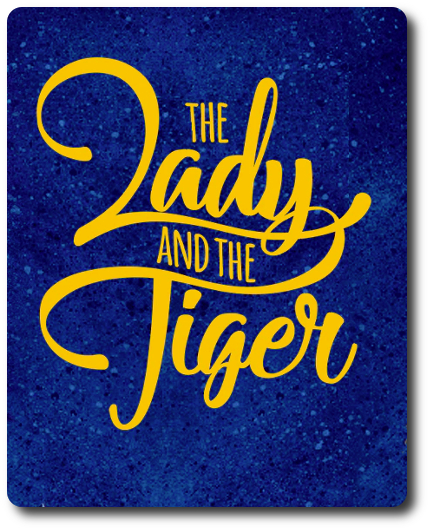 The Lady and the Tiger is an old story that touches on the subjects of life, death, love, jealousy, fate, and fortune. It’s a wonderful tale to discuss and debate, as the outcome of the story is never told. It’s up to the reader to interpret and determine their own ending. In this game, players will need to do the same. Pick a door and face your fate.

The Lady and the Tiger, designed by Peter C. Hayward and to be published by Blue Beard Entertainment, will reportedly be comprised of 4 Door cards (Red Lady, Red Tiger, Blue Lady, Blue Tiger), 14 Clue cards (3x Red Lady, 3x Red Tiger, 3x Blue Lady, 3x Blue Tiger, Blue or Red, Lady or Tiger), 1 double-sided reference sheet, and a small number of score tokens. As this is a review of a prepublished game, I cannot comment on the game component quality.

To set up the game, first shuffle the Door cards and randomly deal one to each player, face-down. Players should look at these cards but keep them hidden from opponents. This card is the player’s “identity”. Any Door cards not dealt should be placed face-down and to one side of the game playing area. These set-aside Door cards are out of the game temporarily.

Second, shuffle the Clue cards to form a single deck. Draw the first three Clue cards and place them face-up in the middle of the playing area. This area is referred to as the “display”.

Fourth set the score tokens to one side of the game playing area and within easy reach.

That’s it for game set up. Determine who will be the first player (referred to as the “Collector”) and begin.

A Beauty and a Man-Eating Beast

The Lady and the Tiger is played in rounds and turns. Players take alternate turns starting with the Collector and then the Guesser (term given to the other player in the game), and so on. A single game round is summarized here.

The first thing the Collector does on their turn is select any of the face-up cards in the display and places it face-up in front of them. A new Clue card is then drawn and added to the display to replace the taken card. The goal here for the Collector is to collect sets of 4 cards that share at least one trait as their identity.

For example, if the player has a “Red Tiger” identity, a set is any of the following as long as it matches the traits “red” or “tiger”: 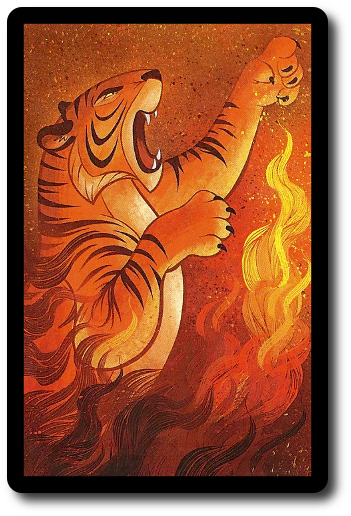 It’s VERY important to note that the Collector need not select a card that matches their traits each and every time. In fact, it’s a very good idea to mix and match, thus keeping the Guesser guessing.

The first thing the Guesser does on their turn is select any of the face-up cards in the display and places it face-up next to the draw deck. Then the Guesser may guess the Collector’s traits if they think they know it. Guessing is always optional.

A guess must include any of the following:

This ends a round of game play. The next round now begins.

The round ends when the last card in the deck is drawn (earning the Guesser 2 score tokens), the Collector has a complete set, or the Guesser correctly identifies the Collector. Points are then determined for the round by counting the total number of score tokens collected by each player.

A new round can then being unless a player has earned 10 or more points in total. If so, that player is the winner of the game.

To learn more about The Lady and the Tiger, visit the game’s website.

The Child Geeks had a fun time with this game. They had no issues understanding the game’s concept and their guesses were both intelligent and educated. Likewise, the Collector role was well done, with the player mixing and matching their selected cards to throw off the Guesser. According to one Child Geek, “I like the game. It makes you think and that’s fun.” Another Child Geek said, “I think the best role is the Collector. You get to try to trick the other player, but you have to do it quickly because there aren’t that many cards.” This Child Geek brings up a good point. The Collector must keep their traits hidden for as long as possible, but not so long as to not collect a set. Of course, by collecting a set, they inform the Guesser. When all the doors were opened, tigers faced, and ladies wooed, the Child Geeks voted to approve the game

The Parent Geeks were also charmed by The Lady and the Tiger. According to one Parent Geek, “A smart little game. I particularly like how the information unfolds in front of you, challenging you to take calculated risks.” As the game unfolds, more and more information is given, but the Guessers don’t ever really know if the information they are being shown is true or false, purposely misleading or subtly informative. It’s a conundrum. As one Parent Geek put it, “The challenge is both in reading the cards and reading your opponent. Bluffing is essential for both sides.” Correct! As the Guesser, the player needs to determine traits by deciphering clues. At the same time, the Collector must hide themselves in plain sight, smoke screening the truth in a fog of ambiguous cards, but each card drawn sheds just a bit more light on the facts. When the games were over, the Parent Geeks approved The Lady and the Tiger.

The Gamer Geeks were neither as thrilled as the Child Geeks, nor were they as enamored as the Parent Geeks. They were, however, pleased. According to one Gamer Geek, “This is a great example of a quick game of deduction and bluffing that can be played anywhere, anytime, and with anyone. I find it to be a perfect candidate for quick fillers or pub gaming.” Another Gamer Geek said, “Conceptually, I find it to be almost too simple in its execution. I mean, let’s be honest, we are just picking cards and making guesses here. But that’s just the surface. The real game is matching wits with your opponent and that is a lot of fun.” It only took a few games for the Gamer Geeks to agree that they found The Lady and the Tiger to be a fun distraction and one they would gladly play at their elitists’ tables or favorite restaurant tables.

The Lady and the Tiger excels at being easy to approach and that was almost its downfall. The game looks exceedingly simple at a glance, little more than a game of memory and random selection. Not much fun there. But have a seat and play a game (which takes less than 10 minutes in most cases) and you quickly realize that the real challenge is in the bluffing and deduction that must happen quickly and accurately. There is no time for second guessing and each card draw is informative. It’s a game that challenges the Collector to be as subtle as possible and the Guesser to be laser-focused. It can be, oddly enough, slightly stressful.

My favorite aspect of the game is its ease of game play. I can place the deck of cards down, play about 10 games, and then my food arrives at the restaurant. Better yet, I’m waiting for more friends to arrive to play games and I want an easy way to entertain myself and the other players waiting. In both cases, The Lady and the Tiger succeeds. It’s a game that both challenges and entertains in equal measure, but never to a degree where the players are all consumed by the game play, but nor are they left disengaged or uninterested. It’s the perfect mix of casual gaming and deep thought. Do try The Lady and the Tiger when time permits. This is one door of opportunity you will want to open.