The Princess Bride: As You Wish Game Review 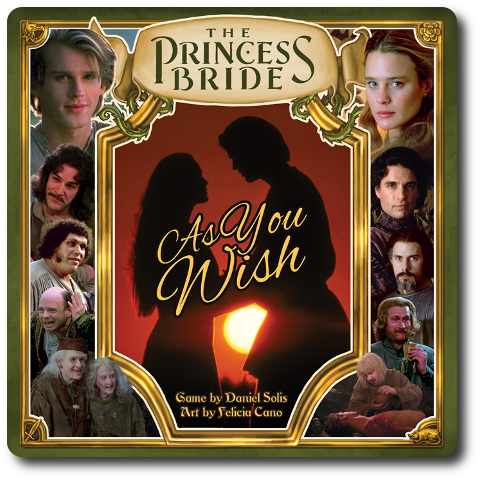 American science fiction writer, Frank Herbert, said “If wishes were fishes, we’d all cast nets.” Who among us hasn’t wished to be bigger, faster, richer, or be granted more than what we think we have? Wishing is the act of longing and in this game, players will need to decide if what they long for is worth the risk of pursuing.

The Princess Bride: As You Wish, designed by Daniel Solis and published by Game Salute, is comprised of of 75 Quest cards and 10 Character cards. Each card depicts a scene from the movie The Princess Bride, along with many popular quotes from the characters. The cards are as thick and as durable as your standard playing card.

Farm Boy, Fetch Me That Game?

To set up the game, first separate the Quest cards from the Character cards. Shuffle both piles separately and place face-down.

Third, deal 1 Quest card to each player. These Quest cards are placed face-up and in front of their owning player. Place the remaining Quest cards face-down in the middle of the playing area and within easy reach of all the players.

That’s it for game set up. The player who shuffled the cards is the First Player for the first round. 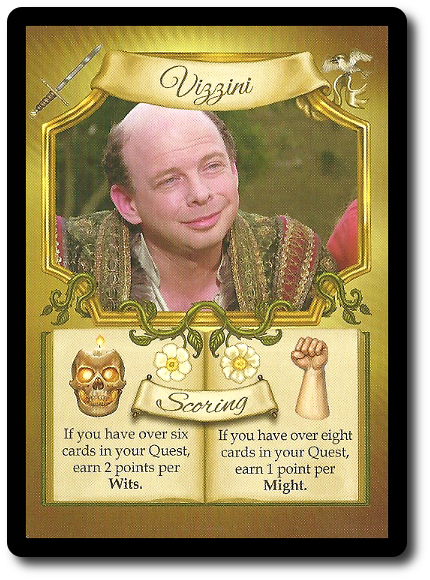 The ways of scoring describes the number of Quest cards the player must have and the number of specific icons. In total, there are 5 different icons to be collected, but only those listed on the player’s Character card will score points. 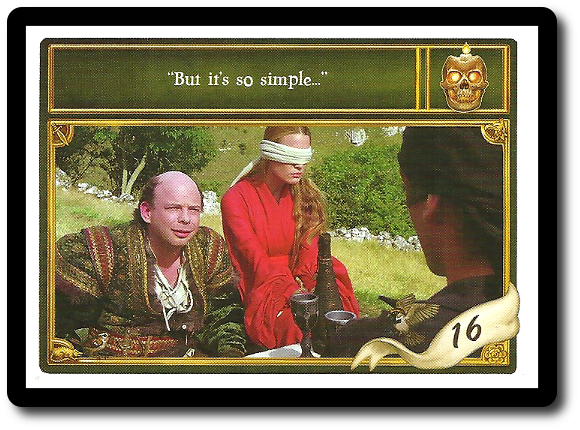 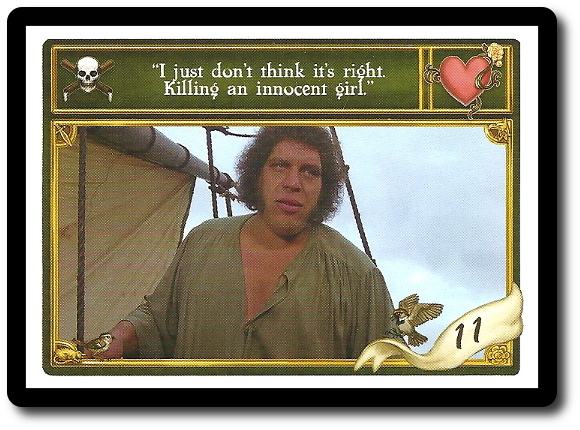 We Are But Poor Circus Performers On A Quest

The Princess Bride: As You Wish is played in rounds and turns for a total of 9 rounds of game play. Players can always determine how many rounds are left by counting the number of Quest cards in their Quest card column. A typical game round is summarized here.

Step 1: Prepare for the Quest!

The player with the next lowest Quest card value now takes their turn, repeating the above actions.

This ends the round. A new round now beings as noted above.

The End of the Quest

The game continues until at least 1 player has 9 Quest cards in their Quest card column at the end of the round. The game is now over and points are scored. Players review their Character cards and tally up their points based on the points earned for quests completed. 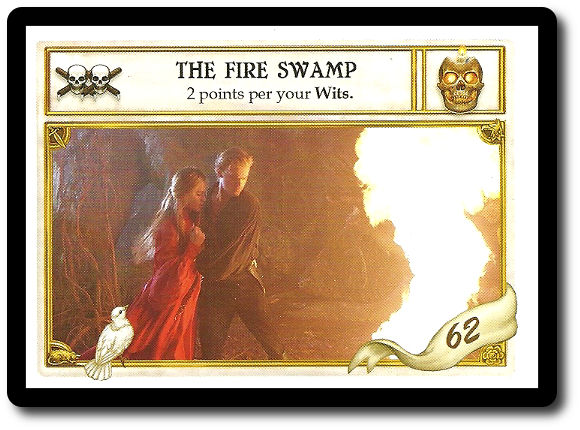 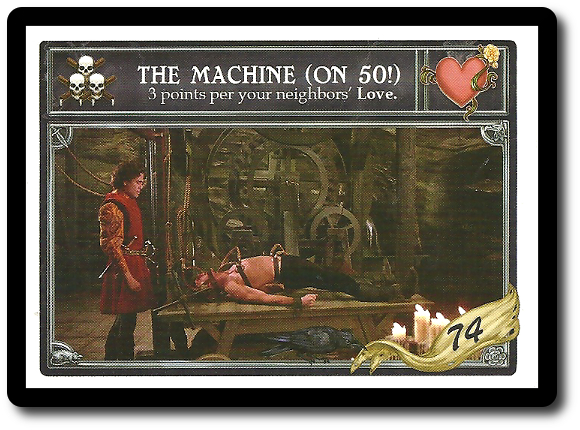 The player with the most points wins the game, the girl, the guy, or whatever they wish…

To learn more about The Princess Bride: As You Wish, visit the game’s web page.

The Child Geeks really enjoyed the game and found it to be a fast and fun time. According to one Child Geek, “I really like this game. The hardest part is guessing if there is a better hidden Quest card than the ones showing.” Another Child Geek said, “I just think it’s fun to collect the cards and to score points off the other players. I know they hate that.” To which the Child Geek started giggling in a cute and somewhat evil fashion. Overall, the game both challenged and engaged the Child Geeks, keeping their focus both on the cards to collect and the cards to be scored. When all the quests were completed, regardless of their outcome, the Child Geeks voted to approve the game. 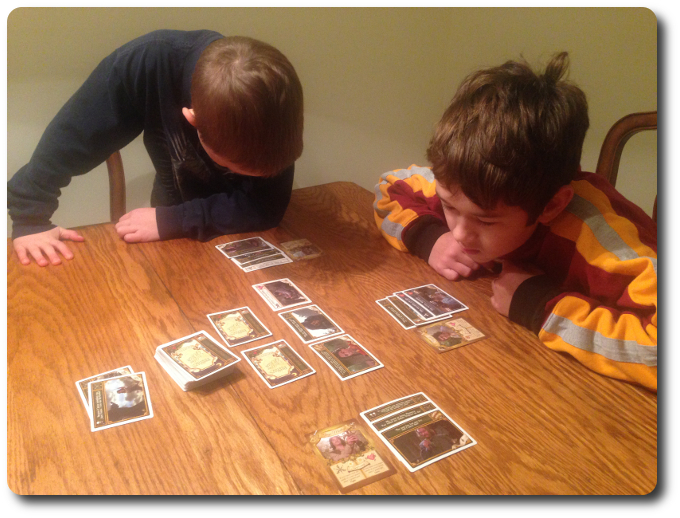 Time to quest! But which quest should be taken? A quick inspection of cards reveals clues…

The Parent Geeks were also delighted with the game, for the most part. The non-gamers and casual players found The Princess Bride: As You Wish to be a light game with casual play, with just enough challenging logical and critical thinking to keep the game interesting. More to the point, difficult to win, which brought forth some very interesting levels of competitiveness not often observed from the non-gamer crowd. According to one non-gamer Parent Geek, “The most frustrating part of this game is being able to look over to the other players’ cards and being able to quickly see how far behind you are.” The veteran Parent Geeks who often seek more complicated games found The Princess Bride: As You Wish to be enjoyable, but not overly engaging. According to one such Parent Geek, “The game is good and even great for my family, but I found it to be little more than collecting a card each round and adding it to a pile of other cards. I was sort of bored.” When the games were over and the votes counted, the majority of Parent Geeks voted to approve The Princess Bride: As You Wish.

The Gamer Geeks were disappointed with the game on several levels. First, they found the game’s theme to be unnecessary and overly pasted on. According to one Gamer Geek, “I don’t mind games with pasted on themes, but the game play has absolutely nothing to do with anything about the movie or the characters.” Another aspect of the game they did not care for was already mentioned by a Parent Geek. As one Gamer Geek put it, “The game is nothing more and nothing less than deciding what card to take, place it in your stack, and then twiddle your thumbs.” The Gamer Geeks did acknowledge that the way a player scored was important, but they were quick to note that it did little to add anything to the game other than provide the player direction. According to one Gamer Geek, “I feel like this game is on rails and it’s not a great trip.” The Gamer Geeks voted to reject the game.

The Princess Bride: As You Wish is not an overly complicated game and I think it’s best with the Child Geek and Parent Geeks crowds. Players who hunger for deeper experiences with meatier game play will find The Princess Bride: As You Wish to be disappointing. The game itself, however, is most certainly solid enough to withstand any negativism thrown at it. The decisions to be made are not difficult, but each is very important. This really is a game about stacking points, but along the way, players can lose them, multiply them, and even benefit from their opponents’ hard work. But only if they think through what cards they are collecting.

I agree with the Gamer Geeks that The Princess Bride: As You Wish is not the kind of game I would want to bring to a gathering of gaming elitists, but nor is this a game I would turn down. It has its charm and it always kept me involved enough to feel that the game was worth my time. I rather liked it and have always found it to be a game that was enjoyed if not by all, then most definitely by the majority. Do try The Princess Bride: As You Wish with your friends and family. Those looking for a game rich with theme and deep in game play need to keep wishing for something a bit more…

2 Responses to The Princess Bride: As You Wish Game Review