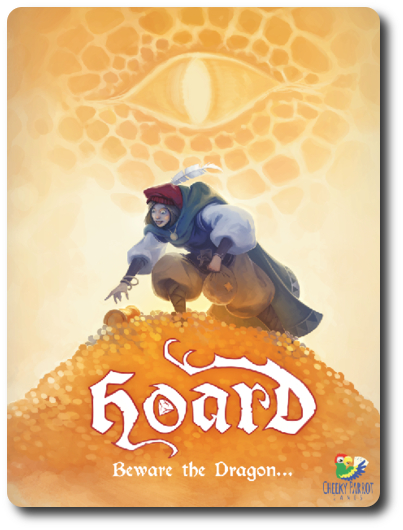 Of all the ways to make a quick coin or two, stealing from a dragon is not considered “smart”. But big risks mean big rewards and nothing is more profitable or dangerous than stealing for a gold-loving dragon. You and a number of other thieves have wandered into the dragon’s lair to take its loot. Little did you know that the dragon you are stealing from is still at home.

Hoard, designed by Tim Kings-Lynne, Julia Schiller and published by Cheeky Parrot Games, is comprised of 3 Dragon boards, 42 Treasure cards, 8 Dragon Action cards, 3 Sword cards, 3 Shield cards, 6 Player Aid cards, 6 Player pawns, a small number of victory point tokens (in different values), 1 custom six-sided die, and 1 Jester Cap token. The cards are as thick and as durable as your standard playing card. The Player pawns are cutout cartoon characters taken right out of your favorite high-fantasy world, each placed in a standee when in use. A nice touch.

To set up the game, first take the three Dragon boards and place them, blue-side face-up, in a row so they create the image of a sleeping dragon.

Third, deal 5 cards to each player, face-down. This is the player’s starting hand. They should keep their cards hidden until played. Place the remaining cards face-down and to the side of the game playing area. This is the draw deck.

Third, have each player select 1 Player pawn, attach a standee at its base, and then place the pawn on any unoccupied treasure cards that surround the Dragon boards. The player can then secretly look at that card and then places it back with their Player pawn placed on top.

Hoard is played in rounds and turns with no set number of rounds per game. After the first round, the player with the lowest score is always the first player of the new round. A player can take one of four actions on their turn which are summarized here.

To explore the dragon’s lair, the player takes the custom six-sided die and rolls it. If the rolled number value is between one and five, the player moves their Player pawn that many cards (or spaces) in any direction around the slumbering dragon. The player cannot change the direction in which they are traveling once they start. If the player rolls the icon of thief running, they can either stay at their current location or move anywhere from one to five cards in any direction.

Once the Player pawn movement is completed, the player takes a peek at the card its pawn is on, being careful not to reveal it to any opponents accidentally. If the card is one the player wants to keep, they may place it in their hand now and draw a new card to replace it from the draw deck or replace the card from any card already in their hand. If the card is one the player does not want to keep, they place it back and draw a card from the draw deck to keep instead.

To keep the stolen treasure, securing it for a quick getaway, the player must place them face-up in front of them in sets. A set is any grouping of 3 cards or more with the same icon. If a group already has 3 or more cards, two or more of the same cards can be added on the player’s turn. This is referred to as “extending the set”.

The player can also play a Shield or Crown card. Playing a Shield card allows the player to steal any in play Sword card that is not already paired with a Shield card (thus creating a pair). Placing a Crown card down will award player points and they also get to give the Jester Cap token to one opponent (which will also score points). 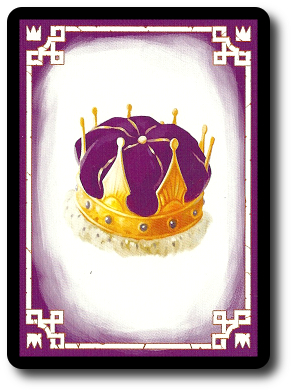 Mess with the Dragon

Messing with sleeping dragons in not a good in idea in general, but in this game, it’s a tactical way to interrupt other opponents and control the round duration. This is done by playing Dragon Action cards. Dragon Action cards either allow you to make noise (wake up the dragon) or make no noise (let the dragon fall back to sleep). When noise is made, one of the three Dragon boards are flipped from the blue-side to the colored-side, signifying that the dragon is stirring. If noise is reduced, just the opposite occurs. A colored-side is flipped to the blue-side, signifying the dragon is falling back to sleep. 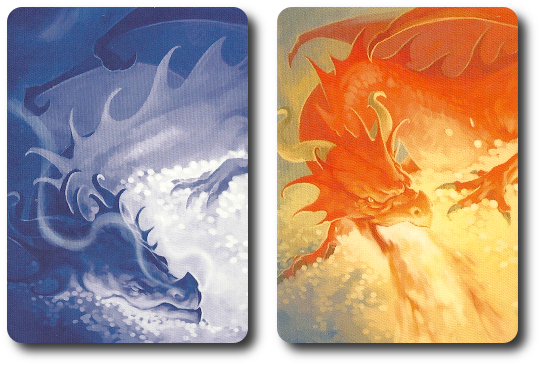 A Sword card allows the player to “attack” an opponent. 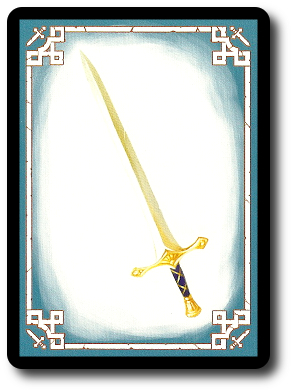 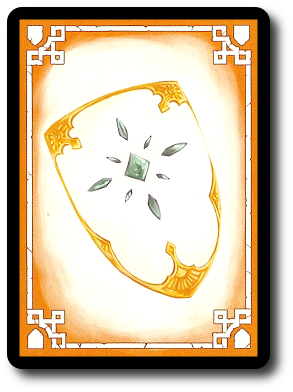 The Cloak card negates other cards after they have been played. For example, it can be used to cover one Dragon Action card, ruining a possible set. 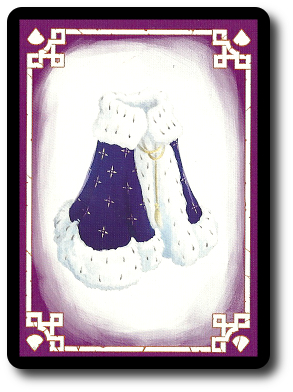 Ending the Round and Scoring

The round ends when the dragon is fully awoken, the last card from the draw deck is taken, or any player begins their turn with no cards in their hand. Each player’s score is now calculated. Points are earned from having sets of cards (treasure, Dragon Actions, equipment, etc.) and Jester Caps. Points are reduced for cards not yet secured that are still left in the player’s hand.

The game continues with a initial set up and another round of game play. The game ends when a player earns 5 or more victory points at the end of the round.

To learn more about Hoard, visit the game’s website.

The Child Geeks enjoyed their time with Hoard, finding it to be a game they quickly could grasp and play. According to one Child Geek, “I thought the game was easy to learn and a lot of fun to play. I like waking the dragon the best.” Another Child Geek said, “The longer you can keep the dragon asleep, the larger your sets. But that’s a problem. Because if you let players keep collecting treasure, it is harder and harder to win the round.” This Child Geeks brings up an excellent point. The longer the dragon sleeps, the more treasure all the players can collect. This may seem like a great thing until you realize that victory only goes to the players who collect the most. If everyone is allowed the freedom to collect as much as they want, the chances of obtaining a victory point are reduced due to the number of other players who are doing the same thing. This is why waking the dragon is a great way to end the round when you think you have the advantage. A fact the Child Geeks quickly learned and enjoyed. All the Child Geeks voted to approve Hoard.

The Parent Geeks also enjoyed the game, both with their families and with their friends. According to one Parent Geek, “It’s hard to find fantasy-themed games that are easy enough to teach non-gamers and yet still thematic enough to keep everyone involved. I think this game did a great job of capturing the game’s story and presenting it in a  way that is easy for players to quickly grasp.” Another Parent Geek said, “Easy to teach, but not as easy as I thought it would be to play. I was skunked a few times with the points and I see now that I have to play much more aggressively.” The Parent Geeks were delighted that the game allowed for non-combative exploration and in-your-face card playing, but the real goal is to find that spot in the middle that allows the player to do both. That spot shifts during the game and keeps the players on their toes. All the Parent Geeks voted to approve Hoard.

The Gamer Geeks liked the game’s components and it’s idea, but not its execution. According to one Gamer Geek, “Here is my biggest problem with the game. Players can artificially lengthen and shorten the round’s length. For strategic and tactical reasons, I think that is great. What I don’t like is that my efforts to make the game go longer or shorter can very quickly be trumped. This makes me personally feel that the game is not designed that well.” Another Gamer Geek said, “I like everything about it except the ability to put the dragon back to sleep. I think it should be slowly awakened, but never allowed to fall back to sleep.” Lack of tension was another comment I heard a few times and the game’s general lack of depth. The end result was the Gamer Geeks rejecting Hoard.

One of my favorite aspects of the game turns out to be the very reason why the majority of Gamer Geeks rejected Hoard is the first place. I was a big fan of having the ability to control the dragon and by extension, the round. This made the game feel deeper, more tactical, and each turn more strategic. If I just focused on collecting sets, I would be blind to the fact that the round was ending sooner than I would hope. Likewise, if I just focused on the dragon, I wouldn’t have time to collect my sets. It created a balancing act that was one part stepping softly with a sense of urgency and making aggressive plays to quicken the game’s pace.

Do play this entertaining set-collecting card game when time allows. It challenges players to explore, take risks, and take action. All the while, the dragon sleeps a lot lighter than any player realizes. Make the wrong move or take just a bit too much risk, and that giant fire-breathing lizard will roar to life. Of course, without bravery and risk, how can you ever expect to be a very rich hero?