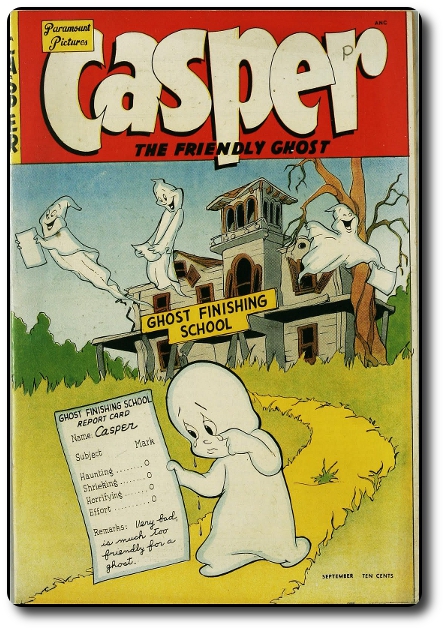 A lot of emphasis is put on the geek skill of reading. First off, you have to be able to read and understand a game’s rule book. Second, and just as important, you need to be able to read any text that is included on game components such as cards. Clearly, the ability to read is not only required, but essential if you want to play games, not to mention get anywhere in life.

In our family, reading is not only seen as an important skill (be it geek or otherwise), but also a pleasurable pastime. My wife and I have read to our little geeks as soon as they were born. Sometimes it was Newsweek, sometimes it was a romping story about a puppy who gets into mischief. The focus was always on interacting with our children, making the act of reading something that was a sharing and enjoyable experience.

This was not lost on my little geeks and they continue to enjoy having stories read to them, looking at books on their own, and in my 7-year-old’s case, reading random street signs and telling the family all about them. I cannot even begin to tell you how many times I have been told that a certain exit on the road is so many miles away. My 7-year-old has turned into a living GPS.

While reading books is always a good thing, my family does not use them exclusively. Magazines, the newspaper, and comics are also provided to our little geeks and highly encouraged as a “good thing to read”. Newspapers and magazine provide my little geeks with wonderful short stories, encapsulating a lot of information in only a few pages. Comics are pretty much a given, as I love them and so do my little geeks.

Yes, comics. For many, the word “comic book” conjures images of overweight men in their 30’s living in basement apartments and dingy backroom comic book stores. Oh, how I feel for those individuals, for they are missing out on so much. Comic books are a fantastic work that mixes wonderful storytelling and illustrations to create a unique offering that not only makes reading fun, but also exciting.

And, yes, there are 30-somethings who live in basements, overweight, and love comics. They are also really nice people.

I introduced comics to my little geeks at a very early age. As I read the comics to them, I would point at each illustration so my little geeks could follow along. The story unfolded before their eyes and became bigger. Now they could visualize what I was saying using the illustrations and reinforce their word association.

I have my own collection of comics (I’m a huge fan of Hellboy) and I get as many comics from the library as I can. My little geeks sit in my lap and read them with me, and when I’m not around, read them themselves. Remember, the goal is to get your children to read, enjoy reading, and strengthen their reading skills. What does it matter if what they are reading is about space monsters attacking Superman or a tenacious little steam engine?

When I was offered a chance to review some of KiZoic‘s latest releases, a comic book retailer that focuses on offering family and child friendly comic books, I jumped at the chance. I made it a point to keep this secret as I wanted to surprise my little geeks with new comics to read, some of which they had never seen before! When the comics arrived, I was overjoyed to share them and share them I did.

What came to my door were five excellent comics, all suitable for my kids, colorful, and most importantly, entertaining. I read each one through to get a good idea about the stories and the writing. I was amused by them, which means the comics were well written or I am easily entertained. Probably both. Here’s what I got. 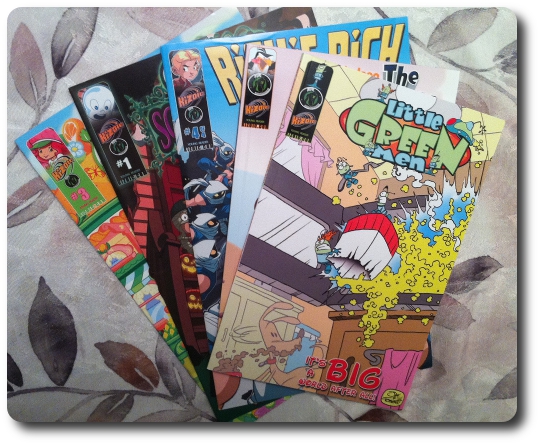 A story about three little aliens who come to Earth. The problem is that they are little. Really little. Like only an inch tall little. The story follows their intergalactic struggle to take over our planet, one small bit at a time. This comic was the most complicated of the bunch with smaller print, more words, and much busier illustrations.

The Penguins of Madagascar

Based off the animated movie, Madagascar, the comic continues the story with the penguins. If you are not familiar with the movie, the penguins are elite soldiers, highly trained, and always looking for their next mission. Of course, hilarity ensues when they go on their missions because, after all, they are penguins. This comic was my 4-year-old’s favorite.

Casper the friendly ghost is no stranger to many, having been on Saturday morning cartoons for years as well as comics, and movies. Casper’s newest comic is all about his adventures in a private school for ghouls and ghosts, monsters and monstrosities, who all need to get their education on. This comic was my 7-year-old’s favorite and the one he could most relate to, being in first grade.

The richest boy in the world with a penchant for adventure is at it again. This time, Richie goes in search of the mysterious Yeti and takes his loyal companions with him. Speaking of companions, Richie’s butler and robot maid have been seriously upgraded. His butler now looks like an action hero and his robot maid is now a svelte fem-bot who packs enough gadgets to make a Swiss Army Knife jealous as all get out.

Clearly not my little geek’s favorite, but it was looked at. For those of you with daughters and granddaughters, you should know that being a “geek” is gender neutral. Boys, girls, men and women can all share in and enjoy comic books. There are stories for everyone’s interest, be it mutants with amazing powers or girls named after desserts. Honesty, I have no idea what Strawberry Shortcake is about or why all her friends are named after fattening foods. I’ll have to ask my niece all about it the next time I see her.

Regardless of their story, subject matter, or length, all the comics were eagerly looked at and read. Again, I cannot stress enough how important reading is! If you can get your little geeks interested in reading early, you will be doing them a tremendous favor. Their reading skills will be ahead of their class, their motivation to learn will increase, and their confidence will be off the scale. Plus, you and your little geeks get to explore new and interesting stories together where the characters are dynamic and the plot lines can be exceptionally complicated and rich. I’ve got nothing against Dr. Seuss, but give me a good X-Men comic any day! One fish, two fish? No way! Eye lasers for the win! 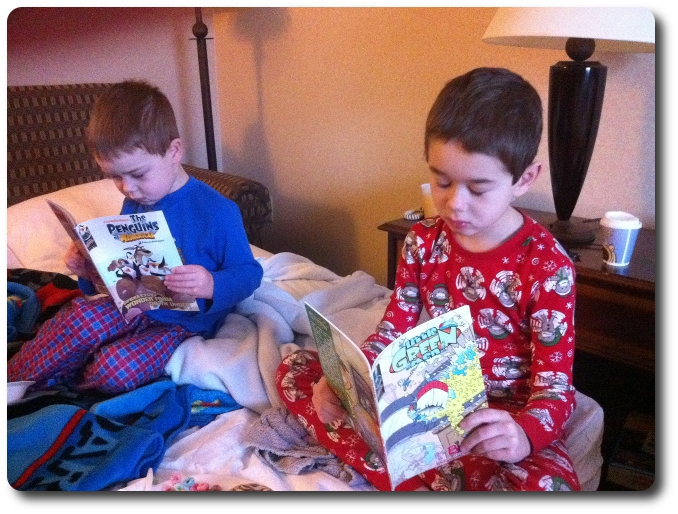 Reason #234 to teach reading as early as possible: quiet time

If you are interested in introducing comics to your little geeks, I highly encourage you to visit your local library. Odds are they have a great collection of comics you can get your hands on for free! You can also visit your local comic book store and ask for the “cheap comics” which will be around $0.05 to $0.10 per issue. There is also the yearly Free Comic Book Day event, which you should most certainly attend. Last, but certainly not least, you can always order comics from online comic book stores like KiZoic.

If you are new to the world of comics, a quick word of caution. The subject matter covered in comics ranges from kid appropriate to adult only. A quick look through the comic will help you determine if it is the right comic for you. You will also find that most comic book stores have helpful staff that are more than happy to assist you in finding a comic that is right for you. Don’t be afraid to ask and don’t be afraid to explore. The world of comic books can be daunting at first, but I do believe you will find it easy to navigate once you get your feet wet.

These comics were given to Father Geek as a review copy. Father Geek was not paid, bribed, wined, dined, or threatened in vain hopes of influencing this review. Such is the statuesque and legendary integrity of Father Geek.