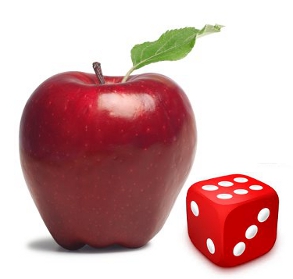 I am, and most likely always will be, a huge fan of gamification. The concept of building dynamic game mechanics into every day activities is a wonderful idea. Wonderful and cool, but hardly a radical one or even new. I remember my mom telling me when I was a kid to “make a game” out of cleaning my room, for example. I did, and by making the task of cleaning my room into a challenge, I was more focused on getting it done and more positive about the work I needed to complete. Of course, with computers in the classrooms, tablet computers in the home, and smartphones that make Albert Einstein look like a dunce, gamification has become much more interesting.

We have already seen gamification being used in applications that are meant to improve your ability to get things done. For example, I use the app Epic Win on my iPhone which not only helps me keep track of what I need to do, but also allows me to level up my skeleton warrior. Just recently, I downloaded ZOMBIES, RUN!, which makes the task of running a lot of fun. Well, “fun” if you think running for your life from a hoard of brain-eating undead is a good time, which I do. These are just two of many examples of games that mask the task, elevating an otherwise mundane and uninteresting activity into a game that is exciting and rewarding.

My little geeks play math and spelling games on my iPad and their Leapster on the weekends. They also play Mario Brothers and I am very proud to say, Final Fantasy, but these are always paired with education games that focus more on scholastics rather than fighting monsters and saving princesses. My kids greatly enjoy both and rightly so because they were designed from the ground up to be fun, challenging, and rewarding. The feeling of accomplishment they get when they beat a dragon or spell a word correctly is the same because the game dynamics built around the task is the same. Leveling up, becoming stronger and faster, is no longer reserved for super heroes and plumbers. Now everyone, including your little geek, can get in on that action, be it through an educational or action-packed video game.

I have recently stumbled upon a web site called DimensionU. This company has designed games that play like the popular puzzle and first-person shooter games we have today, but instead of just running around and going pew-pew with lasers, the games include math equations the player must get right in order to play the game well. If the player does do well, their points are saved and they have the ability to compete against other players around the nation. But perhaps the most ingenious part of DimensionU is also its most costly. DimensionU has a rewards system that gives real money, in the form of credit, to the player when they do well which allows them to buy prizes.

Again, there is nothing new here, but DimensionU has put a new twist on it by bundling these pieces together and pitching it to teachers and parents as an educational tool. Their product uses three fundamental elements. These are Play, Learn, and Earn.

DimensionU currently has two games for players. The first is titled Gadget Works, which is like Bejeweled, where the players attempt to line up colored object to create chains that “burst” and cause the pieces around them to fill in the missing spaces. The goal of the game is to score big points by “bursting” larger and larger chains. The second is a Meltdown, which is an “over the shoulder” first-person shooter. Both of these games play just like a video game with players scoring points, increased difficulty, and power-ups. I played the games, and unless I knew what was coming next, I wouldn’t have thought them to be anything other than just another video game for me to spend my time on.

While the players are engaged in the video game, before they can move through gates, complete missions, and advance, they must also solve mathematical equations. The difficulty of the equations is based on the player’s school grade level. Once the player solves the equation, the game continues. This makes learning math an essential part of the game, making it as important to know what 17×12 is as where the extra ammo pack can be found.

Many families reward their children for doing tasks around the house and earning good grades by offering them some sort of reward. Sometimes this is a new game, an allowance, or other neat “prizes”. These are placed in front of the children to act as a motivator and a defined goal to be achieved. I do this every night at my table by telling my little geeks that they can have dessert, but only after they finish their meal. The task of eating their dinner is now is a means to an end and they force their way through a task they might not otherwise consider completing. DimensionU takes this same concept and rewards players for doing well by offering them a chance to purchase prizes. This award feature does not come free, however, and is supported by credit card transactions that keep a balance made available to the player. The neat thing about the program is that it puts the responsibility of not only earning the prizes, but also selecting what the prize is in the  lap of the player. This extra level of responsibility is in many ways a reward in itself.

Giving It the Old College Try

I rather liked the idea of the gamification of mathematics, but wanted to see how much focus was put on the game versus the scholastics. There is a balance that must be maintained so the game provides fun but also education value. If it leans too much one way or the other, it will fail. I thought the best test would be to throw my oldest little geek on it. He plays video games fairly well and knows “fun” when he sees it. I created an account for him and turned him loose, watching his progress and seeing how the games played.

At first, he was rather gung-ho about it and was having a wonderful time, but he was annoyed by the math questions that came up. When I told him he had to answer the math questions in order to continue, he was rather put out by the entire game. I later learned this was based on two things. First, the lowest grade level available is 3rd grade. My 7-year-old is in 1st grade, meaning the math he had to solve was a good deal more involved than what he is used to. Second, the math questions interrupted his game experience. He wanted to shoot and collect things, not stop and solve math problems. 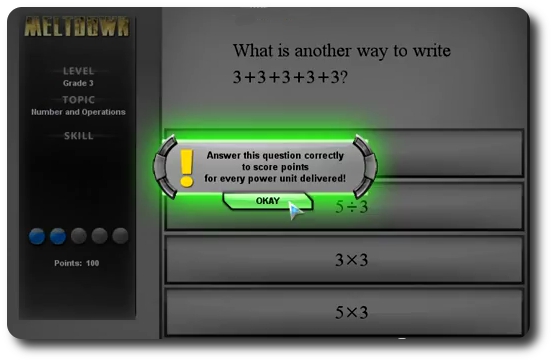 From what I observed, DimensionU was doing their best to blend the game with the math, but not doing as elegant a job of it as I had hopped. If you look at today’s video games, math is constantly used, but not presented in a way that breaks the flow of the game and stops the excitement. For example, you use math in Final Fantasy when you are determining which weapon is better to use and will do more damage. It is done in a logical and realistic way in the context of the game. That’s the kind of implementation that is missing. As it feels today, it is coming across as two different experiences. First the game and then the interrupting and mood killing math question. For little kids who are used to playing non-stop action games that only bring the excitement down when the game is either paused or off, this type of gear shifting won’t go over well.

Despite the fact that the games do not integrate their mathematical lessons as seamlessly as I or my little geek would have liked, they were still educational and entertaining. There is room for improvement and I hope the company spends more time blending the lessons into the game so it is indistinguishable from the game itself. If they can do that, DimensionU will be a masterpiece. Until then, I think it is nothing more than a useful tool, but no more so than what my little geeks are doing on their Leapsters and iPads, today. They are learning just as much and having a great time without the need for earning prizes using my credit card.

But this is a subjective statement based on my household. For some families, this might be exactly what they are looking for to help their little geek get serious about mathematics using a medium that is familiar and fun. Like all tools, they are only useful if they serve a purpose and assist in the completion of a task. If your little geek loves playing games and wants to strengthen their mathematical Kung-fu, DimensionU is certainly something you should look into. Check out their site and watch the video to learn more.

As for me and mine, I’ll stick to board games.

I participated in a campaign on behalf of Mom Central Consulting for DimensionU. I received a free trial of DimensionU to facilitate my review and a promotional item as a thank-you for participating.