Adventures in Scouting: Board Games 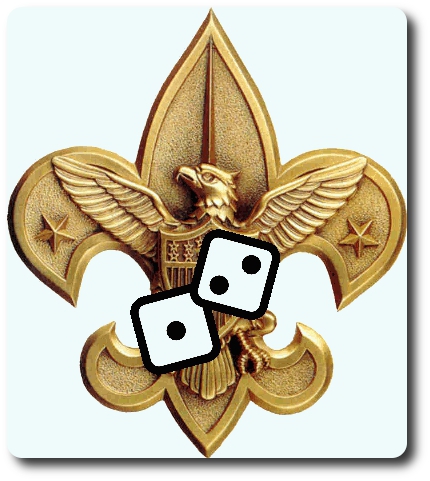 Last year, I wrote about our Scout Troop’s weekend in Angola, IN, on Zwischenzug. This is probably the most popular trip of the year. On this trip, we:

There is some overlap between Geek Culture and Boy Scouting, and this is leads to Scouts and gaming being a natural combination. This year was no exception, however the games changed from last year. Magic: The Gathering (M:TG), of course, was played a lot. There is a group of hardcore M:TG aficionados in the group, and they have their own little corner. I have learned that customizable games, in any form, are not my thing. I don’t have the time or the inclination to actually work through the customizing process. Nonetheless, M:TG was my friend.

I largely played Hive. This is an abstract strategy game for two people in which players move their different “bugs” around the “hive” in unique ways in an attempt to surround your opponent’s queen bee. There isn’t much theme or a story line in this game. It has been described as “the new Chess”. I won’t go that far, but it does have the same strategic elements as Chess: time, space and material. The rules are few, the components are great (you can wash them in the sink if they get dirty!), and it is a LOT of fun.

Our Senior Patrol Leader (SPL) and I organized the first annual Troop 246 Hive tournament. We had ten entrants, both Scouts and Scouters (leaders) and we randomly assigned the seeding for the tournament. There were some close games, including one where I was convinced our SPL was going to win, only to have another Scout, “D.”, slowly work his way to victory. In the end, D. and I faced each other for the championship. That’s how M:TG worked its way in.

You see, while D. is a very good strategist, excellent at Hive, and I suspect would be very good at any game he cared to play, his first love is M:TG. So, as our championship game of Hive was going on, the call of the Magic game two tables over was too much for him to endure. It broke his concentration. He made one critical mistake, crumbled, and minutes later the game was mine.

Of course, when the Troop’s Game Guy (me), the one who introduced Hive, is the winner of the tournament, it’s pretty anticlimactic. I was actually disappointed I won, particularly since I think D. is better than I am. It would have been more fun to celebrate one of the Scouts winning the tournament.

We also played a couple of rounds of The Resistance. Any game that involves trash talk and teenage boys is automatically a HUGE hit, and this was no exception. This is a game where the resistance movement against the Empire (think of the rebels in Star Wars) is trying to complete missions, while the Empire has spies planted amongst them trying to sabotage the missions. Each player plays either a resistance member or a spy, and only the spies know who is who. In our game, accusation of being “a filthy spy” ran all around the table, while everyone used (largely flawed) logic to prove who the spies were. It’s pretty interesting to watch a bunch of normally honest boys play spies and try to shift the suspicion to someone else. My son was particularly good at misleading people. I don’t know whether to be proud or disturbed.

In the end, I came away with three lessons:

Next year, I want to do this all over again.