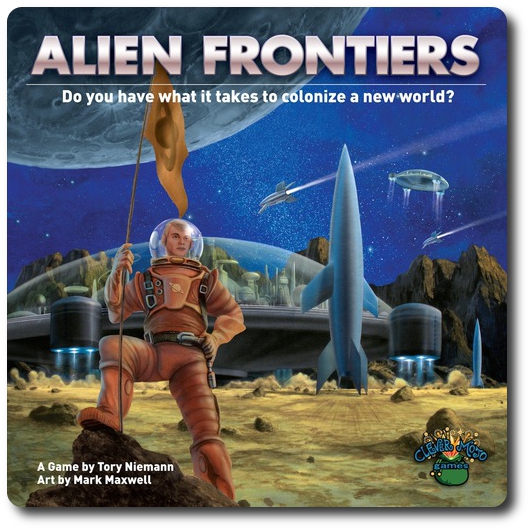 Alien Frontiers was designed by Tory Niemann and published by Clever Mojo Games in 2011.

The game components include:

Players start the game able to use 3 of their possible 6 dice (and can never be reduced to fewer than 3). On the player’s turn, they roll all available dice and allocate them as they see fit to one or more orbital facilities: the worker placement aspect of the game. In addition to the standard restrictions in most worker placement games (i.e., absolute limits on the total number of workers that can be placed in any one area), there might be additional requirements, such as placing dice with matching or consecutive numbers. As for the benefits:

The player with the most colonies in any territory controls that territory; each territory provides a specific bonus to the player who controls it. One very nice touch, the territories are named in honor of famous science fiction authors, such as Isaac Asimov and Frederik Pohl.

Victory points are earned for placing colonies and for controlling territories.

The game ends when a player has placed all of their colonies. The player with the most victory points wins the game.

This game would have continued to languish on my shelf unplayed (along with half of my game collection) had I not joined in a pick-up game at a convention late last year. As the rules were being explained to me, my first thought was of Stone Age, another dice/worker placement game. With only 2 types of raw resources, Alien Frontiers strikes me as a simpler version of Stone Age, but with about the same playing time. My children love games with dice (Pickomino and Elder Sign, for example), so I was tempted to disregard the publisher’s suggested age range and try this with my six-year-old son.

I played two 2-player games with my son, each lasting about one hour. He grasped the gameplay very quickly, although I made occasional suggestions about how he could use his dice. On the second play, he eked out a narrow victory over me. On the third play, a 3-player game, he beat my brother and me with only minimal assistance. I have realized that my son enjoys choice and decision-making in games, although he is also prone to analysis paralysis. Therefore, I have learned to set aside extra time for games like this so that the experience is unrushed.

This is an excellent match for his current level of gaming maturity, in terms of game duration, required reading ability, and complexity of decision-making. Although he is proficient in working towards short and medium-term goals, he has difficulty formulating a long-term strategy. Hence, he can be far more competitive in Alien Frontiers than in Agricola or Caylus Magna Carta (admittedly, he still enjoys those other games, too). 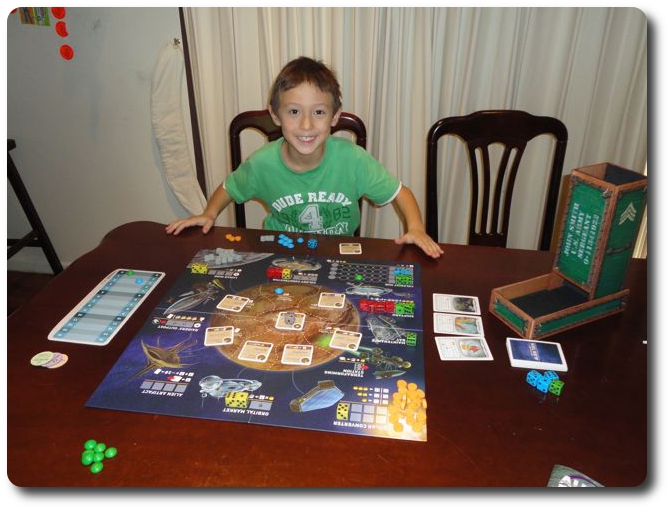 Playing the game - all smiles and victory points

Gamer Geeks, Alien Frontiers is too long for a filler and not meaty enough for a square meal (even if you’re vegetarian), and while that may sound like a double failure, it is a pleasant experience for the less hardcore hobbyists.

Parent Geeks, this game presents an excellent opportunity to play competitively and yet assist your child to choose from several options.

Child Geeks, you can focus on making definite progress through establishing colonies every 2-3 turns, while also ensuring that the dice pool (spaceship fleet) remains a respectable size. The game is not trivial; even so, each colony is worth celebrating as an achievement, win or lose.