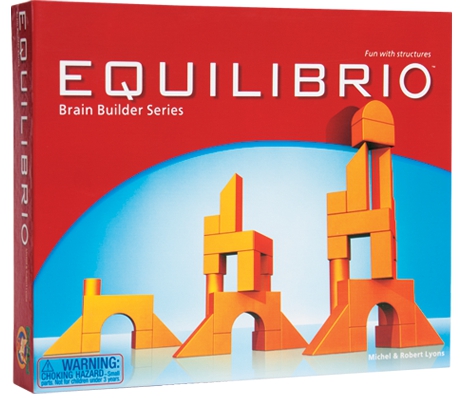 Equilibrio is part of the Architecto line, puzzle games that focus on spatial visualization by building structures out of blocks. The structure puzzles start out simple and gradually progress to more difficult and challenging puzzles. This allows Little Geeks and Big Geeks alike to sit down at the table and play the game at their pace and comfort level. The game also allow for easy free-form play and invites the player to build whatever they can imagine.

Equilibrio is comprised of 18 solid plastic building blocks, refered to as “Geoblocks”, of various geometric shapes. The blocks are solid, smooth, and of very high quality. The block shapes and the number of each shaped block are represented in the following image.

To play Equilibrio, select one of the 60 structure puzzles found in the rule book and remove the blocks needed to complete the puzzle structure (found at the bottom of each structure puzzle illustration). Set these aside but within easy reaching distance. Additionally, , ensure you have a flat and stable building surface to play on. Some of the structure puzzles require balancing the blocks on top of each other. One wrong move and the entire structure could come crashing down. For this reason, whatever building surface you are using should also have a rough surface to provide some friction so as to reduce the amount of block movement.

My little geeks love LEGO and spend countless hours on the floor building new and creative things like cars, spaceships, and once, a fast-food restaurant. The endless possibilities and free-form creative medium that LEGO provides has been a favorite for generations with new little geeks being introduced every day.

I have no doubt that my little geeks will fall in love with Equilibrio. The rules of the game are simple and the Geoblocks are fun to play and build with. I was so certain that my little geeks would love the game, that I didn’t even bother to pitch it to them. I just got the box out, put it on the table, and started building. In no time, all three of my little geeks were watching me, asking questions about the game, and strongly suggesting it was now their turn to play.

After I explained the game and how it was played by building the first structure puzzle, I asked them their thoughts on what they had seen prior to me turning them loose on it.

“Cool! They remind me of much smaller version of building blocks I used to play with.” ~ Liam (age 7)

“You can tell people this gets a Mommy approval, too” ~ My Wife

All three little geeks eager to play the game and a special note of acceptance from my wife?! Outstanding!

I am simply blown away. Never have I seen my three little geeks take to a puzzle game with such feverish delight and intensity before. Even my wife, mom, and I were drawn to the game and would just sit and play with the Geoblocks. The game is just too much fun to play with.

My 7-year-old insisted on playing the game the “correct way”, as he put it, and attempted to build the structure puzzles. My 4-year-old, who tends to be less interested in the rules and more interested in the fun, found a great deal of joy just building with the blocks. Not to be left out of all the excitement, my 3-year-old also joined us at the family gaming table and built his own structures! I was fascinated with my little geeks’ intricate and complicated buildings being formed right before my eyes.

When it was time to put the game away, there was much booing and whining. 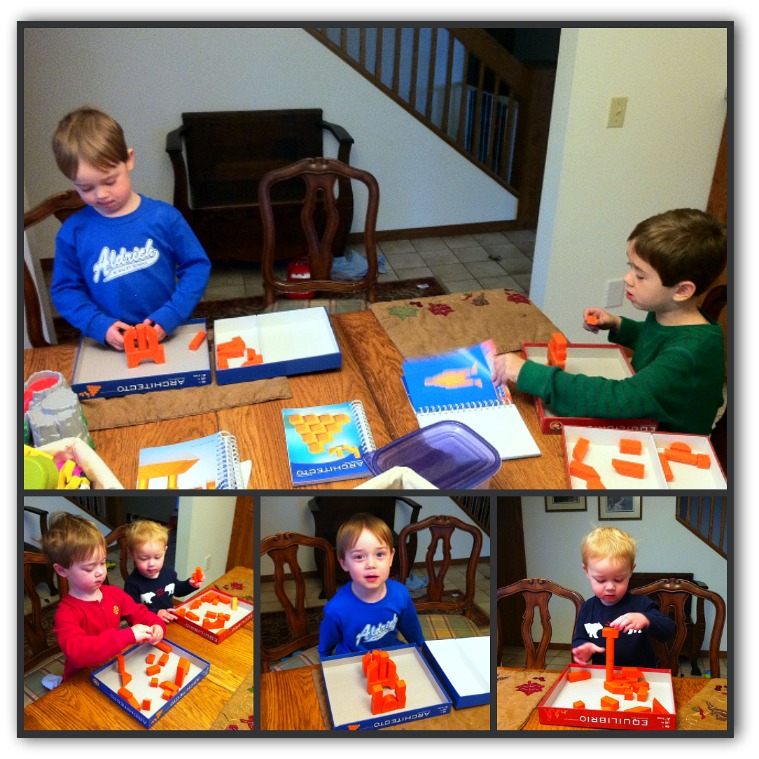 Gamer Geeks, this is a fun puzzle game but it won’t appeal to you as a “gamer’s game”. You’ll appreciate the game for what it is, a solid offering from a game company that cares about their product and it shows. I can’t give it a “Gamer Geek approved” endorsement because I just don’t see Gamer Geeks going to their game closet and telling their friend, “hey, let’s play this!” That being said, Equilibrio is an outstanding puzzle and logic game you will want to play with your little geeks or maybe by yourself for some challenging solo play.

I am exceedingly pleased with Equilibrio and am confounded that I am just now hearing about this product. Supposedly, this game has been around since 2003, a year in which I had significantly more free time as I wasn’t a father yet. At that time, my focus was on games that were of a totally different nature which might account fo why I was so unaware of this game. That’s my reasoning, but that’s hardly a good excuse.

Equilibrio provides a wonderful experience and is accessible to the young and old alike. All that is needed is a creative mind and the time to use it. In my family, the 3-year-old and all the way up to Grandma enjoyed the game. I cannot imagine a better endorsement than seeing such a wide age and experience range all sitting down at the table and enjoying the same game, non-stop.