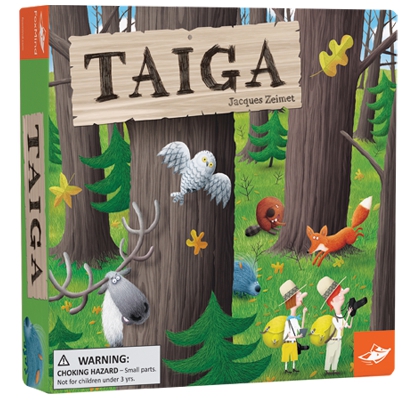 Lace up your hiking boots, grab your camera, and put on your backpack because it’s time to take a walk in the forest to see what wildlife you can spot! Walk quietly and you might just see an entire animal family! Only careful attention to detail and remembering where animals like to hide will help you find all the forest critters. In the end, the most observant hiker will win while the rest scratch their heads wondering where all the animals went.

Taiga is comprised of 10 Animal cards, 10 wooden Animal discs, a large number of wooden tokens, and a cloth component bag. The Animal cards are thick and depict cartoonish images of the animals that live in the forest. The wooden Animal discs and tokens are just that, real wood, and are as durable as you’d expect wood to be. The Animal discs have a painted, colorful image of two different animals, one on each side. The cloth bag is made of a rough cotton and thick, almost canvas like it is texture. All the game components are surprisingly well crafted and of high value. The end result is a very durable and well crafted children’s game.

To set up the game, mix up the wooden Animal discs and place them in a circle making certain that no four discs are showing the same animal. Next, shuffle the Animal cards and place just outside the circle, face-down. Last, deal out 6 wooden tokens to each player. Any remaining tokens are removed for the duration of the game.

You are now ready to play Taiga! 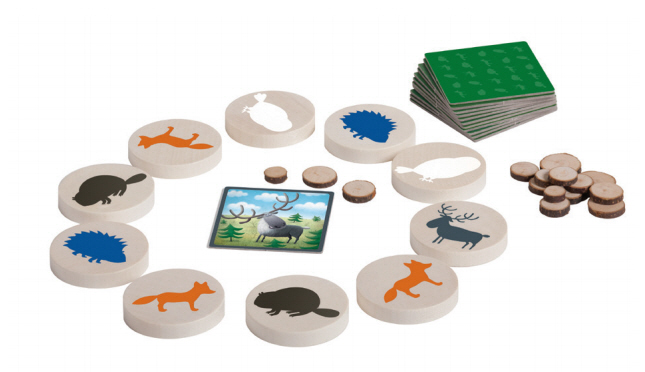 Example of what your playing area will look like when playing the game.

Let’s Go On A Nature Walk!

Taiga is played in 10 rounds with players taking turns during each round. To begin a round, a player flips over one of the Animal cards and places it face-up in the center of the wooden Animal disc circle. Players then take turns flipping over the Animal discs one at a time. The goal is to find all four matching animals.

If the flipped over Animal disc does not match the Animal card, the player’s turn is over and they must put one of their wooden tokens in the circle. If they do not have a wooden token, they are still in the game. Play continues to the left.

If the player flips over an Animal disc resulting in all four of the animals depicted on the card showing, the player collects the Animal card and all the tokens in the circle. This ends the round.

At the end of the round, a new Animal card is drawn and the player to the left of the individual who won the round goes first. If four animals are already showing that match the new Animal card, simply redraw a new card.

To learn more about the game and read the complete rules, visit the official web site.

My little geeks have always enjoyed games that involve memory. Beffuzled, Animal Mastermind Towers, and Cabo, just to name a few, continue to be a big hit with my little geeks. Oddly enough, the traditional and well-known game of Memory, is not high on their list. As I have been told by my little geeks, the game is boring. Find the card or don’t find the card, rinse, repeat, and move on. This is a complete 180 from what they said when they were younger, but tastes change.

When I read the rules of Taiga, I was concerned that it would be too close to Memory to be of interest. The same rules apply to both games that require the players to match the playing pieces in order to succeed. However, that’s where the similarity ends. Taiga has a deeper sense of competition wherein the players collect points throughout the game. Best of all, all those hard earned points can be lost and stolen, too! All this in a game that has an easy learning curve and would appear to play quickly and smoothly.

When I pitched the game to my little geeks, my oldest immediately asked me if this was like Memory and gave me an incredulous look when I told him it wasn’t. After all, weren’t the players just matching animals? I told them I’d let them decide if it was a good game or not (as always) but they needed to play it first before they jumped to any conclusions. My 7-year-old and 4-year-old agreed and sat down at the table with me with their snacks while I explained the game.

After the game demonstration and introduction, my little geeks were thinking differently about Taiga. Instead of turning their noses up to it, they were now leaning forward in their chairs and ready to play! I didn’t miss this opportunity to reinforce that age old adage that one should never judge a book (or game, or person, or anything) without first learning about it. My little geeks nodded their heads and then told me to play the game already. But before we did, I asked my little geeks what they thought of the game so far.

Taiga is a great game! It’s fast, fun, and challenging, but most importantly (according to my little geeks) not like Memory at all. I found this to be a funny comment as Taiga is very much like Memory, just much more competitive. It is this competitive component that makes the game entertaining to both my little geeks and to me. A simple memory exercise is not enough to keep my little geeks interested anymore, it would seem. What they crave is a sense of not only accomplishment but also a sense of good-natured rivalry.

Out of my two oldest little geeks, the 7-year-old did the best overall, but the 4-year-old was nipping at his heels the entire way. The final points were always only slightly in my 7-year-old’s favor with my 4-year-old only being a few points behind. As the games went on, the gap between the points dwindled until my 4-year-old tied and then overtook his older brother! There was much rejoicing at the table from the 4-year-old and smoldering scowl from the 7-year-old. A rematch was immediately declared and off they went again.

More than anything, I really like how Taiga rewards the player with the use of tokens. It is one thing to have more cards than another player, but these are won and kept. The tokens constantly shift hands and reinforce the importance of keeping track of where the animals are while at the same time provide a level of stress. Yes, I said stress. A game that doesn’t generate a sense of urgency and importance tends to lose gamers. As strange as it sounds, while we play games to escape for a short time from our everyday troubles, we often seek a semblance of those very same troubles within the context of the game. 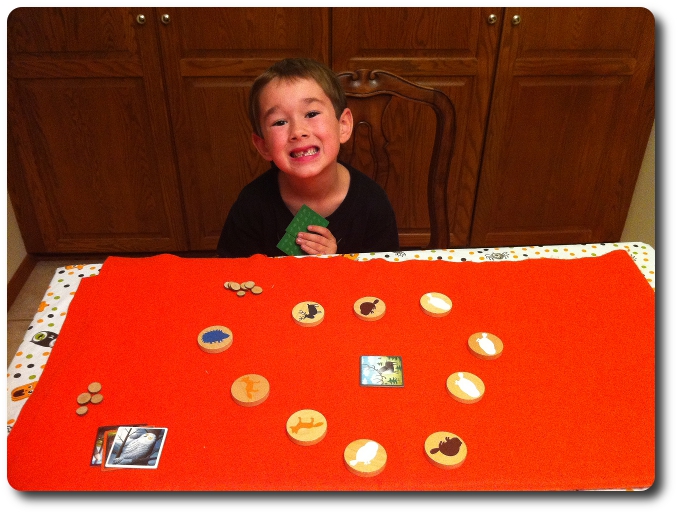 The game immediately caught my little geeks' attention and kept them interested and engaged from start to finish!

Gamer Geeks, while you will appreciate the quality of the components and the way the game is played, it will not hold your interest. Taiga is most certainly a better game than Memory but not enough to make it a game you’d want to plop down in front of advanced gamers. That being said, I think any Gamer Geek worth their weight in meeples should eagerly seek out this game if they have little geeks of their own. There is enough to this game to keep you engaged when playing with much younger players and it’s a good enough game where your heart won’t sink when the little geeks ask you to play it with them.

Parent Geeks, this is the next step up and a better game than Memory. It will not only strength your children’s memory skills but will also strengthen their counting and math skills, too. Best of all, there is a real sense of victory and accomplishment with Taiga that I don’t think exists as strongly in Memory. Both Taiga and Memory are great games, but I think Taiga does it better. Fast to play and easy to pick up, you’ll have no problem putting in a game or two during the day.

Child Geeks, this is a great game to play with your friends and family! Find the animals first and be fast so you can get all the points and win the game! You won’t be left behind in the dust with this game because on every turn, even if it isn’t yours, you’ll be able to learn where animals are. Once you know where all the animals are hiding, be the first to flip them all over and claim all the tokens in the middle of the circle!

I am very pleased with Taiga and would highly recommend it to anyone. My 4-year-old had no problem playing it, my 7-year-old had no problem dominating it, and I had no problem enjoying it. The game works well with 2 players or up to 6 and the difficulty level is just right. The quality of the game is outstanding and is a joy to play with. If you are looking for an entertaining children’s memory game, you simply cannot go wrong with Taiga!

One Response to Taiga Game Review