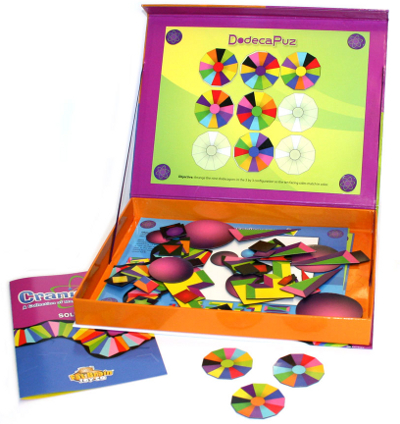 We keep our body strong by running, lifting weights, and doing other exercises. This helps us stay healthy and look crazy good in a swimsuit. But we can’t take our brains to the gym. Or can we? Working with puzzles is the equivalent to putting your brain on a treadmill. By forcing your brain to think differently, new neural pathways are created and the dust that has settled on your mind is removed. Grab your water bottle and let’s do some heavy brain crunches!

Craniatics, published by Fat Brain Toy Company, is comprised of 5 Puzzle sheets (double-sided), 1 Puzzle Solution booklet, and 138 magnetic puzzle pieces that come in many different sizes, shapes, and colors. The box the puzzles and pieces come in also serves as the playing area. This keeps the many magnetic pieces in one spot and easy to store when not in use.

Magnets: How Do They Work?

No, it’s not a miracle (and on a side note…boy…I feel sorry for anyone who thinks it is…I’m looking at you Juggalos…). We are talking simple magnetic fields here that are used in a clever way. The puzzle box has a lid that flips open and folds back. When put in this position, the puzzle solver now uses the flipped box lid as their puzzle solving area and the bottom of the box to hold all their magnets. Now that’s some smart game box design work!

Once the box is open, the puzzle solver needs to determine which puzzle they want to solve. In total, Craniatics comes with 10 puzzles. The 5 Puzzle sheets are double-sided, with one puzzle per side. Each Puzzle sheet lists the objective, rules, and any specific magnetic puzzle pieces that should be used. 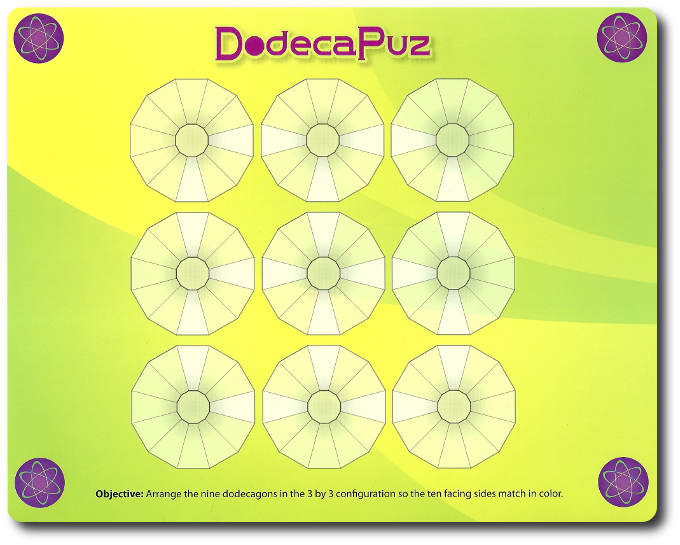 Example of one of the ten possible puzzles to choose from

Once the Puzzle sheet is selected, it’s mounted to the top box lid using 4 small magnets (referred to as “Craniatic pieces”). Since the bottom side of the box lid (the same side that is now facing the puzzle solver) has a thin magnet behind it, everything sticks and stays in place. 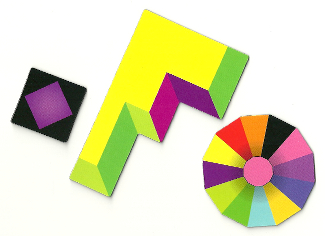 Example of some of the magnet pieces available

The 10 available puzzles are summarized here.

The solution for each of the puzzles noted above are listed in the Puzzle Solution booklet.

Craniatics is going to appeal to our puzzle solvers and solitaire players…and that’s about it. I highly doubt this game will even get noticed by the Gamer Geeks. There simply isn’t enough “game” here to present to them. The few puzzles that do allow for more than 1 player (Spectrix and Binary Bits) do not easily accommodate more than 1 player (ironically) due to the puzzle being solved on the flipped box lid. The players are required to sit side-by-side and crowd around the puzzle solving area which is not that large. I’m certain that anymore than 2 players at a time will cause problems from just an ease of play perspective.

What puzzles are offered are unique and will be enjoyed. They are also complicated without being out of reach. The instructions on each Puzzle sheet are easy to understand, do not require the reader to interpret their meaning, and the examples provided go a long way to help clear up any vague wordage that might exist. And while I believe that all the puzzles being offered can be worked on by a Child Geek as young as 6-years-old, a Parent Geek or older Child Geek will be necessary to answer any questions the Child Geek might have and to assist in the organization of the magnets, of which there are many.

Explaining how to play and interact with Craniatics takes nothing more than plopping down the puzzle solver in front of the box, opening it, and asking them to select a Puzzle sheet. Based on the Puzzle sheet selected, the amount of additional time spent explaining the game will be highly dependent on the puzzle solver’s ability to comprehend what is being described. None of our adults had any questions and quickly jumped into the puzzle box and only a few of our Child Geeks needed a bit more help.

After introducing Craniatics to my two oldest little geeks, I asked them their thoughts on it so far before I let them spill out the contents and burn some brain fat.

“I can pick from any of these puzzles? Cool! Can I play with the magnets afterwards, Daddy?” ~ Nyhus (age 6)

Looks like both of my little geeks are interested in the puzzles. Let’s see if Craniatics proves to be a puzzling good time or does nothing more than confuse and bewilder.

The Child Geeks enjoyed themselves, for a time. The puzzles were found to be engaging and the use of magnets greatly pleased them. Only the puzzle solvers and puzzle lovers of the Child Geek group kept at it, however. Those who didn’t already enjoy the quiet challenge of completing a 1000+ piece puzzle or working through solitaire games lost interest in Craniatics after their first or second puzzle. Even when presented with the puzzles that allowed more than 2 players to compete against each other, the level of interest quickly waned. While we observed the steady decline of excitement with our Child Geeks who preferred board, card, and dice games with groups, we saw a dramatic uptick of excitement from our quiet and more introspective Child Geeks. The colors, complexity, and tactile use of the magnets drew them in and kept them hooked. In the end, the Child Geeks were mixed when it came time to vote for their level of approval. None of the Child Geeks who lost interest in the game thought that Craniatics was bad, but they didn’t want to endorse anything they didn’t have fun with. Our puzzle loving Child Geeks voted to approve it and kindly asked us to leave them alone while they quietly worked on the puzzles. 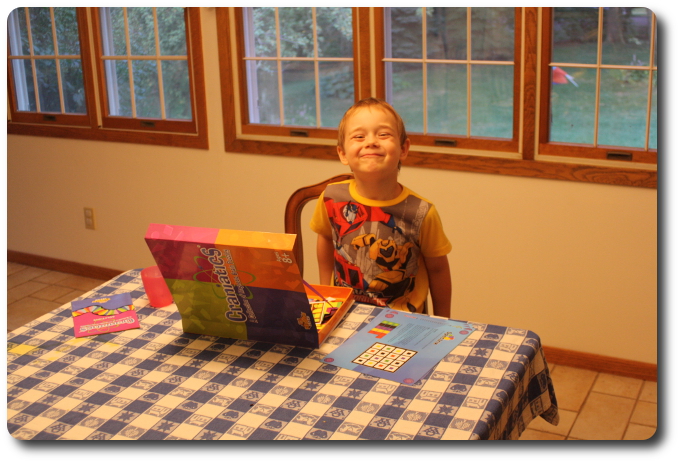 The Parent Geeks very much enjoyed Craniatics, which comes as no surprise. They liked the complexity of the puzzles, the ability to participate in the puzzle solving process with their Child Geeks, and the quick and easy way the game was set up and picked up afterwards. According to one Parent Geek, “It’s games like this that I think should get more of your focus, Cyrus. They are fun, intelligent, and educational. I like shooting zombies as much as the next guy, but spending time with a game that challenges the mind is awesome.” All of the other Parent Geeks agreed, but they stopped short of suggesting that Craniatics was a puzzle game they would like to play by themselves or with their peer group. When I asked why, one Parent Geeks said, “I wouldn’t call this a game so much as a box full of puzzles. That’s great for my family and for my kids, but not something I would bring out when I wanted to play with my friends.” All the Parent Geeks agreed and voted to approve Craniatics as an educational and challenging experience they believed was well worth their family’s time.

The Gamer Geeks took a  look through the puzzles and acknowledged two things. First, they thought the puzzles being offered were good ones. Second, Craniatics was a not a game. They voted to reject it on that basis, but acknowledged its educational merits.

Craniatics falls into the same trap as all puzzles do. Once solved, there is no reason to go back and attempt them. Unless, of course, the individual is attempting to improve their puzzle solving speed or the puzzle is somehow randomized each time it’s played. Craniatics will keep puzzle solvers interested, but only until they have solved everything in the box. Once the box contains nothing that is perceived as a challenge, it will be placed on the game shelf to collect dust or the magnets will be removed and used on refrigerators. Which, honestly, isn’t’ that bad of an idea.

This calls into question the longevity of Craniatics. Out of the 10 Puzzle sheets, only 2 ask for more than 1 player. The remaining 8, once solved, will be of little interest. I would assume the two puzzles that pit more than 2-players against each would keep Craniatics fresh for longer than a normal box of puzzles would, but not a great deal longer. I think it will ultimately depend on the speed in which the puzzles are solved in the first place. If they are found to be easy, the entire puzzle game will quickly find itself to be a forgettable experience. This would strongly suggest that there is a sweet spot in which Craniatics should be offered at the family gaming table. The youngest recommended age is 6-years-old, and I think that is right on the money. Any younger and you are going to lose players based on puzzle complexity. Older puzzle solvers are going to have more experience and will use it to assist in solving the puzzles, which might cast doubts on the level of complexity the puzzles provide in the first place.

Of course, none of this matters if the player is not a puzzle lover to begin with.