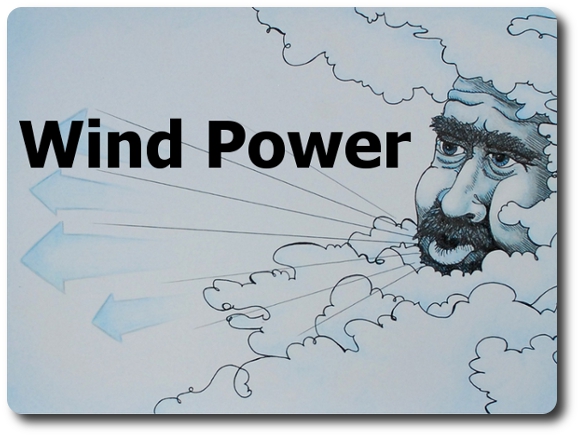 The wind is a powerful force and answers to no one. It is free to wander the world at it pleases, playing in the trees and in the grass. That is about to change. Now the wind can be controlled and the person who controls it with the most mastery will win the day. The rest will be blown away.

Wind Power is a card game comprised of 12 Windmill cards (3 per player), 12 Directional cards, and 36 Wind cards. The cards are made of thick cardstock and big, making it easy for little hands and big hands to hold.

From left to right: Windmill, Directional, and Wind cards

To set up the game, first separate the Windmill, Directional, and Wind cards. Give to each player a set of 3 Windmill cards, all the same style. The Directional and Wind cards are kept in separate decks and placed, face-up, to the side of the playing area, within easy reach of all the players.

The players will now set one of their Windmill cards on the table. Depending on the number of players, their initial placement will differ.

The playing area, while open on the table, should be viewed like a grid. Cards are placed next to each other and treated like “squares”, regardless of their placement or position. Cards can be played on any open space in the playing area.

The Winds of Change

Wind Power has three specific card types. These are the Windmill, the Directional, and the Wind cards. How these cards are played and what they do is summarized here.

When the Wind Blows

Once a player selects and places a card, their turn is over and the next player goes. This continues until all the cards are played. 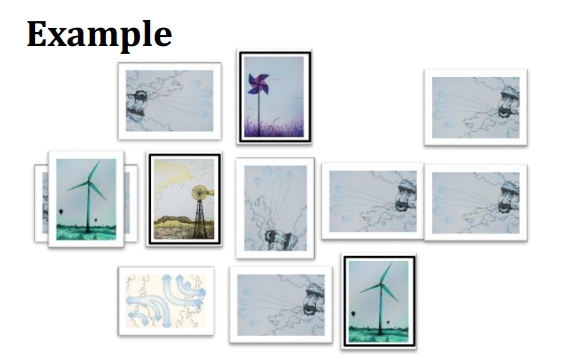 To learn more about Wind Power and read the game rules, visit the game’s official web page. You can also play the game online, if you want to try before you buy.

Wind Power should be a hit with my little geeks and my friends. For the Gamer Geeks? Hmm…perhaps. Wind Power has a lot going on for such a simple card game with very little rules. The open board and card hierarchy provides a great deal of freedom in the game play and some wonderful opportunity to really flex a player’s strategic and tactical muscle.

Because the game is very straight forward, I gave the game to my 7-year-old to read and teach to me. I had done this once before with great success. By switching spots from “teacher” to “student”, this greatly empowers my little geek and I find they put much more into learning and playing the game. Highly recommend doing this when the opportunity presents itself.

This was also something of a test for my little geek. The rules for Wind Power are not altogether clear at times and can be confusing. As expected, my little geek didn’t understand a few aspects of the game. We worked through the rules together, as planned (I’m so devious), and we made it an exercise in teamwork. Once we both had the rules down, we set up the game. While my little geek completed the set up, I asked him what he though of Wind Power so far.

“I like how the cards can be placed anywhere on the table, but I think the table will look pretty crazy without a board to play on.” ~ Liam (age 7)

Crazy? Certainly! But will the game be fun? Let’s give it a try and see if the winds are blowing in a positive direction.

Wind Power is a quick and challenging game. What starts out to be pretty simple, quickly turns into a mental exercise to determine where best to place cards for maximum benefit. Several times, players I tested the game with vapor locked and just couldn’t figure out where to place their cards. This is why I am suggesting the game is moderately difficult for the little geeks. For the adults, vapor lock can be worked through. For little geeks, as fast as their minds go, sometimes too much choice can be overwhelming.

Take, for example, my 7-year-old. When we first played the game, he started off by simply directing as much wind as possible to his single Windmill. I reminded him, half-way through the game, that he had to put his other two Windmill cards out, too. This threw him for a loop and he now spent double the amount of time thinking about not only where to place a card, but what card to pick. The difficulty of the game originates from the many possibilities. For some, this might just be a bit too much. For others, a fresh breeze and a welcomed change.

My little geek, despite his inability to easily make game choices, greatly enjoyed Wind Power. He found it to be a rewarding experience and was fascinated how much he could control the wind and where it would blow to. The game builds like a puzzle in reverse. The more cards you add, the more complex the puzzle. Each turn adds another level to the puzzle that is constantly being evaluated by all the players.

The constant reevaluation made the adult non-gamers pause just as much as my 7-year-old, but they kept at it. The game draws you in, takes hold, and moves fast. For the more seasoned gamer, the game was very straight forward, but hardly simple. Little Geeks to Gamer Geeks all had to think about their moves and second guess themselves often. The only difference was length of time between turns. 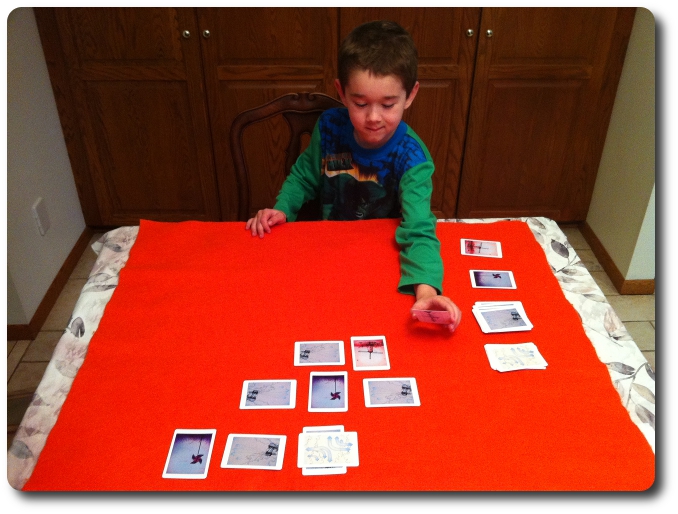 My little geek hesitates before placing his card - lots of ways to play makes it difficult to choose!

Gamer Geeks, this is a light game of strategy and tactics. Card placement becomes all important and can even be trumped by other players later in the game. This makes every turn an exercise in fine-tuning and subtle tactic shifting. The game grows in front of  you and takes on a life of its own. You’ll find yourself following wind paths over and over again, looking for the best way to cut them in two and steal some of the wind for yourself. There are just enough cards to make the game complicated without being heavy. The game plays very quickly and will give even the most elite of Gamers pause to reflect on how best to win the game.

Parent Geeks, this is a wonderfully fast and rewarding game. It will test everyone’s visuospatial skills as they mentally follow and attempt to predict the wind paths. Constant focus must be on the ever shifting winds, but the key to success if not reaction, but action. This is because the players get to choose their cards each round, reducing randomness. Each player’s turn is as important as the last. This will make everyone at the table lean in and watch what other players are attempting to do. Knowing where your opponent will want to guide the wind is just as important as where player’s place their cards on their turn. Non-gamers will be challenged, but the simple rules and game play make Wind Power an easy game to teach and quick to play without reducing any of its complexity.

Child Geeks, this is an outstanding game where you will create invisible roads of wind. Guide the winds, twisting and turning them, until you have the wind exactly where you want it. Be careful, though, as your opponents can shift the wind in a different direction! Take the time to think out your moves and make every card placement count. Also, keep in mind that all the wind in the game doesn’t count at all until the game ends. This gives you enough time to rethink your moves and adjust your game play as needed.

Wind Power is a great game. Simple, elegant, challenging, and sometimes impossible. Depending on the players you are engaged with, the wind paths will be very uniform or a crazy and twisted mess. This is part of the fun and the magic of the game. Giving the player so much freedom provides a higher level of flexibility and tactics, but it can also lead some players down a road of ruin as they get bogged down in the details instead of keeping an eye on the game at a higher level. But to be honest, a smart player will do both. You need to view the game at the 1 foot level and the 50 feet level all at once. The short and long-term gains will add up and will let a player be offensive and defensive at the same time. Do check out this wonderful card game that will blow your mind and leave you winded.