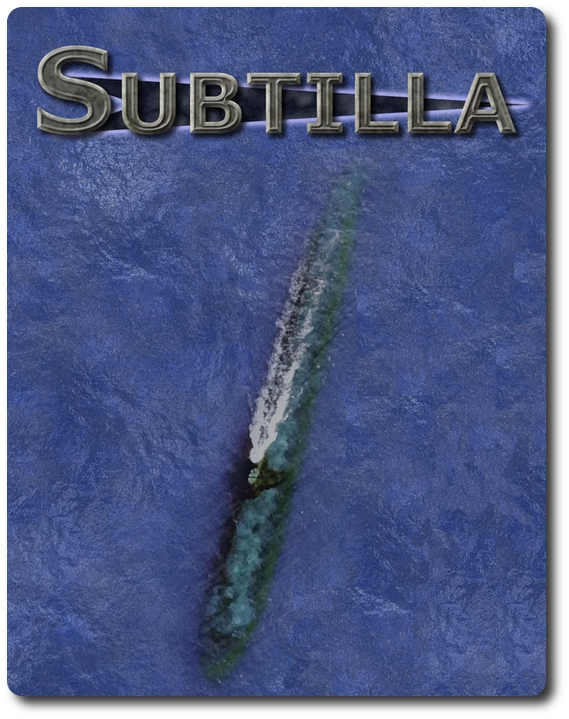 The vast ocean rolls and swells from horizon to horizon. Navigating these waters are ships of war and they are on the hunt. Somewhere just out of sight is the enemy. Once they are spotted, torpedoes and guns are loaded; made ready to fire when ordered. As the ships approach, the admirals of the fleet know that skill and skill alone will win the day.

To set up the game, place the game board in the middle of the playing area with the players sitting opposite of each other behind the Subtilla game title on the game board. Each player is given 1 Submarine and 5 Boats, all of the same color and matching the color of the “Base” closest to them (yellow or black). The game board shows where the Submarine and Boats are placed and in which direction they should be facing (nice touch).

After placing the Boats and Submarines, each player is given 10 Stealth Markers, 10 Hit Tokens, and 1 Battle Die that matches their fleet’s color. Lastly, each player takes 5 Torpedoes of their matching fleet color and places them, standing upright, in the Power box located to the player’s immediate right on the board. 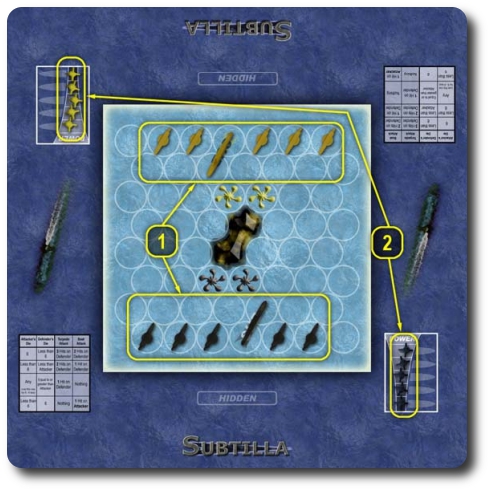 Game set up, with Boats and Submarines set (1) and Torpedoes (2) at the ready!

Players will take turns and complete 3 steps per turn in the following order.

A Word on Stealth

Combat is determined by each player rolling their six-sided die. The results of the roll are looked up using the Attack Results table. The results for the same roll are different depending on if the attack was initiated using a Boat or a Torpedo.

When a Boat takes damage, the player places one or more Hit Tokens under that game piece. Boat pieces simply place the Hit Tokens directly under it. Once a Boat takes 3 or more damage, it is removed from the game. The Submarine is a different story, and oddly enough, can never be destroyed. Instead of using Hit Tokens, the number of available (standing upright) Torpedoes represents the Submarine’s power. For every hit a Submarine takes, its power is reduced by 1 and any upright Torpedoes are placed on their side. If a Submarine is ever reduced to a power level of zero (all Torpedoes on their side), the opponent (not the owner of the Submarine) immediately gets to place the Submarine piece anywhere on the game board in a legal space.

Boats can fire at each other, presumably using cannons. This gives the Boat the ability to attack any adjacent target. The Submarine does not have this luxury and must use Torpedoes. Torpedoes are more powerful and less dangerous (there is no chance of backfire), but each Torpedo launched reduces the Submarine’s power. This makes Torpedoes a powerful weapon, but also exposes the player by reducing the strength of their Submarine.

Play continues until one player destroys all 5 of their opponent’s Boats or occupies both bases on the game board with their game pieces.

To learn more about the game and read the instructions in full (we only summarized them here), see the game’s official web site.

Ah, battles at sea. Reminds me of my early days as a little geek playing Battleship, a game where players secretly placed their ships on a grid and then randomly called out Bingo numbers in attempt to send their opponent’s boats to the bottom of the ocean. My little geeks have played Battleship and enjoyed it and so do I.

Subtilla is much more complicated, open, and aggressive. The player’s do not hide behind their shields, but face each other in open combat. This makes the game all the more exciting, but also more frustrating. No one likes to feel picked on, after all. Combat games, even light skirmishes, can be a double-edge sword (see what I did there?) providing a lot of fun and challenge,  but a lot of disappointment, too.

How my little geeks will react to the game is dependent on two very important things. First, they must feel confident with the rules. When the game starts to take an ugly turn, a gamer can always fall back on their understanding of the rules to help them work through sticky points in their strategy and tactics. Second, they must not be rushed. If you go to fast, you are bound to make mistakes which can result in losing the game.

To address these two concerns, I made certain we played the game on a lazy Sunday and I introduced the game the evening before, explaining it to them, and getting them excited. I gave them time to play with the game pieces themselves, ask any questions they might have, and to get familiar with what the game was all about. The next day, we played it and they approached the game like it was no big deal with a high level of excitement.

On the day we played the game, I asked my little geeks what they thought of the Subtilla so far while I set it up for our first game.

OK, the “banana boat” comment requires a brief explanation. The evening before, when I let my little geeks look and play with the game, they thought the yellow Boats were bananas. Putting fruit aside for the moment, both of my little geeks are excited to play the game. Let’s see if they enjoy it.

Subtilla was a success, but not with both of my little geeks. My 4-year-old just didn’t connect with the game and grew bored. He told me he didn’t want to play anymore about 10 minutes into it. When I asked him why he didn’t, he just shrugged, gave me a hug, and said “sorry” over his shoulder as he went off to play with his robots. My 7-year-old, however, was greatly enjoying the game. He is a much more advanced game player than his brother and has more geek stamina as a result. He was able to play the game from start to finish like a champ. We played two games, with him winning one and me the other.

Game play wise, Subtilla looks light until you get halfway through it and there is little room to maneuver. A simple move-and-fire game switches gears into an aggressive area control experience at sea. This is because the Boats and Submarines essentially control area and line of sight, allowing the players to move their pieces defensively and offensively at the same time. The more of the board you control, the less options your opponent has. This is what ultimately let me win the game against my 7-year-old. I simply outmaneuvered him.

There is also an element of luck that will make even the greatest strategy a possible dud if you’re unlucky. This can be frustrating in all games, but Subtilla does a good job of balancing this out by taking into account rolls from both players and then determining the result using the Attack Results table. This also made the combat feel a lot less one-sided and meaningful. Instead of just waiting to get hit, the defending player had a chance to avoid it.

My 7-year-old liked Subtilla and the adults I played it with did, too. Well, most of the adults I played it with. The non-gamers were either intimidated or exasperated by the game. Clearly, Subtilla brings a bit too much “game” to the table for the non-gamer to really enjoy it. Just goes to prove you can’t make everyone happy, which is perfectly fine.

As for Battleship, Subtilla has replaced it, completely. 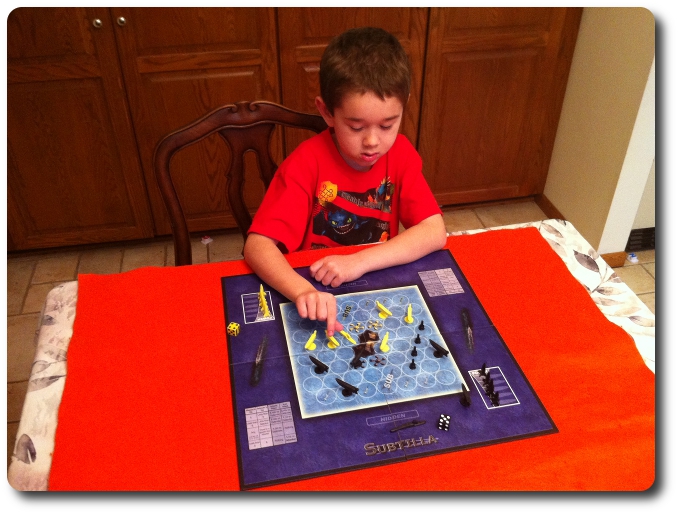 My little geek moves in for the kill!

Gamer Geeks, Subtilla is an easy to play and easy to learn 2-person combat game that requires enough strategy and tactics to makes it worth your time. The lightness of the game is perfect for a starter game in the evening when waiting for larger crowds or just a fun game to play because there is time and you want to scratch that gaming itch. What Subtilla  is not is complex, but it is streamlined to a point where you really need to think about your moves to outmaneuver your opponent. Failure to do so will send your fleet down to the ocean floor to rust. For such a short game, it packs a punch.

Parent Geeks, this is an excellent game for two players. It does a great job of providing a fun and challenging experience without being rules heavy or terribly demanding of the players. That’s not to say the game doesn’t require the player’s total attention and focus. There are a lot of pieces to move but the reduced game space makes it all manageable, combat is fast and fair, are there are enough options available to the player to make them feel empowered and keep them engaged. For your non-gamer friends, this just might be “the game” that gets them interested in seeking out more complex gaming experiences.

Child Geeks, there is a lot going on in this game, but you are never required to manage all of it at once. While you get to move all your pieces, it is optional. While you can engage in combat, it is optional. You can do what you want if you want to. The only concern you should ever have is making certain you leave yourself open to all the options. Do everything necessary to not put your game pieces in a corner or be a sitting duck. Take opportunities as they come and risk it all! If things go right, awesome! If not, learn from it and make your next move with confidence!

Indie game designer, Matt Worden, has once again created a game that is both simple and fun, challenging without being out of reach, and interesting enough to appeal to a wide group of ages and skills. His games “just work” and it is clear he spends a great deal of time and personal energy to make his games enjoyable. In my opinion, Mr. Worden represents what Indie games are all about – creative freedom and passion for the hobby. He doesn’t compromise and delivers quality game experience. If you are looking for a game that was clearly made with “fun” in mind, Subtilla is for you.

One Response to Subtilla Game Review