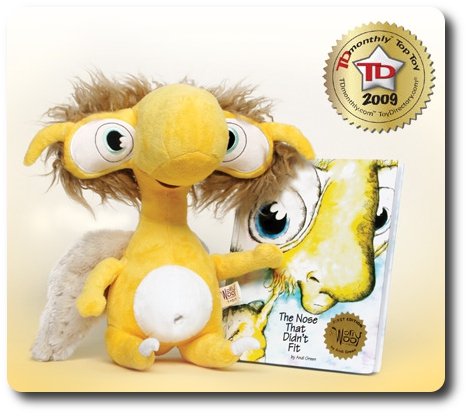 Each of the WorryWoo Monsters anthropomorphizes a different emotion, and for Rue, that’s insecurity. In the book, Rue feels self-conscious over the size of his nose, and decides to have it shrunk by a wizard. While he’s thrilled at first to have a normal-sized nose, he soon finds himself missing his old one, and finally learns to appreciate himself just the way he is.

The WorryWoos are called “monsters”, but don’t think of them as scary. These are monsters in the way Jim Henson’s Sesame Street and Muppets characters are: adorable, quirky, and filled with personality.

The toy Rue is a quality stuffed toy; detailed and sturdy, but soft enough to cuddle. He seems to be a hodgepodge of parts from different animals, but the result is an original little creature. He will probably elicit mixed reactions from people (my wife wasn’t too taken with him), but according to Green’s comments on the website, that’s part of the deal.

The book is targeted at children, and it hits that target well. The art is unique and whimsical, but very expressive, and the story is written in a poetic verse following a traditional rhyme scheme. There are about 70 pages to read, which is long for a children’s book, but the pages go by quickly, with only one or two sentences per page. That leaves a lot of space for the stylistic watercolor artwork (also by Green), and that space is used wonderfully.

And as far as the toy Rue goes…

I think he’s cute! I want one! ~Mikayla

He’s so soft and cuddly! He has a big nose. ~Elyana

The only parts of the story that I’m not crazy about is the rhyme scheme (which is an overused style and doesn’t always flow well) and the plot (which seems a little forced). It’s weird to comment on those things in a children’s book, but we have a small library of such books now, and I am getting a little picky. Neither of those things detract from the point of the book, however, which is an encouraging story about learning to accept yourself just as you are.

My kids have no shortage of stuffed toys, but they are both asking for more WorryWoos. They vehemently defend Rue’s cuteness to their mother, and my five-year-old loves snuggling with him when she goes to bed. She has especially caught on to Rue’s emotional struggle, and I think that’s part of what draws her to him.

It’s that combination of cuddly toys, charming characters, and encouraging stories that makes me think the WorryWoos will be around for a long time.

The book and toy were provided to Father Geek for the review. Father Geek was not paid, bribed, wined, dined, or threatened in vain hopes of influencing this review. Such is the statuesque and legendary integrity of Father Geek.