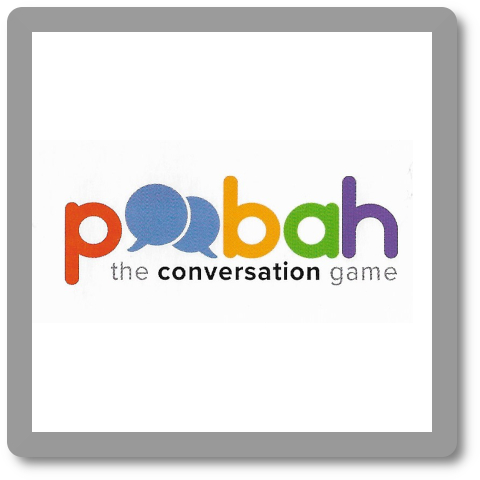 Best selling self-help book author, Karen Salmansohn, said “Choose to focus your time, energy and conversation around people who inspire you, support you and help you to grow you into your happiest, strongest, wisest self.” Communication is key to our species’ survival. From the very first hand motion telling another Neanderthal that a giant tiger was nearby to a child telling their parents that their stomach hurts. Without communication, we cannot share, grow, or assist. Making a game out of this essential skill further strengthens bonds with friends and family.

Poobah, designed and self-published by the Rockwell Brothers, is comprised of 250 cards, one small pencil, and a pad of voting Ballots. The cards are as thick and as durable as your standard playing card. No artwork is provided other than the logo of the game on the back of the card and an icon on the card’s front that suggests the card’s category.

To set up the game, first have everyone sit together and have a hard surface to write on. A clipboard or a book works just fine if you want to sit on the floor. Heck, the floor even works.

That’s it! Decide who will be the first “Poobah” and begin.

Let’s Have a Conversation, Shall We?

Poobah is played rounds and turns for a total number of rounds defined by the players (game rules suggest two to three by default). A game turn is summarized here.

Step One: The Poobah Draws a Card

The current Poobah draws a card at random and reads it out loud to the group. Each card contains a single question or a request spanning one of five different categories. The categories are “Exploring Feelings”, “Sharing Stories”, “Making Decisions”, “Voicing Opinions”, and “Showing Creativity”. The idea is that the cards focus on emotions, topics, decisions, critical thinking, and creative problem solving. If the Poobah does not like the card they have drawn, they are welcome to draw another one.

All the other players in the game, in turn order sequence (starting with the player directly to the left of the current Poobah), now respond to the text on the previously read card. There is no time limit for each response, but it’s generally understood that all players should answer as quickly as possible to keep the game going at a reasonable pace.

After each player has had an opportunity to respond, the Poobah now writes the name of the player on one of the voting Ballot pieces of paper. This should be done in secret. Once the name is written, the Ballot is placed in a bag or a box where it should remain undisturbed and confidential until the end of the game. We found that the top of the game box worked great for this.

The role of Poobah is now passed to the next player in turn order sequences. Steps one through three noted above are then repeated. After each player has had an opportunity to be the Poobah, a round of game play is complete.

The game ends after the player determined number of rounds have been completed. Each player should have had a chance to be the Poobah once per round, ensuring that no one player is ever cheated the opportunity to vote or to get votes.

The Ballots are now counted. A player earns one point per vote. The player with the most points (votes) is the winner.

To spice things up a bit, the game comes with several suggestions on how to augment the game play.

To learn more about Poobah, visit the game’s web page.

The Child Geeks liked the conversation, but found the voting to be silly and frustrating. According to one Child Geek, “What am I voting on? How much I like the answer? The person? If I think the answer is true? Or do I think the answer is better than other answers provided?” This question was asked by our Child Geeks (and others) repeatedly. It was decided that players should “vote with their heart”, but this also meant there was no standard for voting. As one Child Geek put it, “I think this is a fun activity, but not really a game. I don’t care that I don’t win, but I do like hearing all the answers. Also, I think people lie a lot in this game just to get votes.” Probably true. When all the votes were counted, Poobah came up short with a mixed endorsement from the Child Geeks.

The Parent Geeks liked what the game was about, but didn’t think it did much in the way of entertainment. According to one Parent Geek, “This feels like Apples to Apples without the cards. The players are just answering questions or doing silly things. It’s a party game, but it feels old and not very inventive.” Another Parent Geek said, “A great game for the family during the holidays and to learn about each other. Better than Charades, that’s for sure. I think the game is just OK. Nothing really new or exciting here. Plus you have to vote on the best response, which is so crazy subjective there is no way to really get better at this game. Which tells me you don’t play it to win. You play it just to interact with others. I don’t need a game to do that.” Like the Parent Geeks, the counted votes showed that our players were lukewarm to Poobah, not really liking it or disliking it.

The Gamer Geeks, however, had a very strong opinion. According to one Gamer Geek, “The game sucks. Player A reads a cards. Player B responds. Player A decides if they like Player B and votes accordingly. Horrible. I’d rather play Apples to Apples.” At which point, all the Gamer Geeks at the table chuckled. Another Gamer Geek provided a more measured response saying “This is a good example of a party game. It allows players to interact, listen, and enjoy each others company. The game aspect is contrived, favoring the idea that a game need have some sort of winner. But that is not the case here and hurts the game itself. This is not a game. This is an activity. They should have marketed it as such.” All the Gamer Geeks voted and their response was clear. Poobah was not a game they enjoyed.

I am in agreement with the Gamer Geeks on this one. I found Poobah to be uninteresting and stale, as in tedious from familiarity. There is nothing new here or inventive. The game is a box of cards with directed questions and actions with no sense of who the audience is. You could put this game in front of a first grade class or the occupants of a prison cell block and the results would be the same (although the answers would be alarmingly differently).

Understand, of course,that I am saying this after years of playing party games. Decades of game play, people. I have seen it all, pretty much, and there is very little in the way of innovation in the party game design space. Which makes sense, as it’s difficult to create a game that can be played by many people with different experiences and skill sets. The concern I have with Poobah is that it brings nothing new to the gaming table. Of course, if you’ve never played a party game before and Poobah is your first experience in the party game genre, I’m sure you’ll have a much different reaction. But for me, a player who has been chucking dice, shuffling cards, and moving pieces across the board for years and years, Poobah falls flat.

But let’s be fair.

Poobah is being positioned as a tool. Its goal is to “unite people” and “power conversation”. This is done to focus small groups to consider ethical decisions, improve self-esteem, improve academic performance (somehow), and lower rates of substance abuse, teen pregnancy, eating disorders, and depression. How? Through conversations. If you talk about it, you can deal with it. Which makes total sense to me. We live in a society were mental illness is a stigma and those who suffer from it feel the need to hide it from the very people who want to help. I’ve been told by a dear friend that it was easier for her to tell her friends and family that she was gay and is still scared to tell the same folks that she suffers from an eating disorder.

But it gets sadder.

The game itself hijacks its goal. It’s a randomized scripted conversation with a poorly implemented scoring system put in place to suggest that one person’s response is better than another. Which isn’t a good idea when the game’s goal is to make players feel welcome and want to share without fear of being judged. Guess what, player? You are being judged! And you don’t get votes for being you. You get votes because the Poobah liked your response more than the others. Yep, that’s right, you are now competing to be liked, forming your response to appeal to another’s values. Not yours. That’s the game, which isn’t about being truthful or sharing. It’s about providing an answer that you believe the Poobah will like best. Truth and honesty is replaced by the drive to achieve approval.

Just not good. You shouldn’t try to win a conversation. You should just have it.

Poobah is not a game I would recommend to others who have played party games in the past. It’s a game I would suggest to anyone who hasn’t. Especially for those individuals who have rotating players. A good example, as already stated, would be a school group or a small class. If nothing else, Poobah is a great ice breaker with a bit of competition thrown in to make it feel like players have something to strive for. But really, in the end, the goal is to interact with each other. This means responses to the questions could be personal and true or outlandish fabrications meant to earn the vote of the Poobah. Either way, the game does what it says. It creates a conversation. Whether that conversation is worth having or not I leave to you, dear reader. In the end, what matters most is that we communicate. You don’t need a game to do that, but it certainly doesn’t hurt, either.