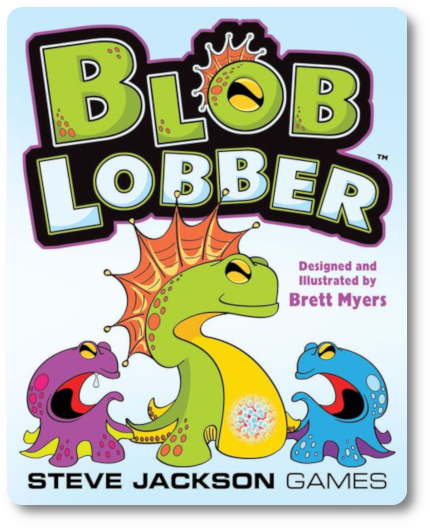 American essayist, lecturer, philosopher, and poet who led the transcendentalist movement of the mid-19th century, Ralph Waldo Emerson, said “Shallow men believe in luck. Strong men believe in cause and effect.” I don’t think “luck” is something you need to believe or disbelieve in. It’s just what we call the outcome of random possibilities that are not in our perceived control. Get off your high horse, Emerson! In this game, skill is set aside and replaced with the very real sense that the universe is on your side or laughing at you.

Blob Lobber, designed by Brett Myers and published by Steve Jackson Games, is comprised of 33 round cards. The cards are as thick and as durable as a standard playing card. Illustrations, also by Brett Myers, are minimal but colorful, depicting the different types of blob monsters in the game.

To set up the game, first find yourself a good solid and flat playing surface where all the players can stand around it. The rules suggest a round table, but any elevated raised surface will do. For example, a family dining table, coffee table, or even the floor (which isn’t raised, but is flat). Just make sure that players, regardless of age or arm length, can all reach the cards and can walk around. You won’t be sitting when playing this game.

Third, find and remove the four “Blob Queen” cards, setting these temporarily aside. 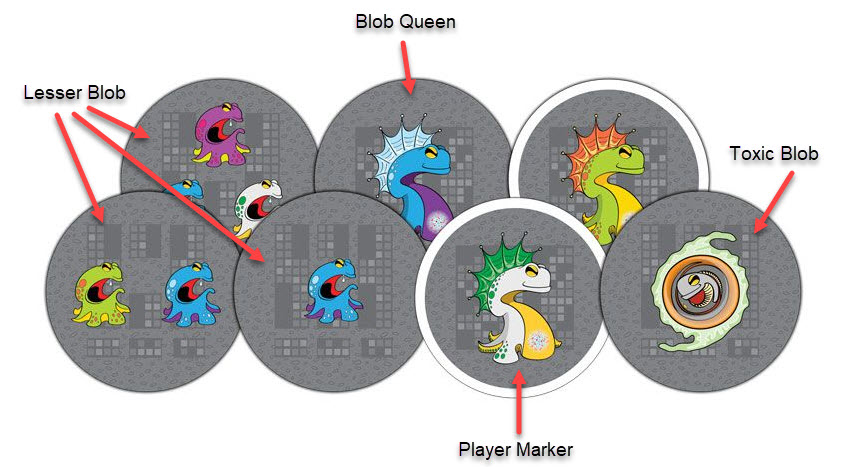 Blob Lobber is played in turns with no set number of turns per game. On a player’s turn, they will draw one card from the Bomb draw deck and drop it on top of the cards currently in the playing area. When dropping the card, its distance from the playing surface must be at least 12 inches (one foot). When dropped, it must flip in the air at least once. The goal is to drop the card on “enemy” blobs.

If the card, once dropped, is released below the 12 inch requirement, does not flip at least once, or lands outside of the playing area (i.e. off the table), the card is picked up and dropped again. Any cards that might also leave the playing area during the drop (other than the player’s dropped card) are removed from the game.

Where the card lands and its facing determines the player’s next action.

This completes the player’s turn. The next player in turn order sequence now goes, drawing a card from the Bomb draw deck, and giving it a drop.

Picking Up the Mess

The game ends when the last card from the Bomb draw deck is played and resolved. All players now review any cards they collected during the game. Cards remaining in the playing area are ignored.

After all the points have been calculated, the players announce their totals. The player with the most points wins the game.

The Child Geeks found the game to be both fun and frustrating. According to one Child Geek, “The cards never drop the way I want them to! Stupid cards! Fall right!” Another Child Geek said, “The challenge of the game is really to not get greedy. It is easy to drop a card and it will flip on its own. You can aim all you like, but you have no real control over the card. What you do have control over is where you drop it from. I think the best strategy is to go for little points or go for big piles where you will at least score a few points.” When the votes were taken, the Child Geeks endorsed Blob Lobber, finding it to be a fun game to play with friends. The only advice they give to you, dear reader, is to not play it with a dog or a cat nearby who wants to get on top of the table or be the center of attention. Hard to drop a card around a family pet.

The Parent Geeks liked playing the game with their kids, but found the game itself to be less than thrilling when playing it with their peers. According to one Parent Geek, “A fun family game and one I think you can easily pack in the car and take on trips – although I don’t think I’d want to play it on some of the hotel floors I’ve been in. I think this game is best for the kids and not for adults because I just didn’t have fun when playing it without my kids.” Another Parent Geek said, “A game of luck and randomness. Easy to play and easy to put away. A great game for my kids and I to play.” When all the blobs were put back in the box, the Parent Geeks voted and gave Blob Lobber a mixed endorsement, approving it for their family, but not with their adult family friends.

The Gamer Geeks were not impressed. According to one Gamer Geek, “I pick up a card, drop the card, and then don’t care. Score? Don’t score? Doesn’t matter. You’ve lost the game just by playing it.” Another Gamer Geek said, “I think my fellow Gamer Geeks are being a bit harsh. This game would be fun to play as an adult drinking game, as a late night game after heavier games, or just as a quick pick-up game at a convention. Not a game I’d seek out, but I wouldn’t say no to it if it was offered.” All the Gamer Geeks we played Blob Lobber with agreed the game was quick and that it wasn’t that entertaining. This resulted in Blob Lobber being rejected by our gaming elitists.

Blob Lobber is a silly game. If you don’t take it seriously, you’ll do just fine. One could become better skilled, I supposed, practicing dropping cards when other players are not available, but I don’t see the point. The game is intended to be random with the illusion that the players have some semblance of control over their drop. Keep in mind that the card must flip over at least once to be considered a legit play. This is where any degree of skill goes out the window and is replaced by a boat load of luck. No wonder the Gamer Geeks didn’t like it, as they naturally gravitate towards games of mental skill, strategy, and tactical thinking. None of that is here, but it isn’t completely mindless, either.

The “trick”, as stated by one of our Child Geeks, is to be smart about the general location where you want to drop your card . This does require a bit of critical and logical thinking. Nothing heavy, mind you, but a quick risk and reward analysis on a player’s turn is necessary.

The only big issue I had with the game is that the cards do not always flip over. For example, one of our players had to retry seven times before they got their card to take the required flip. By the time they made their seventh attempt, I got the very strong impression they no longer cared. The card flipping requirement feels a bit heavy-handed, but is necessary. If the game didn’t have it, players could just take their card and dead drop it on top of a pile, which is super easy to do and fairly accurate.

And here is where I think the game did some damage to itself. The requirements for the card drop did cause many of our players to retry their turn, extended the game’s length. The average playing time for our groups who were trying to be competitive was around the 25 minute mark. For those who just took a card and flipped it, the game took around five minutes. The game feels way too long for what it’s all about if you want to play to win. In short, it over stays its welcome at the table and the players start to feel disengaged. The first half of your games will be filled with focused attempts to try to determine how best to drop the cards, where the later half will be significantly less so. Not less entertaining. Just less engaging.

Blob Lobber is not a game that will require a lot of thinking, but it’s entertaining with the right crowd. That right crowd being the Child Geeks. This is a relatively quick and quirky dexterity card game that demands little from its players other than their patience. Do give it a try if you are in the mood for an easy game filler or something different at your family gaming table.