Conquest of the Stars Game Review 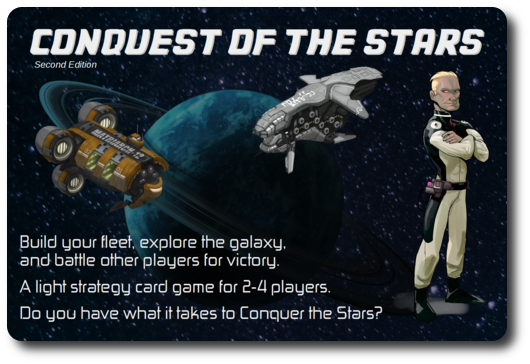 Conquest of the Stars, designed by Troy Pichelman and published by JTP Games via the Game Crafter, is comprised of 91 Fleet cards and 30 Explore cards. The cards are as thick and as durable as your standard playing card. The card artwork depicts various high-tech spaceships, distant planets, and space anomalies.

To set up the game, first separate the cards into two different decks. When completed, there will be a Fleet deck and an Explore deck. Shuffle the Explore deck and place it face-down in the middle of the playing area. This is the Explore draw deck for the duration of the game.

Second, shuffle the Fleet deck and deal 8 cards to each player, face-down. These cards are the players’ starting hand. Players should look at their cards at this time, but keep them hidden from their opponents until played. Place the Fleet deck face-down next to the Explore draw deck. This is the Fleet draw deck for the duration of the game.

When Mankind started visiting distant planets, they brought with them their hopes, their dreams, and their armaments. Space is a dangers and hostile place. Weather it be the inhospitable environment or an enemy gunship, every captain quickly learns that the only safe way to handle any situation is to aggressively tackle it until it’s either fixed or destroyed.

The Fleet cards represent the various spaceships the player can command to intercept opponents and secure regions of space, upgrades, and tactical effects.

Spaceships come equipped with standard weapons and armor, but can be upgraded when deployed. The number value on the Spaceship indicates its strength and the small “pips” indicate how many upgrades can be attached to it. 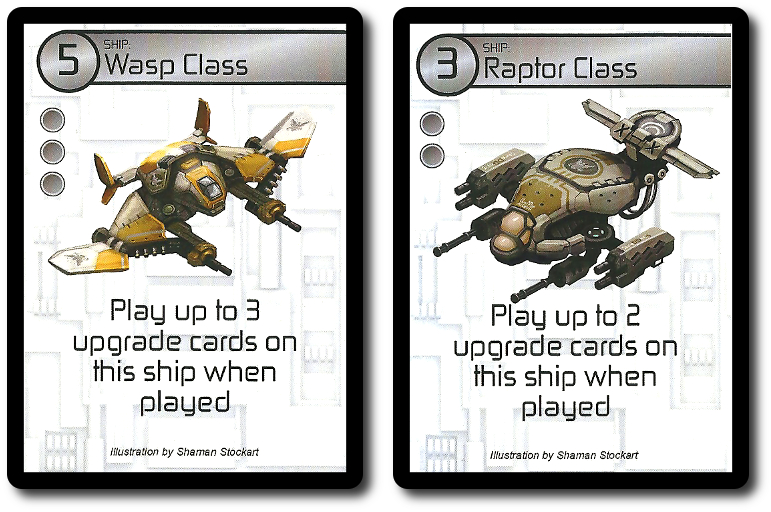 Some Spaceships have additional abilities that give them dual purpose. For example, the ability to escort larger Spaceships (allowing the deployment of 2 Spaceships at once) or the ability to return to the player’s hand if no opponents are encountered. 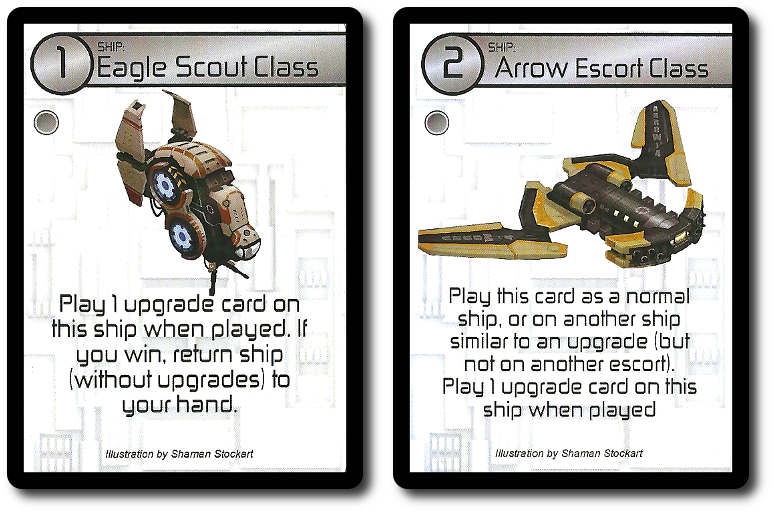 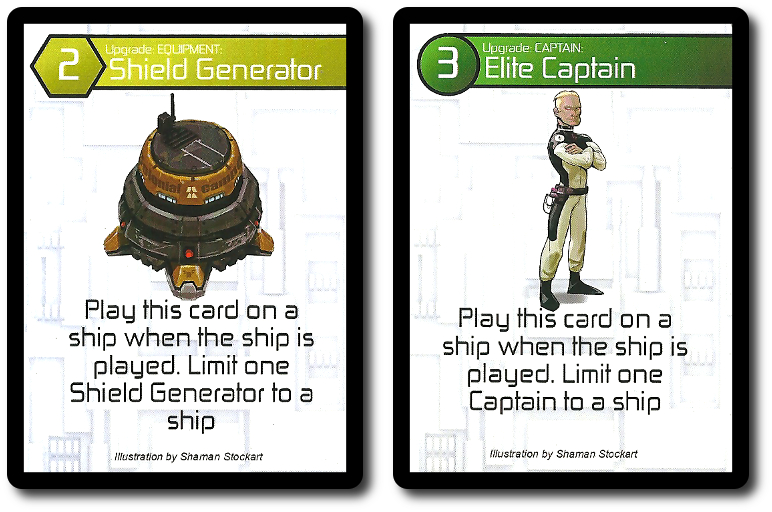 A savvy captain knows that there is more to winning a battle than just having “big guns”. To be victorious and beat the odds, tactical maneuvers must be taken. Battle Damage and Tactic cards give the player a slight edge, but do not promise victory. 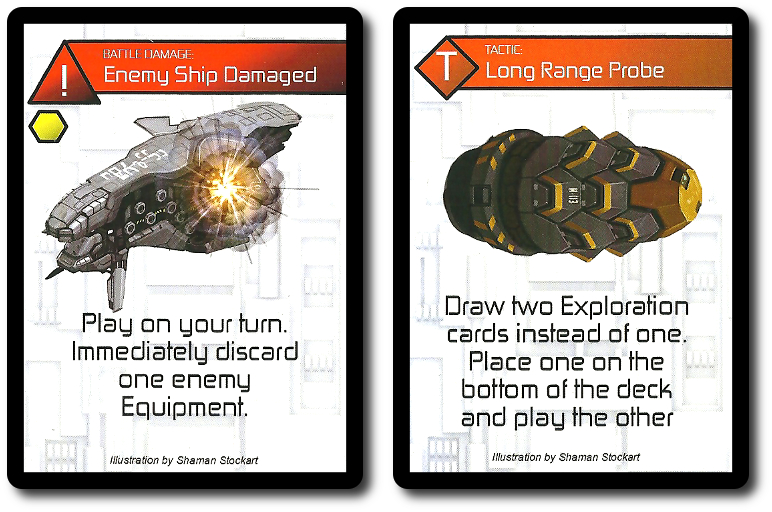 The universe is filled with miraculous planets and strange astro-anomalies, but the distance between these gems is vast, black, and cold.

Planets are not rare, but they are difficult to find. When a new planet is found, it immediately becomes contested ground. The overall value of the planet is determined by its number value. Strategic bases are also desirable targets. 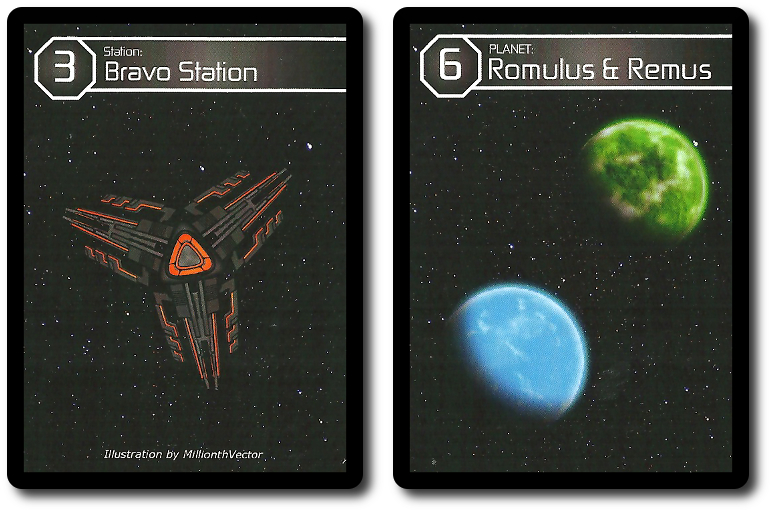 Sometimes more than a planet is revealed resulting in a unique find. These rarities often twist the rules of engagement or scoring normally followed by the players. They still remain valuable, however, as every inch of space can be claimed and held, allowing the player to strengthen their own borders. 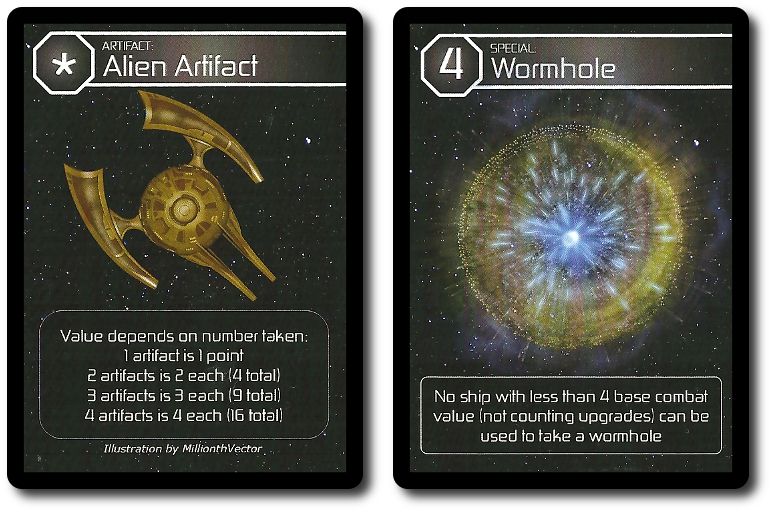 War in the Heavens

Conquest Among the Stars is played in rounds. During each round, a player will have 1 or more turns. A round of game play is summarized here.

Whomever was designated the first player for the first round will draw 3 Fleet cards, adding them to their hand. Then they will draw the top-most Explore card and place it face-up in the middle of the playing area. Regardless of what was drawn, the player who found this area of space must now lay claim to it by playing at least 1 “Spaceship” Fleet card. The player can also play Upgrades if they so choose. All cards played by a player are placed face-up in front of them.

Beginning with the opponent to the first player’s right, each player can now choose to play 1 “Spaceship” Fleet card, supporting Upgrades. Playing cards is optional and a player can pass on their turn. Passing does not remove them from the round, but it will be very difficult for them to join the battle later.

Step 3: Ending the Battle and Collecting the Spoils

When every players decides not to add any additional cards or cannot, the battle is over. The player who has the highest Combat value wins and takes the Explore card. Explore cards are placed in front of the player who collects them and remain face-up for the duration of the game.

All cards played during the round are then discarded unless another rule says otherwise.

The round is now over. The next player in turn order sequence will now draw 3 Fleet cards and reveal a new Explore card. This continues until the game comes to an end.

Masters of the Stars

If the players like, the initial hand of cards can be reviewed and any cards it may contain can be discarded. For every 2 cards that are discarded, 1 new card is drawn. This allows the player to remove cards from their initial hand, but there is no guarantee that the new cards that replace them are any better.

To learn more about Conquest of the Stars, visit the game’s web page.

The Child Geeks loved the game’s theme and the artwork. They also learned how to play the game very quickly and demonstrated a real knack for spending way too many cards than necessary. According to one Child Geek, “If you are going to go, go big.” Big they did, playing very large cards to claim very small planets. Math-wise, it didn’t make any sense to do so, but the Child Geeks were loving it all the same. They quickly discovered, however, that there is more to the game then just playing cards. It’s what you don’t play that counts. As one Child Geek put it, “You can’t play all your cards or you won’t have enough to capture planets later on.” Very true. Players only get to add more cards to their hand on their turn, forcing each player to consider the value of the reward to be won when engaging their enemies. While not difficult, it did cause some analysis paralysis. Regardless, all the Child Geeks loved the game and voted to approve it. 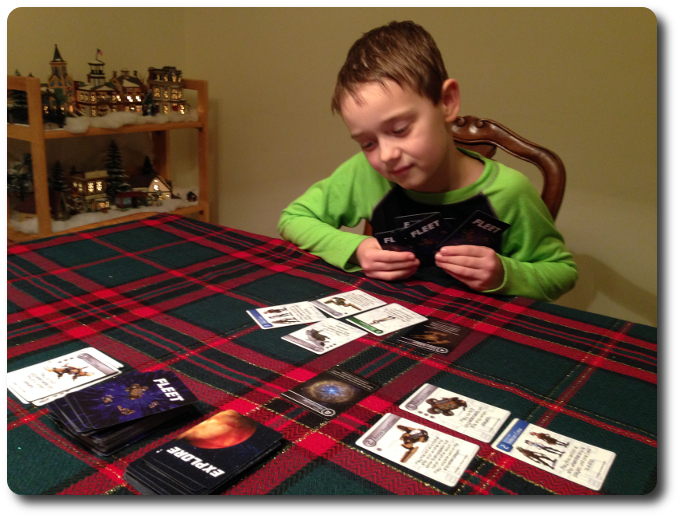 The Parent Geeks appreciated the game’s straightforward game play and enjoyed playing it with their Child Geeks. The game did not fair well when just the Parent Geeks played it. According to one Parent Geek, “The game gets kind of boring and frustrating. I couldn’t do anything for 3 rounds.” The Parent Geeks also learned, the hard way, that playing too many cards up front reduced any chances of winning planets later until such time more cards were collected. Even then, having “Spaceship” Fleet cards in hand didn’t mean you were going to be able to play during the round. As one Parent Geek put it, “If the player to your right has just 1 more point of strength than you, you can’t do jack.” The Parent Geeks decided to give the game a mixed level of approval. They found it to be fun to play with their kids and younger gamers, but was not a good time among their peers.

The Gamer Geeks didn’t care for Conquest of the Stars at all. According to one Gamer Geek, “I like what the designer is trying to do, but the game is too random and there is way too much hamstringing of the player.” Which is to say, the game does not allow players to collect more cards more often, forcing them to be exceedingly conservative with their card plays or run the risk of not being able to play at all. As one Gamer Geek put it, “Any game that wants you to play, but then doesn’t allow you to do so, is broken in my book.” The Gamer Geeks rejected Conquest of the Stars.

I wouldn’t say that Conquest of the Stars is broken, but it’s a game that greatly limits a player’s ability be effective. This is not a game you win by playing a lot of cards. Rather, this is a game where you must first and foremost determine if the prize being sought is worth the effort. If it is, then you must decide how much you are willing to pay. Finally, you must attempt to either bluff your way to victory or flat-out steamroll over your opponents.

In many respects, and I’m surprised that none of our players suggested as such, Conquest of the Stars is all about gambling. The cards being played are the equivalent to Poker chips. How many an opponent had is  hidden, but I can force my opponents to reveal to me how badly they want the card. With that information, I know how I should play.

Getting new cards only during your turn is difficult, but does not stop the player from playing. If you run out of “Spaceship” Fleet cards, you are out of luck. A player must manage their hand with the knowledge that each battle they wage will require at least 1 “Spaceship” and not every planet that is revealed is worth fighting for. The consequences of being too greedy or too aggressive is the inability to play effectively, as any card played is lost.

Conquest of the Stars is a fast and interesting card game that puts subtle emphasis on evaluation of worth and the all important need to manage your hand. Not every card is worth fighting for, but every card does move the player closer to victory. Makes for some interesting decision making in a game that is relatively straightforward. If you enjoy fast card games where victory is a matter of restraint and thinking ahead, do sit down and play Conquest of the Stars.