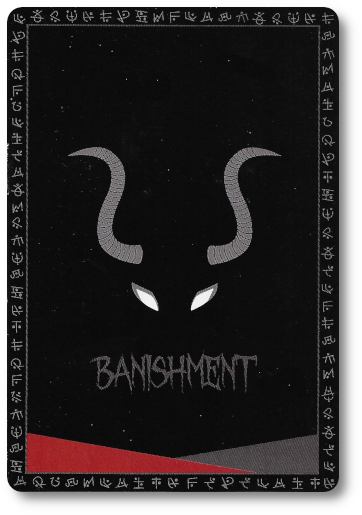 English singer-songwriter and actor, Eric Burdon, said “Inside each of us, there is the seed of both good and evil. It’s a constant struggle as to which one will win. And one cannot exist without the other.” In this game, evil and good take different sides, fighting against the other for control. Time is on the side of evil, but those who champion good have many tools at their disposal to obtain victory. Who wins between the two is a matter of smart card plays and impeccable timing.

Banishment, designed by Kim Larking and published by Dark Mirror Games, is comprised of 35 Exorcist cards, 23 Demon cards, 18 Ritual cards, and one Demon die (a standard ten-sided die). The cards are as thick and as durable as your standard playing card. Artwork, also by Kim Larking, is minimal but adds to the game’s thematic nature.

Third, determine which player will be the “Demon” for the game. Have them draw three card from the Demon draw deck and give them the Demon dice which should be set to “1”.

That’s it for game set up. Time to see if evil can be defeated!

Banishment is played rounds and turns with a maximum number of ten rounds per game. A round of game play is summarized here. Exorcists go first in the game and in any order, with each Exorcist having one turn per round. The player who took on the role of the Demon always goes last in the round.

The first thing the Exorcist does on their turn is draw one Exorcist card, adding it to their hand. Exorcists cards give the Exorcist player additional actions they can trigger by playing the cards. Thematically, these cards represent items and spells used by the Exorcists to thwart the Demon’s evil plot.

After drawing the Exorcist card, the player can take one of three possible actions. Some cards can be played at anytime. These cards do not count as an action. 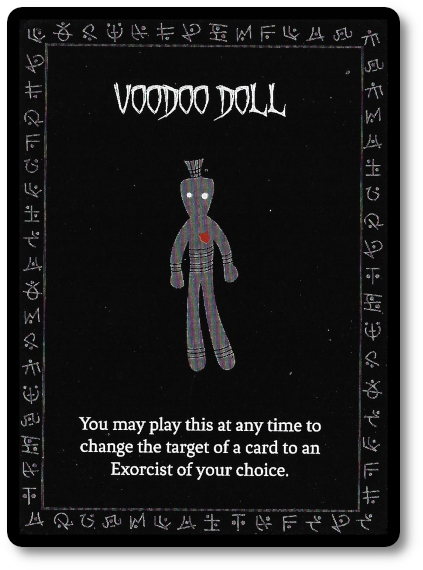 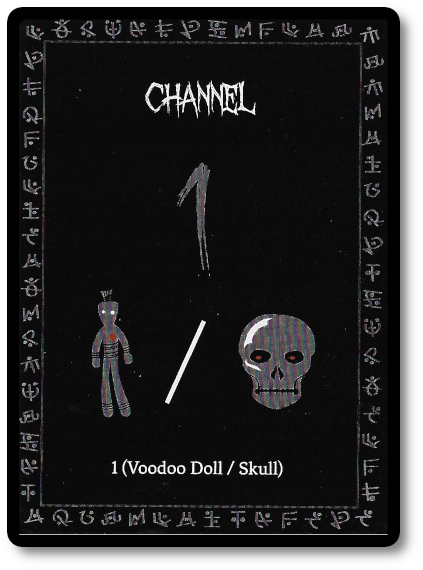 It’s now the Demon’s turn. The first thing the Demon does is increase their Demon dice value by one. They then draw a Demon card (or two, if playing with four to five players). The card goes in the Demon player’s hand.

Demon cards focus on removing components from rituals and messing with the Exorcists, either by removing cards from their hand or forcing them to lose turns. 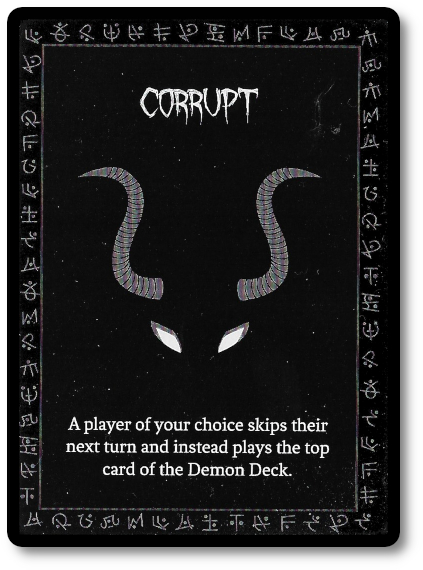 After the Demon player takes their actions, their turn is over. They must now discard down to no more than seven cards in their hand. This ends the round.

The game continues as noted above until one of two conditions are met.

Banishment can be played by two players only, wherein both players take on the role of Exorcists. When it’s the Demon’s turn, cards are played from the top of the Demon draw deck, with the players taking turns determining which player or card the action targets. The Demon die value increases each round as normal with the game being lost or won in the same manner as the standard game.

Banishment has an expansion variant named Cult War. I won’t go into anymore detail about it, as it requires two copies of the game to play. Having only one copy, we didn’t bother to do anything with it.

To learn more about Banishment, visit the game’s web page.

The Child Geeks enjoyed the game, but really only when they were working on the same team. According to one Child Geek, “I don’t like being the bad guy. It’s lonely and you always feel like you are being the one beaten up.” Which you are. Another Child Geek said, “I like the game OK and like working with my friends to take on another player. Not sure what an Exerciser is, but I think they are cool.” I think by “Exerciser”, the Child Geeks means “Exorcist”. The Child Geeks had no problem understanding who the Demon was supposed to be. When all the games where over, the Child Geeks all agreed that the game was fun enough to play again, but not many wanted to be the “bad guy”, resulting in some interesting means and ways to randomly select who was the odd player out. While they worked on that, they decided that they all liked the game enough to endorse it.

The Parent Geeks found the game to be OK, but some of the more conservative players in our group were turned off by it. According to one such Parent Geek, “The game is fine, but I’m not a fan of the pentagrams and obvious Satanic references the game has, making light fun of something I find to be very serious.” In truth, the game leans a bit on witchcraft and such (pentagrams, sacrificial knives, voodoo dolls, etc.), with strong thematic elements of the occult and spells. Sure, that is an easy dotted line to Christian dogma when it comes to “good” and “evil”, but it’s important to point out that the game does not champion or suggest that one side is better than the rest. It’s just thematic elements. This was not lost on some of the Parent Geeks. As one Parent Geek put it, “The game is fun enough, has a bit of a dark side, but plays it off. I never felt like I was really a demon or I was ever an exorcist. They are just words and descriptions for the player.” When all the curses and summons were over, the Parent Geeks took a vote, giving Banishment a mixed approval.

The Gamer Geeks found Banishment to be way too simple for their taste. According to one Gamer Geek, “The game mechanics and game play are boring. Draw a card and play it or don’t. I like that the game has a set time, meaning it will end, but that can make some games feel one-sided, as some players just can’t get enough cards in time to beat the demon.” Another Gamer Geek said, “The game is OK, but not great. Nothing I would ever get excited for or want to play again. Left me feeling numb, which is not good or bad.” None of the Gamer Geeks wanted to banish the game outright, but nor did they want to summon it to the table again to play, resulting in the gaming elitists rejecting Banishment.

This game pretty much plays on rails. The only decision the players need to do are easy to consider. Th Ritual cards and what they need in order to be completed are visible to the Exorcists right from the start. This means the Exorcists know exactly what cards they can get ride of and what cards they can play for actions versus completing Ritual card requirements. Not much thought needs to go into the game at that point other than card play timing. Likewise, the Demon player need only ever consider which card they should play to slow the Exorcists down. Even then, any card they play is not a game changer. The Demon player acts as a speed bump, slowing the progress of the other players, but never capable of fully stopping them.

The game doesn’t feel exciting as a result. All the players know where they stand with the only surprises being what random obstacle the Demon player throws at the Exorcists. This was fun at first because it was new. After playing the game a few times, all the players knew what to expect and could plan for it. The end result is a game that players more or less just went through the motions to complete, not finding much in the way of a challenge. The two-player variant further reinforces this fact, making the Demon player obsolete without taking out any of the game’s action. Which begs the question, why have a real person sit as a Demon player in the first place?

As for me, I didn’t like the game or hate it. I also felt fairly numb towards it when the games were over. I think the most entertaining role in the game is an Exorcist because you get to have fun with your fellow conspirators. The Demon player is just throwing cards. Not much thought goes into that job. Which works great for new players, by the way. If you want to teach someone this game, make them the Demon.

If you are looking for a cooperative game to fight evil while evil fights back, do take a look at Banishment.