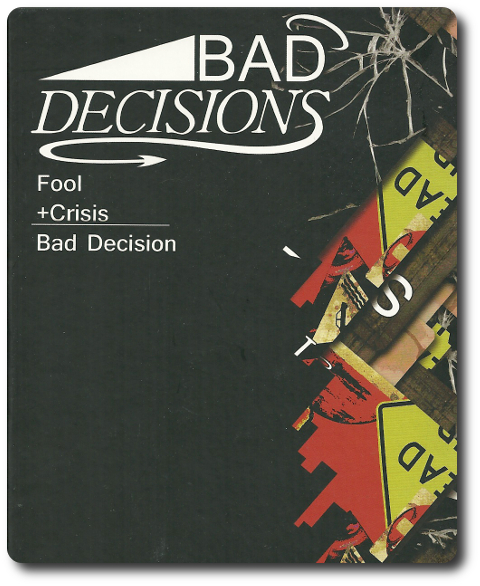 Sergeant Stryker, in the film Sands of Iwo Jima, says “Life is tough, but it’s tougher if you’re stupid.”So true. For those poor souls who are unfortunate enough to be born without common sense, just walking across the street can be full of trials and tribulations. In this game, the worse off you are, the better you do. Prepare to laugh, as stupid is as stupid does.

Bad Decisions, designed by Ian Price and published by Diamond Dust Dreams, is comprised of 200 Fool cards, 200 Crisis cards, 60 Story cards, and 200 Bad Decision cards. The cards are as thick and as durable as your standard playing card. No illustrations are found anywhere in the game.

Note: Some of the cards discuss adult situations and have more mature content. These cards are clearly marked and can be removed from the game to make it more family friendly without upsetting the game’s balance.

To set up the game, first separate the cards by type and then shuffle each pile to create separate draw decks.

Third, shuffle the Story cards and pass the deck to the first player. The player with the Story draw deck is referred to as the “Bard”.

That’s it for game set up. Time to tell a story.

Bad Decisions is played in rounds. A typical game round is summarized here.

The Bard now draws the top-most Story card and reveals it by playing it face-up in the middle of the playing area.

The Bard now draws the first 2 cards, as indicated by the Story card. These are placed face-up next to the Story card and in the order in which they are required by the story.

The story is not yet complete! Each player (except the Bard) now selects 1 card of the matching type that is indicated by the Story card to complete the story. The selected card is placed face-down and passed to the Bard. Once the Bard has all the cards, they are shuffled and the Bard reads each one in turn. 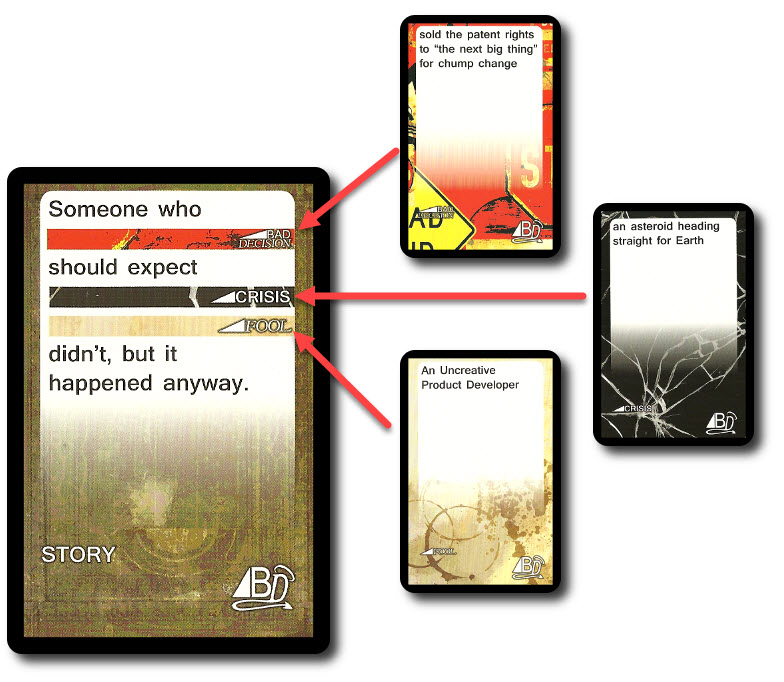 The Bard picks 1 card given to complete the story as their favorite. The owner of the card is awarded the Story card. All played cards are discarded and new cards are drawn to replace them, going back in the player’s hand.

This completes a game turn. The role of the Bard and the Story cards are now passed to a new player.

The game can be won several different ways.

The Child Geeks laughed and laughed and laughed. They had a blast coming up with hilarious combos and ridiculous responses. According to one Child Geek, “There are no bad cards in this game, but there are certainly funnier cards.” Another Child Geek said, “The best way to play this game is to have fun. Think of the funniest thing you can do and play that card.” In truth, the Child Geeks ended up laughing at their own responses as much their opponents. There were several games played where points weren’t even scored. Turns out the players were fine just with playing the game and left the competitive portion of the game play in the game box. As one Child Geek put it, “When you don’t play to win everyone wins!” And that certainty seemed to be the case, as all the Child Geeks voted to approve Bad Decisions.

The Parents were also entertained and found the “naughty cards” to be just the right mix between obscene and colorful. Unlike the Child Geeks, the Parent Geeks were highly competitive. Each card played was intended to be the funniest, the grossest, or the stupidest, depending on the preferences of the Bard. According to one Parent Geek, “This game reminds me of a lot of others I’ve played, but it feels somewhat different, too. I think it has to do with the different card varieties in the game.” Another Parent Geek said, “Definitely a great party game. I can see myself playing this with my adult friends. Throw in a bottle of wine and good conversation, and this game is going to be very popular.” So popular, in fact, that the Parent Geeks all voted to approve Bad Decisions.

The Gamer Geeks were not impressed. According to one Gamer Geek, “This is nothing more than Apples to Apples and Cards Against Humanity mixed together. There is nothing original here.” Another Gamer Geek said, “I’m voting this game down for two reasons. First, it’s a blatant copy of other games. Second, it’s doing absolutely nothing new.” Not all the Gamer Geeks felt so negative, however. According to one Gamer Geek, “It’s nothing new, but it plays solid. I like the different card types and it certainly made me laugh. That’s worth a few points right there.” The problem the majority of the Gamer Geeks had was the game’s overall game play. It was, in short, way too similar to other games to feel like an original game. This hurt Bad Decisions a great deal and resulted in the majority of Gamer Geeks rejecting the game.

Bad Decisions falls victim to over saturation. Games like Apples to Apples and Cards Against Humanity, just to name a few, have dominated the word game market for years making it difficult to enter and be seen as a “unique game”. None of our players thought Bad Decisions was unique and everyone immediately knew how to play before I was even done explaining the game. That’s pretty telling. What is also telling is that only the gaming elitists found this to be a fault. All the other groups mentioned the similarities, but never once let that ruin their fun.

As for me, I can take this game or leave it. I’ve played too many games like this one to make it interesting to me. It’s certainly a good party game and I might keep it around just for that. It’s also a solid game, make no mistake. It’s easy to teach, easy to get to the table, and easy to play. Fun it might be, but for some, the game will feel like a bad decision.