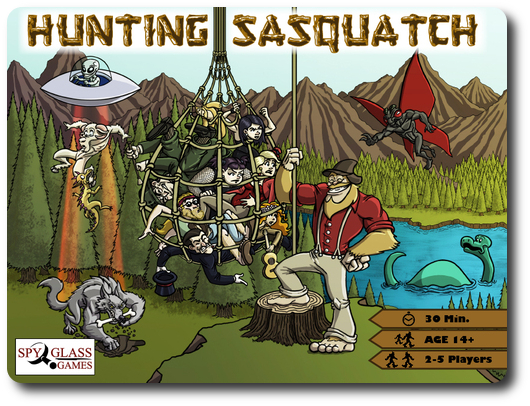 The hunt for the elusive Sasquatch (a.k.a “Big Foot”) has taken place all over the world. Due to the Sasquatch’s elusive nature, hunters must travel to remote and dangerous locations, putting their own lives at risk. But such risk is necessary in order to find proof of Sasquatch’s existence. For those who believe, no cost is too great to pay to finally bring the truth to light.

Hunting Sasquatch, designed by Jeff Arbough, Sina Hirsch, Michael Knight, and to be published by Spy Glass Games, will reportedly be comprised of 8 Hunter dice (costume six-sided dice), 1 Fate die (custom six-sided die), 54 Location cards, 72 Hunter cards, 30 Evidence tokens, 5 Wildcard tokens, 10 Horseshoe tokens, and 60 Anti-tokens. As this is a review of a prepublished game, I cannot comment on the game component quality. The illustrations by Ignacio Anibal Di Meglio, and Dan Rendon add a humorous touch, making use of pop-culture references throughout. 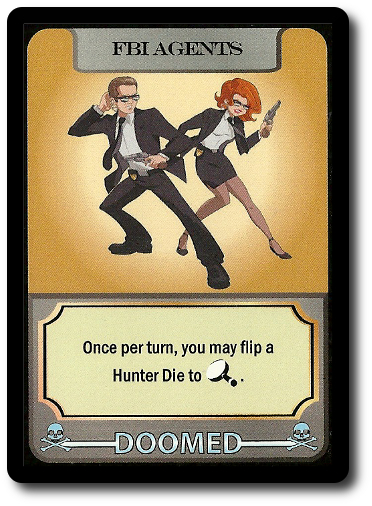 Third, organize the tokens into separate pools and set the dice off to one side.

That’s it for game set up. Choose a first player and begin.

Hunting Sasquatch is played in turns. A player’s turn is summarized here. 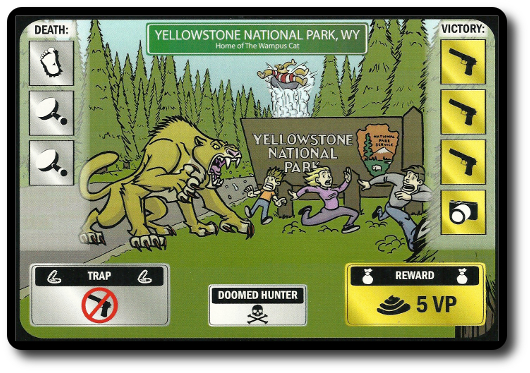 Drawn Location cards must be Explored by the player. If the Location card has a Doom Hunter symbol that matches the player’s Hunter, then the player’s turn ends. If the new Location does not doom the hunter or the player elects to Explore an existing location, they then move onto the next step.

When a Hunter dies, the player discards their Hunter card. Discarding the Hunter card may trigger the end game. If the game is not yet over, the player then discards all their Anti-tokens, Wildcard tokens, and Horseshoe tokens. They then draw a new Hunter and announce their turn is over.

The player now picks up the Hunter dice and rolls some or all of them (player’s choice). The goal is to roll dice values that do not match the Trap and the Doomed Hunter symbols. Based on the symbols rolled, the following happens.

The player now resolves the roll, having finished adjusting the die values. Again, a certain order of operations is followed.

Step 4: Playing with Fate or Traps

The Fate die can only be rolled if the player’s Hunter survived exploring the Location, but the Location itself was not captured. If they meet this requirement, they can elect to roll the Fate die or use the Trap.

The Trap, if taken, ends the player’s turn, but grants the player the Trap effects of the Location.

The Fate die is rolled and the results are resolved. A “Lucky Horseshoe” allows the player to re-roll all unplaced Hunter dice. The player resolves the dice just as they did during the first part of their turn.

A player’s turn ends either when their Hunter dies, they take the Trap for the Location, or they capture the Location.

The game continues until there are a specific number of discarded Hunter cards. The number needed to end the game is based on the number of players.

Players now count the victory points found on their captured Location cards. Unique Evidence tokens also give player’s victory points. The player with the most victory points has the most compelling evidence that Sasquatch is real and wins the game.

To learn more about Hunting Sasquatch, visit the Kickstarter campaign.

The Child Geeks immediately understood that Hunting Sasquatch was a game of risk versus reward. They pushed the envelope when necessary, but were mostly conservative when it came to their dice rolls. According to one Child Geek, “The goal is to get points, not risk it all and get nothing.” Another Child Geek said, “I like that you have the option to be really risky if you want, but I think the best way to play is to play it safe.” The Child Geeks proved again and again that “playing it safe” lead to points, but the games were longer as a result. It was only when the players were neck and neck with the game almost finished that the Child Geeks pulled out all the stops and rolled for broke. From start to finish, the Child Geeks had a blast hunting for the elusive Sasquatch, resulting in a full approval.

The Parent Geeks also enjoyed the game, but oddly enough, were less conservative than their younger counterparts. According to one Parent Geek, “If you don’t risk it all, you won’t win the game. This is all about pushing the limits and beating everyone to the finish line.” Another Parent Geek said, “I don’t know why  you wouldn’t risk everything on every roll. What you lose is outweighed by what you can gain each time.” With a very different game playing philosophy, the Parent Geeks’ games were tight, focused, and full of dramatic moments. A very different feel and game play than that of the Child Geeks. However, there was little difference between the two groups, including their overall level of enjoyment. When the games were over, the Parent Geeks voted to fully endorse Hunting Sasquatch.

The Gamer Geeks know their games and immediately recognized everything that Hunting Sasquatch was about. Which is not to say that they found the game distasteful, but some of the Gamer Geeks became immediately disinterested when they saw that Hunting Sasquatch was little more than rolling dice and resolving the results. According to one Gamer Geek, “The game doesn’t have the kind of game play that I look for. I want player interaction, in-depth game play, and tactical decision making. This game has none of that.” Another Gamer Geek said, “A good enough game when it comes to dice and risk versus reward, but I think it feels a lot more busy than it should for such a simple game.” Not all the Gamer Geeks felt so, however. As one Gamer Geek put it, “A neat mix of risk, reward, and player decision making. I like how there is more to do than just roll dice. Players get to decide a lot and that makes the game feel a lot more engrossing.” When the votes were in, the Gamer Geeks were split resulting in a mixed level of approval.

Hunting Sasquatch is a very intuitive game. It was easy to set up, teach, and play. All in less than 5 minutes. The game’s length is just right, too. Even if a player doesn’t risk anything, they are always slightly at risk of losing a Hunter. This keeps the game moving regardless of how conservative the players may or may not be. Of course, players can rush the game, which isn’t that big of a deal. The winner is the player with the most points. If playing a conservative game, than there are more points to count. If playing recklessly, there are fewer. It all balances out.

I do agree with the Gamer Geeks that the game feels a bit busy at times. Tokens swapping around and moving cards isn’t that big of a deal, but it can feel like a slight bit of overhead when all you really want to do is get points. It should be pointed out, however, that the use of tokens, dice, and cards all work together seamlessly. Whatever feeling of intrusive management of bits a player might have should be limited to nothing more than a slight nag at the back of the skull. Other than that, the game is solid. It does exactly what it sets out to do resulting in players having a good time. Do try this game when you have an opportunity to do so.