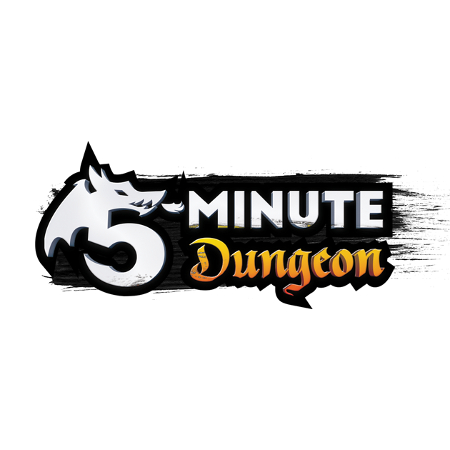 They say that the longest a hero can hope to survive in a dungeon is 5 minutes. That’s not very long, but you and a group of your heroic friends have devised a plan. You’ll jump in the dungeon, explore, and defeat the boss monster in less than 5 minutes! Some say you are crazy and they may be right, but one thing is for certain. If you are going to beat the odds, you best be quick about it.

5-Minute Dungeon, designed by Connor Reid and to be published by Wiggles 3D, will reportedly be comprised of 200 Player cards, 5 Hero mats (double-sided for 10 Heroes in total), 5 Boss mats, 40 Door cards, and 10 Challenge cards. As this is a review of a prepublished game, I cannot comment on the game component quality. The illustrations by Alex Diochon are simply fantastic, adding flavor and theme to the game with visual flair. Not included with the game, but necessary to play, is a timer that can be set for 5 minutes, can easily be stopped and reset as needed.

About the Cards and Mats

There are several different cards and mats used in the game. Each are summarized here.

Hero cards are comprised of “Resource” and “Action” Hero cards. “Resource” Hero cards represent scrolls, jumping, swords, shields, and arrows. Think of these as card suits which are used to defeat enemies in the dungeon. 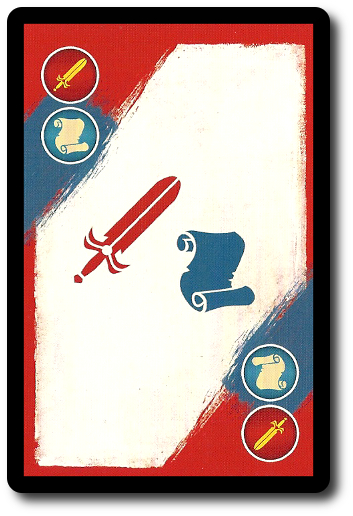 “Action” cards are unique to each Hero deck and represent special abilities only the hero can attempt. Examples include defeating certain monsters in the dungeon to stealing valuables. 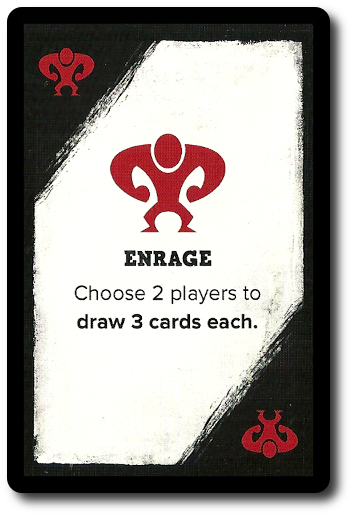 The Hero mats are double-sided, with each side representing a different hero type, but still paired appropriately to use the same Hero deck of cards. The pairs are as follows: 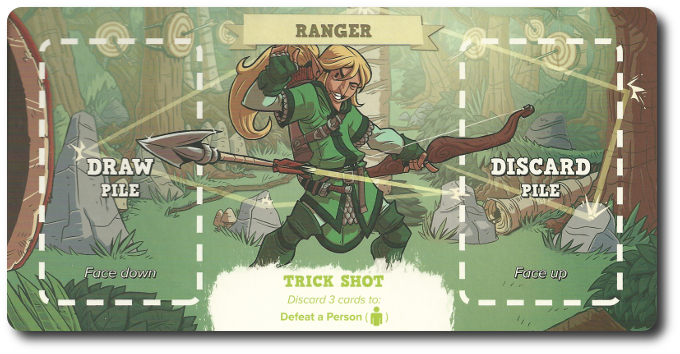 Each Boss mat represents the final boss of the dungeon level the heroes must face. The Boss mat also serves to instruct the players on how to build the dungeon and what is needed to defeat the dungeon. While not a map, it certainly does point the players in a good direction. 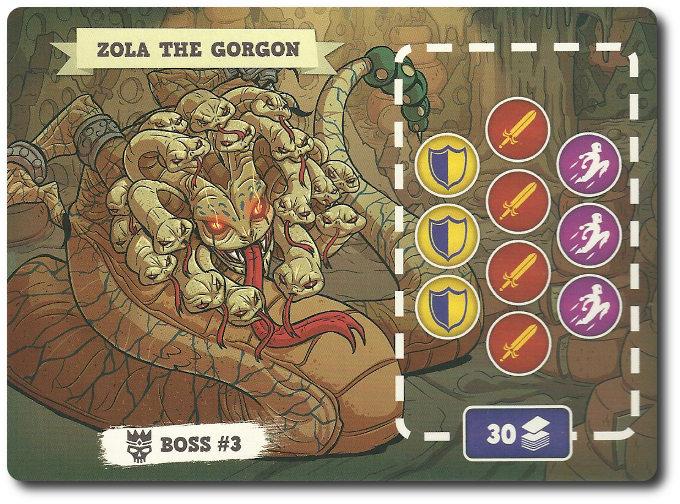 Door cards represent the many different rooms, hallways, and chambers the heroes must venture forth into. Behind each door lies a monster, obstacle, or an another encounter. Door cards are flipped, revealed, and resolved. 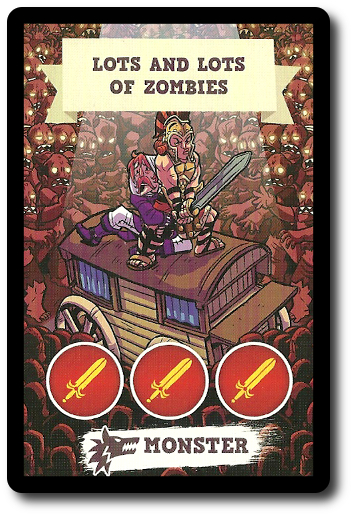 Challenge cards are a special type of Door card. Behind these doors could be a mini-boss or an event. 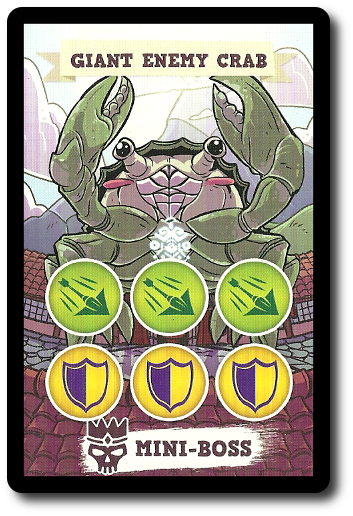 At the Dungeon’s Door

To set up the game, first have everyone select 1 Hero mat and the side of the Hero mat they want to use.

Third, have each player draw a number of cards based on the number of players. This is the player’s starting hand.

Fourth, place the selected Boss mat in the middle of the table.

Fifth, create the dungeon by adding 2 Challenge cards per player, add to it the number of Door cards indicated by the Boss mat, and shuffle. Place the deck on the Boss mat where indicated.

That’s it for game set up. Time to delve.

Down, Down, Into the Dungeon

To begin the game, first start the timer. The players have a total of 5 minutes to explore the dungeon, find the Boss, and defeat it. But time is a funny thing in this game. Time can be temporarily stopped, giving players a bit of breathing room.

Since everyone plays the game at once, there are no turns. However, there is a logical order in which the action in the game progresses. This is summarized here.

The top-most Door or Challenge card is flipped over and revealed.

All the players now lend a hand squashing whatever might be behind the door. This is done by playing “Resource” Hero cards that have matching symbols. The Resources can come from one or multiple players. Once used, a Resource card is out for the duration of the game.

Optionally, a player could use an “Action” Resource card. Like Resources, however, they are lost when used.

At anytime during the game, a player can use their Hero’s special ability. This is done by discarding 3 cards to the player’s discard pile (they are not lost).

As soon as cards are played or discarded, the player draws back up to their starting hand size.

If the player runs out of cards, they must sit back and watch the game until another player brings them back in using healing or donating cards.

There are 3 ways to lose the game.

Otherwise, if the players do defeat the Boss and they still have time left, they win!

To learn more about 5-Minute Dungeon, visit the Kickstarter campaign.

The Child Geeks had a blast with this game. It helps all players to have one individual act as time-keeper and general rules lawyer to ensure that cards being played match and the time is watched carefully. It especially helps to have this same individual call out how many minutes and then seconds remain. Doing so really puts the pressure on and adds a lot of fun. According to one Child Geek, “I think the game is a bit too fast, but it’s a lot of fun. We have yet to defeat a boss, but I don’t care.” Another Child Geek said, “When you finally get to the boss and realize that you have just enough time to defeat it, you really start yelling at each other!” And yell they did! Lots of “OH, YEAH!” and “NOOOO!” or “COME ON, GET WITH IT!” type of shouts. All in fun and all fully pressurized due to the game. Once over and the Child Geeks caught their breath, they voted to approve 5-Minute Dungeon.

The Parent Geeks, especially the non-gamer geeks, had difficulty keeping up with the Child Geeks and their frantic card plays. When played with the family, 5-Minute Dungeon was a fast paced adventure. When played with just the Parent Geeks, the game took a quiet turn and became a focused exercise in concentration and speed playing. According to one Parent Geek, “The goal of the game is very clear and how you win.  You just have to keep focusing on the objective and you’ll win every time.” Well, no, not every time. It all depends on the number of players and how conservative they want to be with their cards. Remember, a card played is a card lost. Some players take that a bit too much to heart, as did some of the Parent Geeks, and played their hand like each card was a small leaflet of gold. Regardless, all the Parent Geeks voted to approve 5-Minute Dungeon.

The Gamer Geeks found it funny that a game about a 5-minute dungeon run could take up to 30 minutes to complete. That didn’t stop them from enjoying every second of the game, however. According to one Gamer Geek, “I really like  this. Simple rules and simple game play, but with the added time crunch, everything becomes much more complicated. It’s a really good game.” Another Gamer Geek said, “A great example of a real-time strategy and cooperative game. Not as chaotic as I had feared, which is good, but just as fast as I was hoping for.” All the Gamer Geeks agreed that 5-Minute dungeon had just the right mix of speed, dexterity, and cooperation to make it an excellent filler game. They all voted to approve it except for one Game Geek who said, “The game is just too damn fast for my small little hands!” Let the men with small hands be forewarned…

As for me, I really enjoyed my time with the game. It didn’t once get old. Each kicking down of the door seemed to send a shock through the players who were challenged to keep the energy level up and the focus razor-sharp. The most entertaining aspect for me was the cooperative element. A player could contribute all they needed to defeat the monsters, but doing so reduces their effectiveness in the long run. It was this balance between short-term gains and long-term goals that struck me as a clever meta game for the players to figure out on their own.

Do play this game when time allows. It’s fast, fun, and ferociously delightful as you and your friends attempt to beat the clock and everything that possibly comes your way. I guarantee the game will frustrate you one second and then reward you the next. While you might feel a bit rushed, you will be sad when the game is over.